Kitten Found Alone Near The Forest, Climbs On Cyclists And Never Leaves Them 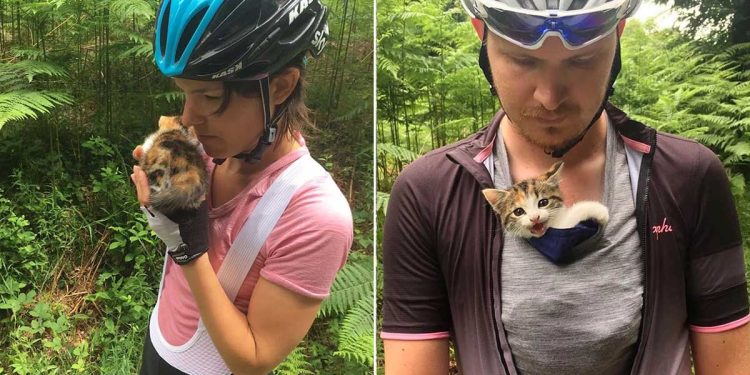 In the fields of central Brittany, France, an adorable kitten who was found wandering alone in the forest, luckily receives help from a couple of cyclists who were passing by and could hear him.

The married couple were riding their bikes in the woods when they heard a loud noise coming from the bushes. They both stopped to investigate to see what it was and they found the little kitten wandering alone in the forest.

Celine and her husband, Daniel, initially thought it was a bird, but the loud sounds were actually meows for help from the kitten.

We were crossing a very quiet road and passing through a forest with no houses nearby, when suddenly we heard a loud scream coming from a fern on the side of the road.

At this time, the kitten was very frightened and distressed, he did not want to approach the married couple and even tried to get away from them.

The woman had no choice but to sit on the ground and speak to him in a low voice in an attempt to gain the trust of the little feline. After a while, the feline realized that the couple did not want to hurt him and approached Celine to receive many hugs.

She wouldn’t let me. He kept climbing on top of me (with his claws) and crying. We knew we had to try to get her home.

The return trip was long, but in an attempt to bring her back safely, Daniel stuffed her into his shirt. However, the kitten was very restless and constantly trying to get out, so they decided to go home without her.

They left her in a hiding place and quickly drove home to get back into their car, hoping the feline wouldn’t wander off.

Once home, they took a cardboard box and started the journey to the forest as quickly as possible.

As soon as I got out of the car and called her, she came out of hiding and ran towards me.

The sweet feline jumped into Celine’s arms and started climbing, trying to say she was ready to go home with them.

His wish was granted and the first night in his new home was spent having a thank you grooming session for Daniel.

During the following days, the kitten named Mini Kitty, adapted to her home, fed like a champion and rested a lot to recover energy. No matter what she was doing, she was always close to Celine and Daniel, apparently that way she felt safe to go about her business.

The affectionate Mini Kitty became a hugging machine and since then she hugs anyone or anything that is close.

She is a beautiful cat, very kind and playful. As soon as he hears us get up, he runs up the stairs to greet us.

Mini Kitty is the youngest in the family, but she gets along very well with other pets due to her sweet attitude.

The sweet cat is very affectionate with everyone and has such an attractive personality that she makes anyone’s day.

Three years after being rescued, Mini Kitty isn’t that shy little kitty anymore, but some things never change and she still embraces her loving parents.

Daniel and Celine appeared in the life of the sweet cat when she needed them most and, surely, she will be eternally grateful to them.