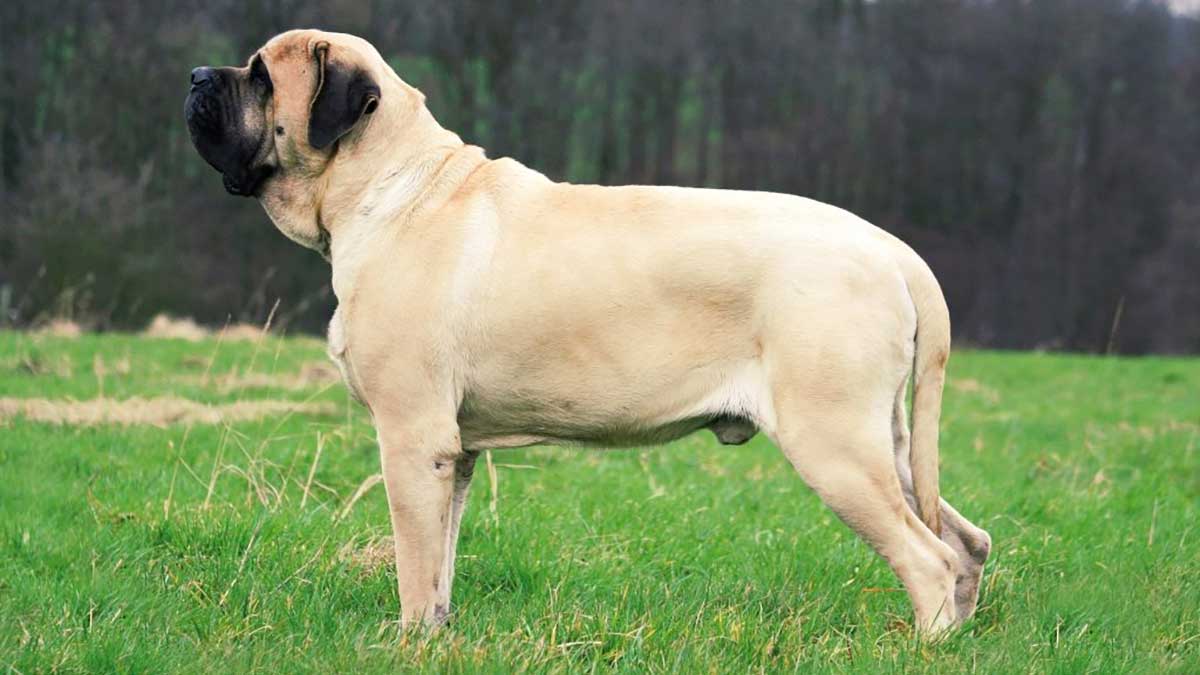 The list of the rarest and largest breeds includes the English mastiff. It would seem that such a huge dog is hardly suitable for apartment living, but in fact, a calm, adequate and good-natured English mastiff coexists perfectly in the house. The main thing is to properly care for him and adhere to all the rules of detention.

This smart dog will become your faithful friend and bodyguard. The English mastiff, by its very appearance, can inspire fear in enemies, while at the same time it is affectionate and even playful for the household.

English Mastiff dogs are distinguished by their strong affection for the owner and express their love by “calling” to embrace and soak up the couch together.

Physical characteristics of the English mastiff

English mastiff belongs to large breeds. This dog is proportionately folded, massiveness and power are felt in all parts of the body. A mastiff is a real athlete. The weight of adults is 55-114 kg. with a height of 70-76 cm. Although there are exceptions, a dog is known whose weight has reached 130 kg.

The head is large, it rests on a strong, not too long neck. Due to the wide-set ears, the already wide skull seems even wider. The ears are small in size. The forehead in the skin folds, the superciliary arches are convex. The muzzle is short, wide. Big nose is flat, but not snub-nosed. The lower jaw is powerful, wide.

Between an extra walk and a rest in the warmth of the family hearth, the English Mastiff will choose the second: these dogs are known as avid couch potatoes.

Build strong, muscular. The back is straight, the chest is voluminous. The stomach is a little picked up. The limbs are straight, muscular, and the bones are thick. These legs can withstand heavy loads. Paws are rounded with black, curved claws. The tail is thick if the dog is agitated, can keep it raised, but not above the line of the back.

Coat short, thick. It is noted that the hair on the neck and on the head is softer. There is a dense thick undercoat. English mastiff colors allowed as follows:

There is a black mask on the face.

Character and temperament of the English mastiff

The ancestors of today’s English mastiff dogs were formidable fighting dogs, not knowing fear and not knowing how to give up, retreat in front of the enemy. Now modern representatives of this breed have pacified their temper, have become calmer and more adequate. Although the watchdog, security features remained at the highest level, as well as a formidable look that could already frighten away an uninvited guest from afar.

In any family, with a good attitude towards the mastiff, he becomes the favorite of all household members and a devoted friend. The following features are present in his character: self-confidence, ability to make decisions independently thanks to intellect, kindness, tenderness for children, calmness, obedience.

Mastiff plays with children with pleasure, but not for long, he does not like this big dog to be active for a long time, he is more pleasant to sleep near the owner’s feet. Alone with very small children, leaving such a large dog is not recommended, it can accidentally push the baby.

The English mastiff does not trust strangers. He is suspicious of them. The dog will surely try to stand between the stranger and the owner, so that if necessary, protect. Property and territory under the supervision of a mastiff is safe. Representatives of the breed do not like to bark, they do it rarely. But one kind of big dog and a grin of powerful fangs is enough to intimidate thieves and other ill-wishers.

Dominant character and natural stubbornness are the main reasons why the English mastiff is not suitable for beginners.

It would seem that such a big dog as an English mastiff is completely unsuitable for apartment maintenance. This is partly true, the dog feels much more comfortable in a spacious enclosure with a huge, warm booth than in a cramped one-room apartment. But on the other hand, if there is a large private house or a spacious mastiff apartment, it will not cause inconvenience with its presence.

Such dogs have no habit of running from room to room or chewing on household items. A pet can spend hours lying quietly next to its owner for hours. The main thing is to walk the dog daily, give him the necessary physical activity. It is difficult to interest him in the game, since by nature the mastiff is lazy and not inclined to active games. With small puppies you can’t go far, their unformed joints can suffer from this, and the puppy will get tired from such overloads. In the house, arrange a couch in an impassable place.

Although the English mastiff is huge, it is not difficult to take care of it. The owner must comply with the following care rules:

It is recommended to comb every day, especially if the dog lives in a living room. Thus, there will be no dog hair in the house, and the dog herself, along with a skin massage, will get rid of dead hair. The owner should know that the English mastiff sheds a lot.

Frequent bathing is not required, only as needed. Human shampoo for a dog is not suitable, it can cause itching and irritation, especially if the animal is prone to allergies. Skin folds can be wiped with a damp cloth soaked in plain water.

Ears and eyes are inspected and rubbed once a week. For this procedure, it is worth buying special fluids, cotton buds and tampons in a veterinary pharmacy. If you notice excessive discharge, inflammation or other symptoms indicating an infection, urgently show your pet to your veterinarian.

In most cases, the English mastiff combes its claws on the road surface while walking. If this does not happen, they must be cut as they grow.

All pet hygiene procedures must be taught from a young age. Thus, he will learn to calmly endure both combing and bathing.

The English Mastiff needs to be given food at exactly the same time. Adult animals are fed twice a day, puppies are fed 3-6 times a day, depending on their age. A sexually mature mastiff eats about 1.5 kg per day. The owner of such a dog should know that his pet is prone to obesity, therefore, as soon as they notice that the dog is getting fat and its weight is above the norm, review the diet and reduce the number of calories. Clean, cool water should always be in a bowl.

Once it was a ferocious and cruel dog that easily coped with predators, but over time, the English Mastiff turned into an intelligent, calm and balanced pet;

If you properly maintain and feed the English mastiff, he will live next to you for 13-14 years, also well-known centenarians who were able to survive to 17 years. Each dog owner should get acquainted with the list of the most common diseases that pursue the indicated breed:

In hot weather, you should not take the English Mastiff for a walk; walking the mastiff is recommended in the morning or in the evening, when the air temperature is not as high as during the day. The fact is that representatives of this breed tolerate heat very poorly and can quickly receive heat stroke.

Be sure to carry out routine vaccination. Worm preparations and pet treatment for skin parasites are also important. Preventive examinations and tests in a veterinary clinic will help prevent the development of many diseases. The owner should not forget that the animal must receive the necessary amount of vitamins and minerals.

The English Mastiff is not suitable for families with young children and overly active people.

Any guard dog, and even a large one, needs early socialization and training. An untrained English mastiff becomes uncontrollable. Serious training should begin at nine months. If everything is done according to the rules and alternatives, training a mastiff is a simple matter. The main thing is patience, calm and no screams, let alone physical punishments.

The first stage of training is to consolidate the simplest commands: “sit”, “next to”, “not”, etc. The second step is to take a dog and city training course. If you want the English Mastiff to become a real bodyguard, take a course “dog-bodyguard” with the dog handler. You can deal with your pet yourself, but with an experienced specialist, training will be much easier and more effective.

Learning commands is by no means a priority for the English Mastiff, so you will have to make an effort to train fruitfully.

English Mastiff is a great pet. But keep in mind that large dogs must be in control. Below are all the advantages and disadvantages of this breed, this information will help determine whether such a dog is suitable for you or not.

The English mastiff breed originated more than 1000 years ago. The birthplace of these giant animals is Great Britain. They came from old English Molossian dogs. Until the beginning of the nineteenth century, English mastiffs were at the peak of fame and popularity. They were worth its weight in gold. For example, if there was an exchange between owners of working dogs, then for one huge and vicious mastiff, without regret, they gave two dozen hounds and greyhounds.

The popularity and fabulous price of a mastiff is explained by the fact that the owner of such a dog could not worry that thieves would get to him. One could not find a more reliable guard; he scared away all the thieves in the area with his appearance, he did not even need to bark for this. It is known that such dogs were kept at fortresses and castles.

Also, those who wanted to make money on their powerful pet did their best to use the fact that a mastiff, having got involved in a fight, never backs down, even if it threatens him with death. These dogs were bled with wild boars, bears and even bulls. There are cases when both rivals died in a fight at the same time. For example, if a mastiff squeezed a bear’s throat with fangs, then in death agony, it tore its claws from the dog. Even English mastiffs were noted as fighting dogs in the Roman army and as hunting dogs.

The breed is an English mastiff so ancient that it was not reliable to establish its origin. One of the most real versions of the “claims” that these large dogs came to England with the Celts. The main purpose of the mastiffs was to participate in battles with wild animals and the security and guard qualities of these animals.

Breeding purebred English mastiffs was at its best in the 15th century. It was during this period that there were many images and descriptions of these dogs in works of art. At the beginning of the nineteenth century, the fashion for mastiffs decreased slightly, this is explained by the ban on dog fights. After this, the mastiffs practically disappeared, they were afraid to start such aggressive dogs. Powerful mastiffs could not provide winnings to their owners, but it was in their power to protect the property.

By the mid-twentieth century, the population of English mastiff dogs was restored. In the modern world they are used as bodyguards, guard dogs, as well as ordinary companion dogs. It is believed that this is one of the most popular dog breeds.