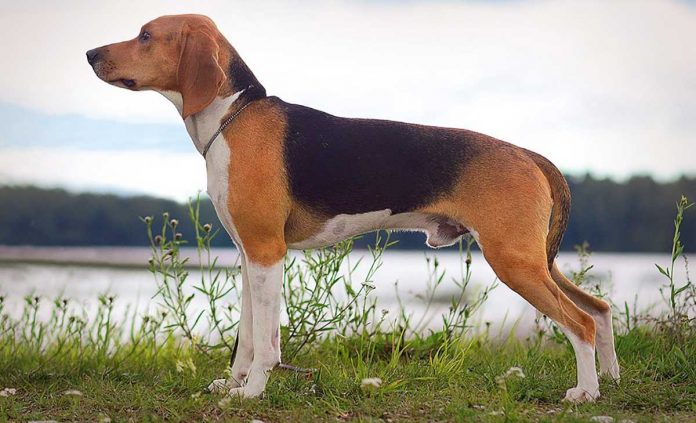 The breed of dogs in question is from the Baltic States. The Estonian Hound is a hunting gun dog. It is valued for its perfect flair, endurance and poise.

The owner of the hound must be an active person, as he has to provide his pet with a sufficiently high level of physical activity.

With the right upbringing, an Estonian Hound becomes not only an indispensable assistant during the hunt, but also a loyal companion, a cheerful playmate.

The homeland of the Estonian hound is Estonia. The specified hunting breed arose when the Baltic States were part of the USSR. Formation, development took place in the first half of the twentieth century.

The “parent” of the breed is quite rightly considered S.А. Smelkov. This dog handler has been working on the improvement of the Estonian hound for more than two decades. It was necessary to create a dog that met the following requirements: compact, height no higher than 45 cm, loud-voiced, hardy.

Such requirements were explained by the fact that in Estonia a decree was issued prohibiting the use of large, tall hounds during hunting. That is why lovers of hunting with dogs urgently needed hounds that meet the above requirements.

For breeding work on breeding the Estonian hound, the selection of sires was carried out among different types of hounds: Anglo-Russian, Russian, Finnish, Swiss, etc. The main selection criterion is medium-sized dimensions.

As a result, the breeders managed to bring out a new variety of hounds – the Estonian one. From the breeds whose genes were used in breeding work, the Estonian hound inherited:

The Estonian Hound does not differ in large dimensions, but all parts of the body of this dog are well-developed muscles.

Neck without skin folds, strong. It carries a medium-sized head, round, not too wide. The ears are pendant, long, with rounded tips, of medium thickness.

The eyes are dark, almond-shaped. The muzzle is straight, in profile it looks rectangular, long. The nose is large, with well-open nostrils, and is black.

The jaws are powerful. Scissor bite, large, healthy teeth. The lips are not pendulous, tight-fitting.

Stretched body. The loin is convex, wide, not long. The back is also broad and straight. The ribcage is barrel-shaped, deep, voluminous. The belly is slightly tucked up.

The tail is of medium length. It has a saber shape, rather thick.

The legs are of medium length, well-muscled. The paws are oval, the toes are tight, arched. Claws are strong, directed to the ground.

The coat is short. The outer hair is shiny, even. Tough to the touch. There is an undercoat, but it is insignificant, poorly developed.

When hunting in the wild, the Estonian hound itself becomes wild, passionate, aggressive. But all this anger is shown only in relation to the prey.

Once at home, the Estonian hound turns into a kind, affectionate, playful creature. In the circle of her family, he does not have a drop of anger and aggression.

The hound is infinitely loyal to its master. With the right upbringing, he unquestioningly listens to him, clearly following all the commands.

Tolerant to children. He plays with them with pleasure, but will not allow himself to be offended. So the parents should immediately teach the child to respectfully treat the Estonian hound with care.

He behaves cautiously with strangers, but does not show much anger for no reason. If he sees danger, he will be able to stand up for himself and for the family, but as a watchman, you should not rely on a hound.

He gets along well with pets, provided that they lived in the house before the arrival of the Estonian Hound there, and provided there was no dominance on their part. The hound perceives new pets as “invaders”, and as a result, conflicts arise.

Estonian dogs easily converge with other dogs. He is ready to run for hours with them, frolic. He doesn’t like cats. Small pets, rodents can be mistaken for prey, so keeping these animals together with the hound is not recommended.

The average lifespan of an Estonian hound is 11-13 years. In order for the pet to live for the maximum number of years, the owner must provide him with proper care, nutrition and decent maintenance.

It is important to closely monitor the condition of the dog on a daily basis in order to notice possible symptoms that signal the disease in time.

For example, if an Estonian hound refuses food, water, and you notice diarrhea or vomiting, an urgent need to seek help from a veterinarian.

Many health problems can be avoided. To do this, it is necessary to visit the veterinary clinic with the dog annually for preventive examinations, do deworming regularly, carry out routine vaccinations and treat with drugs for skin parasites.

Being naturally healthy, the Estonian hound, like all living things, sometimes gets sick. Most often, representatives of the breed suffer from the following diseases:

You can keep a hound in a private house, in an apartment or in an aviary. But there are some nuances of the content:

With any method of keeping, it is necessary to walk the hound every morning and evening. In general, daytime walks should last at least 2-2.5 hours.

At the same time, it is important to regularly organize trips to nature, to the forest. A hunting dog, regardless of whether he participates in the hunt or not, needs to be outside the boundaries of settlements.

When walking in crowded places, next to motorways, you cannot let the hound off the leash. He may rush in pursuit of a stray cat, for example, or he may decide to catch up with a cyclist.

As a result, the dog can get hurt, hit by a car or simply get lost in a crowd of people.

A boring, sedentary lifestyle is not for the Estonian hound. It is vitally important for her to move, run. Slow walks will not give an opportunity to throw energy out of a super energetic pet.

A female Estonian Hound happily accompanies the owner during jogging, cycling. He has also proven herself as a participant and winner of frisbee, agility and other competitions.

Caring for an Estonian hound does not take much time and effort. The owner of such a dog should only do the following on time:

A balanced diet is a guarantee that an Estonian hound will develop correctly. In no case should you feed her with scraps from the master’s table.

It is recommended to focus on a natural way of feeding, the basis of which is lean meat and offal. Porridge, vegetables, dairy products, eggs are important for the animal’s body.

Necessarily with a natural way of feeding the dog requires vitamin and mineral supplements. Which ones, the veterinarian will advise.

Dry, prepared food is also not prohibited. The main thing is to buy it from reliable sellers. It must be of the highest quality.

Remember, your pet should have fresh, cool water in the bowl around the clock.

The keen mind and ingenuity of the Estonian hound makes it easy to train. But because of these same qualities, the educational process will be complicated if only the owner shows weakness.

A smart dog will instantly use it to its advantage and will try to lead a person on its own, eventually becoming uncontrollable.

Regardless of whether an Estonian hound goes hunting or is an ordinary pet, he must undergo a general training course.

After completing the specified course, the dog will obey unquestioningly and carry out the simplest commands.

Other teaching directions will follow the OKD. Hunting dogs will need special training. It is important from puppyhood to regularly take out the future four-legged hunter to nature, preferably to the area where hunting will take place in the future.

Purebred Estonian hounds in puppyhood have a dark nose or small pink specks. If the nose is light or the specks are too large, it is not recommended to buy a puppy.

During the hunt, the sound of the horn replaces the command “Come to me”.

Among all types of hunting dogs, the Estonian hound is rightfully considered one of the smartest.

With proper training, the Estonian hound is already at the age of six months able to participate with the owner in the hunt.

The Estonian Hound is an extremely active dog with an inexhaustible supply of energy. That is why he needs the same active, energetic owner.

The dog happily accompanies the owner not only during morning runs, but also on long-distance hikes.

If you cannot devote enough time to your pet, do not get an Estonian Hound puppy.

Before buying such a dog, check out its main advantages and disadvantages. This information will help you make the right decision.