Hallee's family surprises her with the adoption of the dog she was caring for at the shelter. He can't hold back his tears. 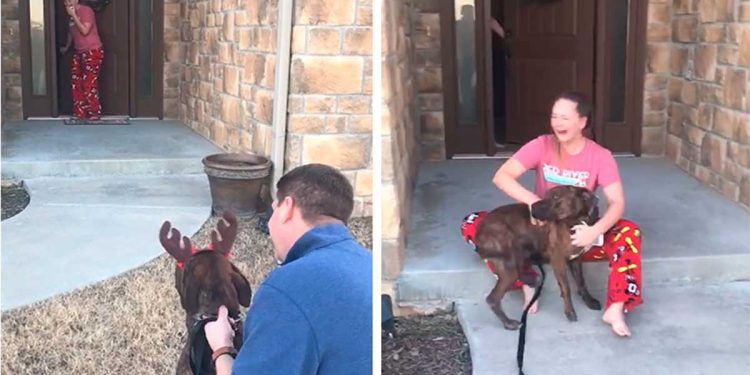 Hallee Fuqua, a young student from Oklahoma, USA, had been asking her parents for years to adopt a dog. But the answer was always “NO”. So Hallee started volunteering at an animal shelter to get her much-needed dose of canine love.

But she didn’t expect to fall so quickly with one of the shelter dogs, 2-year-old Rambo.

“Hallee frequently sent us pictures of her and Rambo at the shelter. After a while, my wife, Jessica, said, ‘I know this sounds crazy, but I think Rambo is part of our family.””

So Lance called the shelter in November to say they were planning to adopt Rambo and surprise Hallee for Christmas. Employees of the Humane Society of Stillwater agreed to help.

On Dec. 14, Hallee was “heartbroken” when she learned that Rambo had been adopted, even though she didn’t know who her beloved dog’s new family was.

“It’s one of those things where you’re glad he has a home, but sad you have to let him go.”

But soon his sadness turned to joy when very early on Sunday, December 16, Lance surprised his daughter with Rambo at home. The young woman’s father was convinced that he wanted to capture the emotional moment and his daughter’s reaction on video.

Check out his reaction in the video below:

“I think her mom and I cried like everyone who saw the video, we were right behind the camera. We see Hallee’s big heart and beautiful soul every day, now the world can see it!”

The video quickly went viral on Facebook and has already been viewed over 668,000 times.

In the video we can see Rambo with a reindeer antler headband and also Hallee surprised and crying with happiness when she sees Rambo with her father.

Rambo has been with the family for less than a week, but Lance says he’s adjusting pretty quickly.

“It’s been great! He’s been the center of attention for sure! He’s just a great dog and he’s a perfect fit for us!”