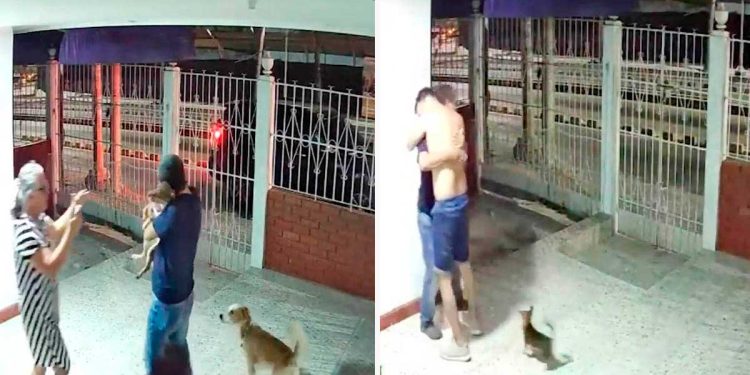 This family in Colombia can’t believe their lost dog made it home alone after several days away.

Recently on the Internet a moving video has been circulating, in which we observe that a small dog returns by his own means to his home, after being lost for a few days. His family was looking for him and when they saw him coming home, their happiness was indescribable.

The return of Brownie, as the dog is called, to his home in Barranquilla, Colombia, after a week of searching and concern from his family, was recorded in a video and quickly went viral on social media. .

Steven Beltrán, one of the dog’s parents, told EL HERALDO:

He arrived alone, we thought of everything, except that he was going to arrive alone.

The family can’t believe their lost dog is back

Steven says Brownie was lost due to an oversight by the family as they entered the house. They forgot to close the gate to the house, and the dog took advantage of his humans’ distraction and left the house to walk with the other two-family dogs.

We came back from a trip, we were in Cartagena and we arrived, we put the car in the garage and because of fatigue we forgot to lock the door. (…) We left them on the terrace. An hour later, a boy walks by with another dog and they (the dogs) have a bad habit of barking at everyone who passes, they lean on the gate and open it.

Shortly after, discovering that his dogs were nowhere in the house, he and his relatives went out to find them and managed to catch ‘Ralphy’ and ‘Filippo’. However, ‘Brownie’ was nowhere to be found.

Since his disappearance, the family feared the worst, for a week they relentlessly searched for their pup every night until the wee hours of the morning.

We felt a void and anxiety because we sincerely think about the worst, for example: how he will be, if he will eat well, if he will drink water, if someone will mistreat him. , if he got run over by a car, which was the worst thing you could imagine. It was a very ugly thing honestly.

Surprisingly, a few nights ago, as Steven and his family were about to look for Brownie again, the little boy appeared and walked through the gate of the house.

For me, it was magical. It appears out of nowhere. It was screaming, we jumped, we cried, my father seems to have won the lottery.

The woman says she and her family thought someone had left Brownie in the driveway of the house, but upon checking the security cameras they were surprised to see that was not the case.

Apparently Brownie was able to find her way home and came back on her own after a few days of adventures. Of course, after spending several days on the streets, his adventures took their toll.

He arrived skinny, for what he left, he arrived quite skinny, he arrived limping on one leg, he had peelings on his lower legs, he had blisters on his private parts.

Brownie was taken to the vet, who confirmed the little boy was in good health.