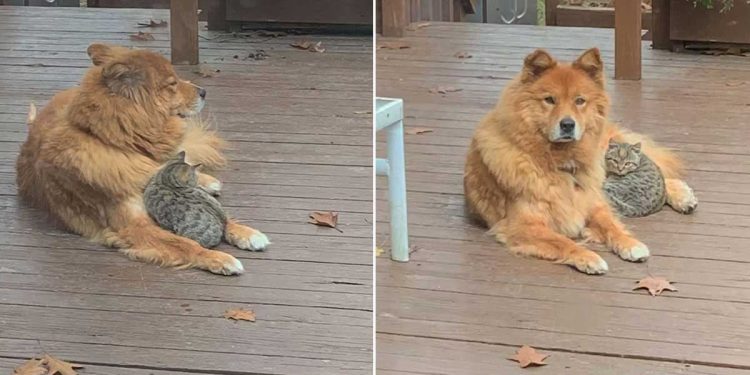 Bailey is a dog who has always been known for his sweet nature and who knows that offering love to others is its own reward. Every day she is tasked with showing her family how loving she is, and even though she was rescued from a difficult life, she is ready to give lots of love.

When she was just two years old, Bailey was rescued by Arthur and his family in 2007 as the dog was being used for breeding. It is possible that the female dog gave birth to many litters of puppies, but she was always forced to part with them, because she was in a kennel.

But today, at the age of 17, the gentle dog showed that he still has a mother’s love in his heart and can still shine through his loyalty.

A dog takes care of a homeless cat

It all started when Bailey and her family moved into a new country house a few months ago to start a new life.

Shortly after moving in, Bailey’s family noticed a small feral cat living in the back of the house. They decided to leave him some food, but they never saw the kitten walking around the garden again.

However, they were still eager to find out what had happened to the feline, and it seemed that Bailey was also keeping watch in the backyard.

Bailey was hanging out in the garden to see how everything was going.

His behavior was odd, as his visits to the patio were constant and long, so his family decided to look out the window to find out what was going on.

When they looked, Bailey was curled up on the porch, but she wasn’t alone, beside her was the feral kitten. Everything seems to indicate that the kitten was Bailey’s new friend and that he felt safe in the company of his new “adoptive mother”.

Bailey had never befriended a wild animal before. It shows how caring she is. She was always extremely sweet.

Noticing that the dog had gained the kitten’s trust, they decided to follow his example and welcomed him into their hearts. The family named the kitten Kitten-Kitten, and they didn’t hesitate to make him a new member of the household, to give him all the attention he needed.

Kitten-Kitten, now she lives inside with everyone. He follows Bailey around like a puppy. You could tell she’s part of the family now!

Perhaps, for the first time in her life, Bailey would not only be an adoptive mother, but finally one for the rest of her life.

Bailey would finally achieve her dream of being a mother at 17, and apparently her love for the feral kitten proved to be a lifesaver. Due to the approaching strong winter, the kitten was unlikely to survive, fortunately Bailey appeared in her life.

Thanks to Bailey’s adorable act of kindness, Kitten-Kitten can now have a second chance at life.