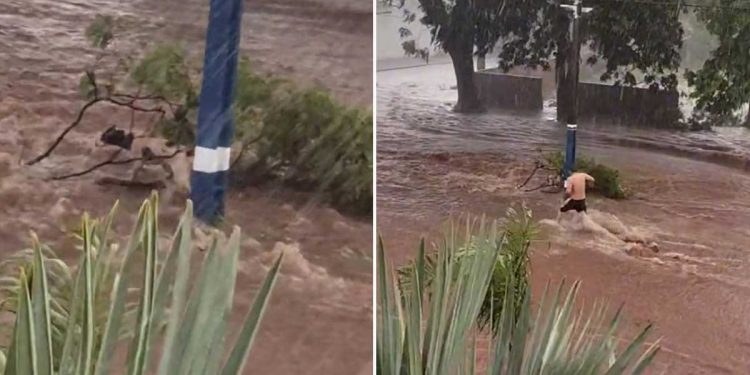 A family in Brazil rescues a dog that was in dire need of help because he was stuck in the middle of a flood.

About a month ago, a family rescued a homeless dog that had been trapped in the middle of a flooded street due to heavy rain in a city in Brazil. The dog was caught in an electric pole full of branches.

Apparently, the current from the flooded streets took him there and, to avoid being dragged, the pup clung to the fallen branches. At that time, a couple who lived across the street saw the puppy and did not hesitate to go and help him.

The man approached the pup caught in the current, and after taking him in his arms, he carried him and took him to his house to protect him from the cold and offer him a safe haven.

Once home, the little dog seemed to be very scared, moreover he was soaked and shivering with cold, but he would soon receive good care. They gave him a bath in hot soapy water, then dried him well and provided him with a food bowl and toys.

The pup was happy to get help, so they named him “Sorriso Trovão da Silva” as he continued to smile at his rescuers.

The couple decided to share the video of the heartbreaking rescue scene on TikTok, and it quickly went viral thanks to their compassion.

The description of the video says:

Compassion towards animals is one of the noblest virtues of human nature.

People were quick to comment on the video and thank the couple for saving this adorable homeless dog.

To everyone’s surprise, the video received over a million views and over 300,000 likes, in addition to nearly 12,000 comments. Seeing the scope of the video, the couple decided to share another showing the dog’s progress after being rescued.

As expected, people around the world also saw this video and were moved when they learned that the couple were going to adopt the pup.

Although Sorriso appears to be an adult dog, he is adjusting well to his new home and showing how happy he is with his family. And the best thing is that he always smiles, no matter what he does, he always smiles, showing that he is very grateful.

Thanks to the caring attitude of the couple, Sorriso had the opportunity to change his life forever and find a home.

If you want to know more about the dog, you can follow him through his TikTok account.