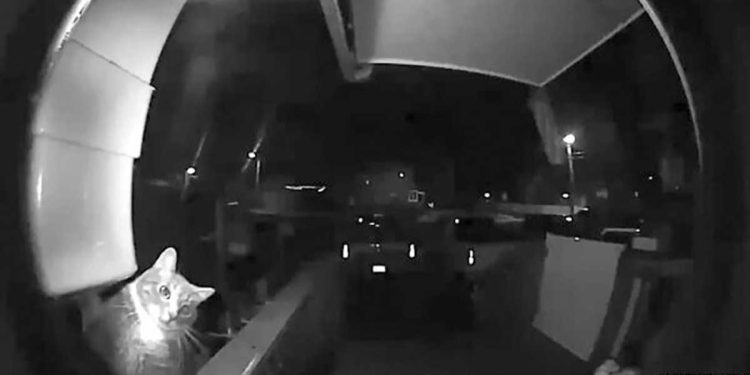 A curious and charming cat surprises his family late at night when he rings the doorbell to enter their home.

Winston is an adorable cat who lives with his family in Sitka, Alaska. The mischievous kitty likes to wander around its neighborhood at night. But one day, as he finished his tour and thought it was time to go home, he realized that everything was closed, so he rang the bell late at night, worrying the family.

Jamie Dunn, Winston’s mother, works as a paramedic, and she remembers being really shocked to hear his doorbell ring so late at night.

Looking through the peephole in the door, Winston waited to enter. Everything was captured by the security camera and Jamie shared the curious scene on Facebook.

The family is surprised by the doorbell late at night

Winston is about 2 years old. We were ready to welcome him and he ended up staying in the family. He acts like a teenager, constantly in and out of the house, and just likes to be picked up and petted on his own terms.

It’s really surprising to see the cunning of Winston, who is a very curious and of course very intelligent feline.

He goes in and out of the house while I answer calls day and night for the ambulance.

The 27-second video shows Winston looking around curiously as he waits outside the wooden railings for someone to open his front door. Jamie was definitely surprised to see that it was her cat knocking on the door.

Winston had learned to ring the doorbell instead of using a cat flap.

As soon as Jamie posted the video to Facebook user group Ring Doorbell, the hilarious comments from people online were immediate.

My cat has learned to ring the doorbell when he wants to come into the house.