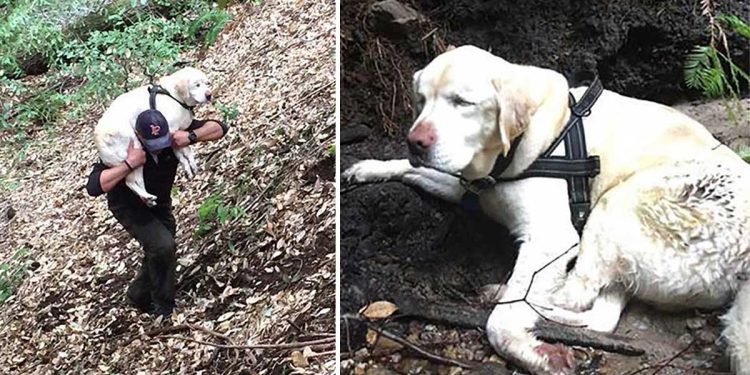 A firefighter who was walking in the woods rescues an elderly blind dog who had gotten lost.

A firefighter who rescued a blind dog lost in the woods has become a local hero to the lost animal’s family and to all of his neighbors in San Lorenzo Valley, California. Dan Estrada had gone for a walk with a friend in the woods behind his house taking advantage of the fact that he was off duty, but he never thought he would end up saving a dog.

The man just wanted to go for a walk with the intention of spending some time with his friend so he packed up and set off with his two dogs, they headed to a stream and got a surprise.

On one side of the creek was Sage, a 12-year-old Labrador retriever, who was also completely blind and not moving. Sage had disappeared from her home eight days ago, and her family had searched everywhere for her, but to no avail.

According to Sage’s family, one night they managed to sleep normally, but the next morning their beloved dog was gone. It’s a mystery, but the truth is that her family started looking for her asking for help from all her neighbors and relatives.

They even hired a professional dog tracker, put up hundreds of billboards around the neighborhood, and posted his picture on different social media.

After several days of searching with no good results, the worst was expected due to his condition and because there were cougars roaming around.

Our neighbors and other community members helped us search day and night for a week.

Fortunately, Dan and his fellow hikers were able to find Sage in time, lying by the creek, waiting for someone to save her. When Sage heard the people nearby, she looked up and Dan could see her. He immediately ran over and kissed her.

When we saw she was alive, I jumped into the stream and hugged her. It was truly a miracle.

The man knew Sage well, as she lives near her owners’ house and constantly plays with her two dogs. After being lost for a week in the woods, Sage was tired and weak, so Dan carried her up the hill on his shoulders.

Dan’s wife contacted Sage’s family, who immediately picked her up and took her to a veterinary clinic. Miraculously, after a series of tests and a thorough medical examination, the vet declared the dog to be in good health.

His family was happy, as many days of uncertainty passed without knowing what had happened to Sage, luckily he was already safe.

The whole community came together to celebrate Sage’s return, even a neighbor made him a steak and they threw him a welcome party. Sage’s family was so grateful they offered Dan an award, but the man suggested they donate it to an animal foundation.

The story of the rescue in motion traveled the world and Dan received thousands of messages from people moved by what happened.

More importantly, Sage was able to return home and will be able to continue enjoying her days with her family.