A mischievous husky apparently climbed out of an upstairs window of his home, but didn't know how to get back in until a firefighter came to rescue him. 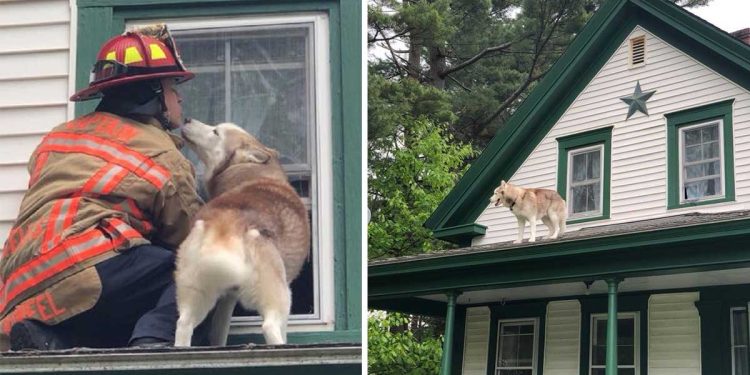 In moments of shock and terror, humans can forget to do the simplest and smallest things, like thanking the person who just saved their life, but animals? They also have perfect manners, and a good example of that is the video of a dog kissing the firefighter who saved him.

One day, the husky had been trapped on the roof of his house until a firefighter came to his rescue. The unfortunate little dog was caught on camera by Wells Police, a police station in the state of Maine, US, when he apparently got out of an upstairs window, but he couldn’t find a way back in .

The Maine police station had already received several calls from concerned residents, but they had to go to the Wells Maine Fire Department to rescue the curious dog, which he was surely having a terrible day. However, Fire Captain Jeff Nawfel grabbed a ladder and climbed up to save the helpless animal.

The dog wasn’t quite ready to head home, however, as he made one last lap of the roof, watching his adoring audience as the firefighter knelt by the sash window to open it.

Then the friendly husky approaches the firefighter to give him a hug, before snuggling up to him, presumably to thank him for being rescued. But sadly, firefighters don’t have time to cuddle when they’re on duty (saving lives, etc.), so he just petted him and carried him home.” Thanks to everyone who called and helped save him,” Wells Police Station wrote on its Facebook page. Captain Jeff Nawfel, for his part, told Inside Edition, “The dog was pacing on the porch ledge. He didn’t seem very distressed.” Then he concluded: “It was the first time in my career.”

Here is the video of the rescue: