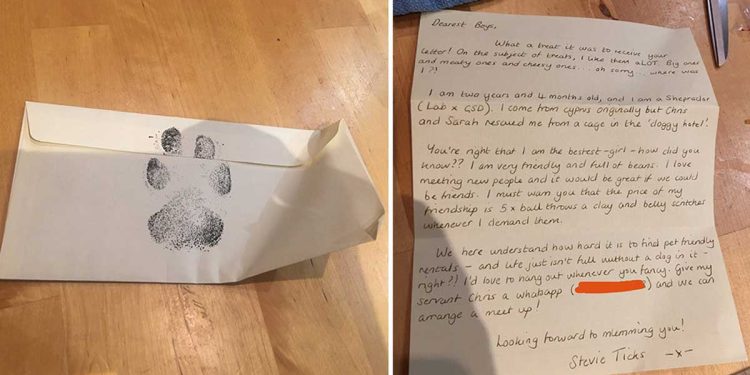 Four friends write a moving letter to their neighbor, in order to walk his dog. What they did not expect was the response they received.

Jack McCrossan and his three companions decide to move to the English city of Bristol. When they arrived home, they were quite discouraged to discover one thing: one of the conditions of the owner of the house was not to have pets.

This group of friends had something in common, they had all been lucky enough to grow up next to a dog, so they knew they would miss the company of a four-legged friend.

It was then that one night, they saw a dog staring at them from the window of the neighboring house, and they had the good idea to write a moving letter to their neighbor.

We are 4 engineers who moved to this area 3 or 4 months ago. In our house we live an Englishman, two Scotsmen and a Welshman. We are diverse.

The other day we came home from work and found our 4-legged friend staring at us through the window. He or she seemed very well @ classy. If you ever need someone to take you for a walk, we will be happy to do so. If he gets bored one day (we know he isn’t, but we can dream), we will be happy to take care of him. If you ever want to come home and bring the dog to brighten our day, you are more than welcome. If you wish to walk past our balcony windows so that we can see you, please do so.

We hope that’s not too much to ask, but our landlord doesn’t allow us to have pets and we all grew up with animals. Adult life is more difficult without one.

We look forward to your response. Or not.

In the letter they tried to explain the reasons why they had taken the decision to write it, so that it did not generate any fear, which they did not imagine was what would happen next.

Pleasantly surprised, they soon received a response through a letter addressed to “The Boys” and stamped with a paw on the envelope. This letter was written by owner Sarah Tolman on behalf of her dog Stivie Ticks.

It was a treat to receive your letter, and by the way, I really like sweets. The big ones with meat and the ones with cheese… oh, sorry, where was I going?

I’m 2 years and 4 months old and I’m a mix of Labrador and German Shepherd. I’m originally from Cyprus but Chris and Sarah saved me from a hotel dog crate.

They’re right, I’m a very good girl, how did they know? I am very friendly. I love meeting new people and it would be great to be friends. I must warn you that the price of my friendship is throwing the ball at me 5 times a day and scratching my belly whenever he asks.

We understand how difficult it is to find a pet-friendly rental, and life isn’t full without a dog, is it? I would love to meet you whenever you feel like it. WhatsApp my servant Chris and we can make an appointment.

I can’t wait to lick them! Stevie Ticks”.

McCrossan was so surprised and excited that he decided to share what happened on Twitter, generating a lot of reactions among the general public, which quickly went viral.

Been saying we’d love a dog about the house but our landlord doesn’t allow pets, so my housemate posted a letter to our neighbours asking if we could walk their dog every once and a while and the response was better than we could have ever hoped for pic.twitter.com/dcMOfPk5UH

Surprised is an understatement, honestly it was very surreal to see how popular the post has been and the thousands of positive responses from everyone!

Being such a popular fact, it wasn’t until Sunday, December 15, that the ‘Boys of 23’ finally met little two-year-old Stivie, known to have been adopted by Sarah and her partner, Chris, since shelter. In Cyprus.

Meeting Stevie was great! She was definitely as energetic as described. We have to take her for a walk and she won’t stop running!

Stevie spent an hour with the boys playing at their house. We could hear her thundering through the walls, and she had a great time, because when they dropped her off, she was moaning at the door and window for hours.

According to Sarah, this situation arose because she was forced to respond to the letter the boys had written, as she felt moved by their efforts to want to communicate with their neighbor for this reason.

At a time when people don’t really know or talk to their neighbors, it was really good for them to break that barrier.

From now on, she plans to make various invitations to the “boys of 23” and thus be able to share pleasant moments with everyone, at Stivie’s.

Thanks to this story, the “boys of 23” organize a WhatsApp group or a group chat, where they offer their services as companions for the dogs or as needed.

For his part, Stevie has established himself on his Instagram account, since there are more and more supporters of this character, he already has more than 68 thousand followers.