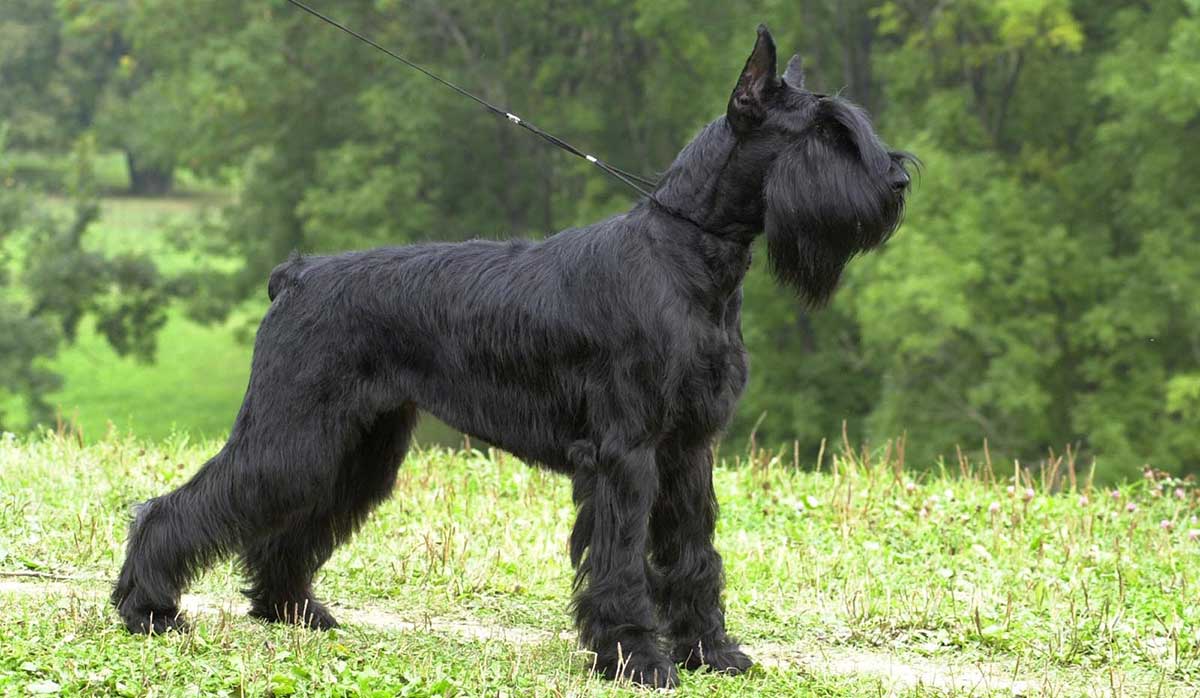 The Giant Schnauzer is a large, powerful, elegant and compact dog with bushy eyebrows, whiskers and a beard. This breed has a hard, stiff outer layer and a dense, soft undercoat. Ideally, the height of the dog is the same as the length, which gives a rather square impression.

Because of its kinship with the schnauzer and its past of sheepdog, the giant schnauzer is a large robust and strong dog, which is used both for surveillance and protection, as well as breeding, although in the latter aspect, it is less and less used. Being so tall, he needs a healthy dose of daily exercise, so it’s not recommended for people who don’t have time for long walks or playing with him. But it is not because of its size that it is an independent dog, but it is a very intelligent, active and loyal dog breed which, with proper training and exercise, is able to develop many skills. .

In this ‘ Pets Feed ‘ article, we will share with you all the information you need if you are considering adopting a giant schnauzer.

Characteristics of the giant schnauzer

The general appearance of the giant schnauzer is exactly the same as that of the schnauzer, but in a much larger size. It is a large, strong and robust dog, with a height at the withers approximately equal to its body length. The back is short and solid, and it descends slightly from the cross to the posterior region of the dog. The loin is short and the rump slightly rounded. The chest is moderately large and deep, reaching the elbows. The flanks are gathered in the belly, but without excess.

The head of the giant schnauzer is very characteristic and has bushy eyebrows. It is strong and elongated, and has an approximate length of half the body, measured from the withers to the base of the tail. The forehead is flat and the occiput is not very marked. The stop, or nasofrontal depression, is well marked under the eyebrows.

The muzzle is straight and truncated in the form of a wedge. He is covered in bushy fur which forms mustaches and a beard. The lips are black and well attached. The bite must be in scissors. The eyes of this dog are oval, medium and dark. They have a living expression. The ears, meanwhile, are high insertion and “V” shaped. Previously they were cut to meet the breed standard, but luckily today the standard requires them to be complete, so there is no need to mutilate the dogs. Either way, you can still see a giant schnauzer with amputated ears.

The tail should be shaped like a saber or sickle. Today, the FCI breed standard requires the tail to be natural. However, an amputated tail was previously required, and there are still many dogs of this breed with a severed tail. Fortunately, this practice is disappearing.

The coat of the giant schnauzer is composed of a thick fleece and a hard outer coat which is well attached to the body. The result is a hard, wired and thick overall layer. These hairs form a beard on the muzzle and very bushy eyebrows, characteristic of the breed. The accepted colors are pure black and “salt and pepper”.

Character of the giant Schnauzer

The giant schnauzer dog is of stable temperament, very intelligent, loyal, brave and active. It loves to play and enjoy outdoor physical activities in a big way. It is usually territorial and reserved, so it can become a combative and aggressive dog if not properly educated. These undesirable characteristics in a domestic dog can be channelled very well to make the giant Schnauzer one of the best guard and defense dogs.

On the other hand, when properly socialized as a puppy, this dog can get along with other dogs of its breed, with people and with other species of pets. However, it is not expected to be as sociable as a golden retriever or similar dog. When it lives in the right environment and is properly educated and socialized, the giant Schnauzer can become an exceptional pet. Its temperament allows it to be a great companion for dynamic people who enjoy physical activities, as well as families with big kids or teenagers. It is not usually the best pet for families with young children, because these dogs love difficult games and can become very clumsy with children.

This dog should not be alone for very long periods. Despite his independence, he often needs companionship. This dog is not suitable for living in apartments because its size and dynamism tend to cause problems.

With proper care, a Giant Schnauzer can live 12-15 years. Pet health depends a lot on the owner. The owner of the dog must undergo preventive examinations in a veterinary clinic on time, do routine vaccinations and treatment against parasites. You also need to know what diseases the pet is predisposed to. Giant Schnauzers most often have the following health problems:

You can keep the Giant Schnauzer both in the house and in the aviary. In this case, some nuances must be taken into account. For example, if the dog lives in the yard, then for the winter time it is necessary to provide it with a warm shelter, since the schnauzer’s wool cannot protect it from frost. When kept in an apartment, such a pet requires rather large daily physical activity.

In winter, it is recommended to use an exercise such as towing a skier, and the Giant Schnauzer will also be happy to pull a sled with a child, but his zeal must be controlled by an adult, otherwise the dog may speed up too much and the baby will fall out of his transport. It is worth noting that it is permissible to use a Giant Schnauzer as a tug from one and a half years of age, before that the dog’s muscles are not so strong and strong to perform such tasks.

At the moment when the puppy appears in the house, some preparations must be made. In an impassable, draft-free corner, determine a place for a dog with a bed, bowls for water and food, toys. Also, buy a leash with a collar, tools and grooming products in advance.

Taking care of the Giant Schnauzer is not difficult, the most time-consuming hair care, which involves the following procedures:

In addition to caring for the coat, it is necessary to inspect and clean your ears and teeth once a week. Wipe eyes, removing discharge. Claws are cut as they grow, although this is rarely necessary, usually these active dogs rub them off the road surface while walking.

This dog needs to do a lot of exercises. To make it happy, it is necessary to walk about three times a day and allow it to do a good amount of exercises. It also needs games and, if possible, with other dogs. Of course, it must play only with dogs with whom it gets along well. Canine sports such as freestyle and canine agility are very good for the giant schnauzer because it allows it to release energy in a controlled manner.

However, protective dog sports, such as schutzhund, tend to be better because they allow the giant schnauzer to meet its needs for rough play and develop a potential as a defense dog (although this is only an adorable animal).

The Giant Schnauzer is very active, so there must be natural meat in its diet. This does not mean at all that such a dog should not be fed with dry food. With the help of a specialist, a balanced diet is drawn up, as a result, the giant schnauzer dog eats meat products in a combination of dry feed. In this case, the meat should be of high quality, and dry food should be ideal for the specified breed.

Before starting to train a Giant Schnauzer, he should be taught to discipline, educated. The animal is smart, learns well, quickly, but shows willfulness. Therefore, you should start educating him as early as possible, since it will be difficult to catch up in the future. Before the lesson, it is useful to let the pet off the leash, give it a good play, run, so that later he concentrates on training.

During training, the schnauzer, as usual, will be cunning. The owner should not scold the dog, it is better to try to bypass the set traps – this will add credibility in the eyes of the pet. Otherwise, having passed the tricks through his fingers, the dog will cease to obey.

The dog must learn the following commands: “To me!”, “Near!”, “Sit!”, “Lie down!”, “Give!”, “Aport!”, “Place!” When the puppy has mastered the base, you can proceed to more commands, making sure that the pet is calm and balanced, without deviations in behavior, and lends itself well to training. When the base has been passed, the schnauzer can be taught circus tricks (somersaults, twisting in place, the command to lie on its back), overcoming barriers, and giving a paw.

Animals intended for the show should be socialized early in order to behave calmly and respond to the groomer’s touch. You can walk near busy places, on crowded streets, try to ride on public transport: this is how the natural caution of the Giant schnauzer will put on the limits of what is permitted.

The Giant Schnauzer as a pet is not suitable for everyone. The owner must be self-confident, he must know how to handle a large service dog with a tough temper and stubborn character. If you want to have such a dog, weigh your options. First, you should familiarize yourself with the pros and cons of the breed.

Origin of the giant schnauzer

The homeland of the Giant Schnauzers is Germany, to be precise, this breed originated from the Bavarian Highlands and Württemberg. Ignorant people, hearing the name “Russian Schnauzer”, are in complete confidence that the roots of the breed come from Russia. In fact, the Giant Schnauzer has nothing to do with this country, he is one hundred percent German.

With regards to ancestors, there are several versions:

The breed originated from the wire-haired dogs that were found in Europe and were used for hunting.

The formation of the breed took place in the nineteenth century. At that time, its representatives were assigned to the royal court.

In the distant past, schnauzer dogs were used in their homeland as accompanying caravans with pack animals and as guards for livestock. Since the eighteenth century, Giant Schnauzers have gained popularity as ideal guards for butcher shops and beer bars. Then they were waiting for the career of police and army dogs.