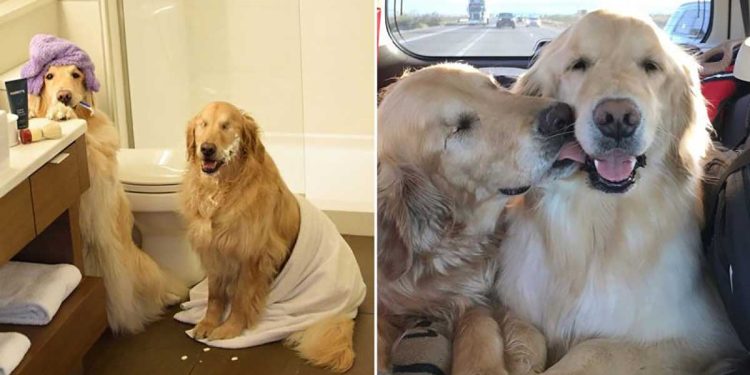 This sympathetic golden retriever, who has been blinded by a health problem, receives the best guide in the world, his best friend

The various problems that arise in life not only test our abilities, but also show us who our true friends are, so when Jake, a 2-year-old blind golden retriever, lost his sight completely, his best friend helped him.

Due to his physical limitations, Jake’s life would change drastically, but luckily Addie was willing to help him with anything. Since then, the gentle dog has not only been Jake’s best friend, but has become his guide and faithful companion for life.

Jake’s health problems began when he was two years old, his eyes suffered from a serious condition that prevented them from producing tears.

This Blind Golden Retriever Is Guided By His Friend

For several months, they used different medications recommended by an ophthalmologist and different surgeries, but their eyes continued to deteriorate over time.

Soon the vet made a rather painful decision, his family had to choose between Jake’s eyes or his dog’s life.

Both options seemed very cruel, especially for a dog who had already been through so much.

However, many families with blind dogs have decided to reach out to Jake’s family to tell them about their amazing experiences.

Additionally, they were told that dogs are incredibly adaptable and able to live normal lives despite being blind.

Our vet also told us that for a dog, sight is actually number 3 on his list of senses, as smell and hearing are more important to him.

With all the information they had gathered, Jake’s family opted for the option of taking his eyes out and giving him a second chance. After the operation the vet said Jake woke up and started wagging his tail, it looked like his days of pain were over.

Although she had to go through an adjustment period to get used to her new life, her sister Addie was always by her side to help her.

Soon, his steady progress was reflected in how well he overcame different obstacles and how easily he walked in different places. At first, Addie wore a bell around her neck for Jake to follow the sound, but then she learned to follow it on her own.

Now all it takes is for Addie to make a sound or just trace her scent, Jake already knows how to locate her. Since then, Addie has become a true guide for Jake, and for this reason she is called the best girl of all.

Jake still trips over some objects, but that doesn’t stop him from continuing on his way, but the best thing is that his playful nature is back.

We are happy to have made this decision and very grateful to the people who encouraged us to do so. Jake reminds us every day that his life still has great purpose and value, despite all its challenges.

Jake is characterized as having a fairly laid back personality, and when he’s not sightseeing or having fun with his sister, he has a normal puppy life.

The most important thing of all is that Addie is ready to continue to be his life partner and of course his faithful guide.

The moving story managed to move thousands of internet users, who soon expressed their happiness to see that Addie is still there for Jake.

Addie is a true example of a friend, because despite any problems or obstacles, she will never leave Jake.