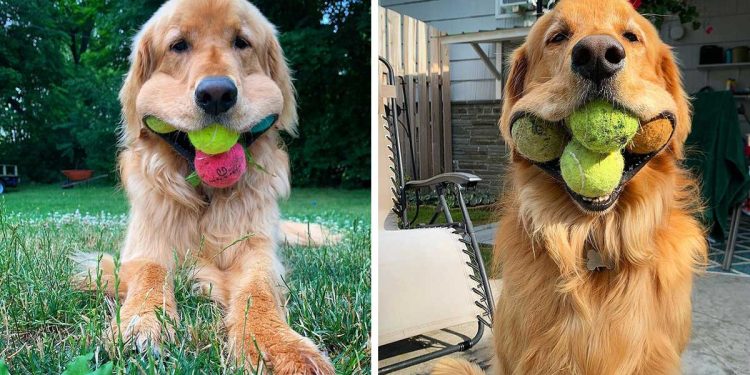 An adorable golden retriever stole everyone’s hearts in February when he set the world record for the most tennis balls in his mouth.

Well now Finley is back because his achievement has been recognized by the official Guinness World Records and he looks very proud.

Finley’s owner, Erin Molloy, explained that the handsome dog has been in love with tennis balls since he was just two years old and can now fit six in his mouth.

The six-year-old dog from Ontario County, New York managed to put six tennis balls in his mouth at once, beating the former Guinness World Record holder by five.

Erin’s owners, Cherie and Rob Molloy, recall a time when Finley ran towards them with four balls stuffed into his mouth and that’s when it became clear they had a special animal in the hands.

“The joy it brings us is an incredible thing,” Cherie Molloy told the Democrat and Chronicle. “But it also brings joy to people around the world.“

He added that the fun version of Finley is obviously going for the ball. While the first balls are easy to pick up, he slows down to grab the fifth and sixth ball.

But when no one is around to throw half a dozen tennis balls at him, he apparently likes to lie on his back and hold a ball above him with both paws, then drop it into his mouth.