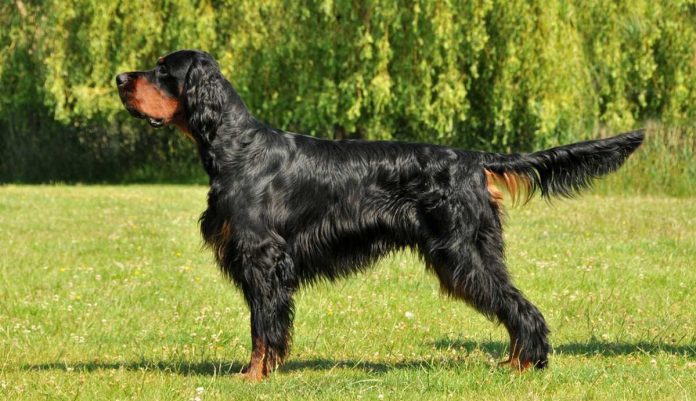 Most hunting dog breeds with exceptional working qualities unfortunately do not have a beautiful exterior. The Gordon Setter is living proof that there are exceptions to the rule. Representatives of this species are real beauties, aristocrats in the dog world and at the same time ideal hunters.

Besides the fact that the Gordon Setter is a dog with excellent hunting qualities, he can also be a loyal, quick-witted and friendly pet, a favorite of the whole family.

The homeland of the Gordon Setter is Great Britain.

The history of this breed began in the 18th century. Initially the setters were guarded by low- and middle-income Scottish hunters, the wealthy were not interested in them yet. Simple hunters were also engaged in the breeding of these dogs; they valued their pets for their stamina, hunting skills, and loyalty.

Duke Gordon played an important role in the popularity of the setter among the nobility. It was he who, for many years, took care of improving, raising the breed.

The ancestors of the modern Gordon Setter are the Old Black and Tan Spaniels, black pointers very popular in England and Scotland at this time.

The Gordon Setter is the result of many years of breeders’ work. In the process of forming the breed, crosses were made with Irish Setters, Pointers, Bloodhounds and Spaniels.

Gordon’s efficiency could not but rejoice. Such a dog is able to hunt all day in any place, in any weather, when it was impossible to notice that he was tired. Its task is to track game and indicate its location to the owner with a particular persistence of the smuggler.

Recently, the Gordon Setter has been used less and less as a hunting dog. More and more often representatives of the breed take part in exhibitions. Gordon’s breeding is largely done in the sense of exposure, while hunting abilities and instincts are greatly reduced.

Today he is not included in the list of “trendy” types of dogs.

Physical characteristics of the Gordon Setter

The Gordon Setter has a sturdy construction. Initially, representatives of the breed were heavier, but after crossing with the Irish Setter two species were formed: light and heavy.

Dimorphism in this breed is strongly expressed – bitches are significantly inferior to males in size, weight, their physique is more graceful.

The neck is powerful, a rather large head rest on it. The ears are long, drooping.

The nose is large and black. Jaws strong, scissor bite.

All parts of the body are distinguished by developed muscles. The chest is not too deep, wide. The back is straight, of medium length. The tail is straight, the shape of the saber is also not considered a defect. Gordon never lifts him over the back line. There is a long woolen dewlap on the lower part.

The limbs are strong, straight, not too long.

The coat is of medium length. The guard hair is straight, a slight waving is allowed according to the standard. Long and beautiful feathers are seen on the belly, chest and legs.

The color is black with red light. The tan lines are located on the limbs, on the throat, under the tail, on the mouth and on the chest.

White markings are allowed on the chest.

The brown tint of the coat and the large white markings are faults.

If you expect your dog to be overly playful and emotional, the Gordon Setter won’t live up to your expectations. Gordon is an energetic dog, but serious, reserved and balanced.

Its character is similar to that of the English and Irish Setter. However, it should be noted the differences between these species. The Scotsman is much more balanced than his relatives. He is also more stubborn, stubborn than the Irish setter.

Main character traits: loyalty, friendliness, restraint. A high Gordon can become a loyal friend, a companion during mushroom hunting, cycling, nature trips, walks in the park. If the owner wants to rest quietly, the Scotsman will not bother him, but will brighten up his loneliness.

If you like to hunt, the setter will become an indispensable assistant. For you, it will easily find game, take up a position and, at your signal, scare it away. The efficiency and hunting instinct of such a dog is at the highest level.

The Scotsman has a strong attachment to the owner. To his attention, he is ready to clash with other pets, although such conflicts rarely turn into fights. You can’t leave a fixer alone for a long time. From a long separation from the owners, he can become depressed and even sick.

He treats strangers with caution, restraint. He does not like familiarity and does not allow freedoms from strangers. Although each dog is individual in its own way.

The average lifespan of the Gordon Setter is 12 to 13 years.

By nature, Gordon was in good health. To maintain it, the owner must bring the animal to the veterinary clinic annually for tests, an x-ray examination and a preventive examination.

It is important to vaccinate in time, to treat with drugs against parasites of the skin, especially in spring and summer. Don’t forget about deworming.

The Scottish Setter, like all hunters, is very active and energetic. He does not like to be lazy, for him training, jogging, long walks out of town are a joy.

You can keep such a dog both in the aviary and in the house. If you chose the first option, provide the Gordon with a spacious aviary with a warm stall. When freeing a pet to roam freely in the yard, do not leave it alone, such walks should take place under supervision. The point is, the ferryman is a fan of digging and jumping. He can easily jump over the fence and rush after a cat or bird.

When maintaining an apartment, the landlord is responsible for providing Gordon with an adequate level of physical activity. It is necessary to walk with such an active dog every day for at least an hour. You cannot go out with a setter for a walk without a leash. His hunting instinct can manifest itself in the wrong place. Ideal for walking – morning jogging, cycling, an outing out of town (forest, field, meadow …)

Keeping the Scotsman on a chain is strongly discouraged. He is very attached to the owners; it is vital for him to be close to the people.

When arranging a place for a setter, it does not matter whether it is an aviary or a bed in an apartment, observe the following rules:

It is important not only to equip a place for a pet in accordance with all the rules. It is also necessary to regularly perform the following procedures to maintain its beauty and health:

To avoid tangles, comb 1-2 times every 7 days. After heavy soiling or after a walk in nature, it is also recommended to comb the coat of the setter.

We bathe once or twice a year or in the event of heavy pollution. The point is, Gordon’s wool has the property of repelling dirt. Frequent bathing with detergents will compromise the protective properties of the coat.

Gordon’s hanging ears are susceptible to otitis media, infectious diseases, all due to the rapid build-up of sulfur. It follows that it is necessary to inspect and clean them 2-3 times a week using cotton swabs and a special agent recommended by a veterinarian.

We cut the claws as they grow, although in most cases the Scotsman himself brushes them on the road surface during walking and training.

It is recommended to feed the Gordon Setter high quality dry food. Thus, you will provide your dog with a balanced diet with the required amount of minerals and vitamins.

Another huge advantage in favor of this method is that the long ears of the setter will not get dirty in porridge or other natural foods.

If you decide to go the natural method, be prepared to wash, dry the animal’s ears, muzzle and clean the area where it eats after each feeding. Remember that the products must be fresh and of high quality. You will also need vitamins, mineral supplements, and a well-formulated diet.

Gordon is prone to obesity. Therefore, it is important to establish the portions, their quantity, their calorie content.

The sooner you start raising a Gordon Setter, the better the results will be. The training begins from the first day the puppy arrives at your home. The first team is “place”. The animal must immediately understand where it belongs, where it is going to sleep. Then there are simple commands: “not allowed”, “next to”, “to me”, etc.

When the first step is complete, you can move on to more difficult lessons. Gordon has above average intelligence. To master a command, he will need 15 to 20 repetitions.

But the process cannot be called easy, since representatives of the breed are often stubborn. It follows that the owner of the Gordon Setter must be patient and persevering.

Gordon has a fairly strong nervous system. But corporal punishment cannot be applied to him. The rewards and calm demeanor will do more than scream. Establish authority with the dog and there will be no problem.

Scottish setters, whose mission is to hunt, must receive special training. From the age of six months, these dogs should be taken to the forest, to the fields, so that they get used to the smells of nature and feel free.

The Gordon setter is named after Alexander Gordon, who worked to improve the breed.

Gordon grows 2-3 years old, it is only at this age that he becomes a serious dog, before that he has the habits of a puppy.

If the setter begins to bark persistently, it means that he is bored and demands a change of scenery from the owner.

The heat is destructive for the representatives of the breed. If, for example, you leave such a dog in a closed, warm car, even for a few minutes, he will suffer a lot or suffer from heat stroke.

The main character of the famous movie “White Bim Black Ear” is a Gordon Setter, although this role was played by a dog of the “English Setter” breed.

If you are a busy person who will not be able to spend a lot of time with your dog, then the Gordon Setter breed is not for you at all. Such a dog requires constant attention, he needs daily physical and mental stress.

Below is a list of the main pros and cons of Gordon: