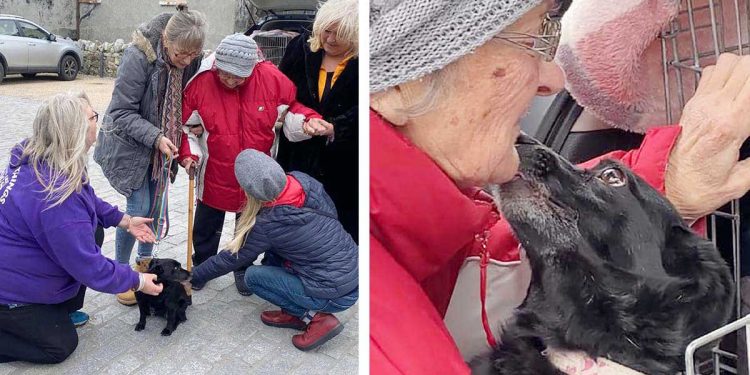 This grandmother finally finds her beloved dog after being separated while crossing borders to flee her country because of recent events.

Violetta, an 86-year-old Ukrainian refugee, fled Odessa with her family when heavy attacks and shelling began in her country. The older woman made an effort to bring her little dog named Tasha with her, but was forced to leave her in the care of a family in Romania because she was getting ‘weak’ and couldn’t take care of Tasha anymore for the moment.

Violette was afraid that she would never see her beloved dog again, as her family traveled and arrived in Ireland in early March, with the situation in her country and the difficulties of crossing borders, but these great friends recently met in a Very emotional moment in County Clare in the UK.

After hearing her story, Debbie Deegan, a Dubliner who had helped Violetta’s family get to Ireland, put in several hours of work to ensure they were reunited. The woman located the Romanian family caring for Tasha, and after a lot of paperwork, they managed to get her to England.

Debbie recalls that when she met Violetta at Dublin Airport, Grandma was always talking about her beloved Tasha.

The woman told the Irish Mirror:

The family had passed through Ukraine and Moldova. Violetta was quite stressed by it all and when they arrived in Romania they couldn’t take care of the dog, so they gave it to a Romanian family. It devastated her. She was heartbroken. She was her best friend, that’s what she told me when she met me.

With the help of Violetta’s granddaughter, they finally managed to track down the Romanian family that was caring for Tasha. After preparing the paperwork, a friend of Debbie’s, John D’Arcy, from Waterford, raised funds to fly Tasha to England.

After reading an article on a Ukrainian aid in the UK website, Lisa Kay contacted Debbie and offered to temporarily look after Tasha during her trip. From there, John traveled to Britain by ferry for the final leg of the mission.

Finally, and after a 12-day, 1,800+ mile journey across the borders of seven countries, Tasha and Violetta were reunited, and seeing them together was worth every effort for everyone who attended the reunion.

Grandma immediately started crying and to be honest we were all crying when it happened. It was very emotional.

Amid tears and emotion for the reunion, the grandmother said to her beloved canine companion as she enthusiastically licked her face:

Please forgive me for leaving you Tasha, I had no choice.