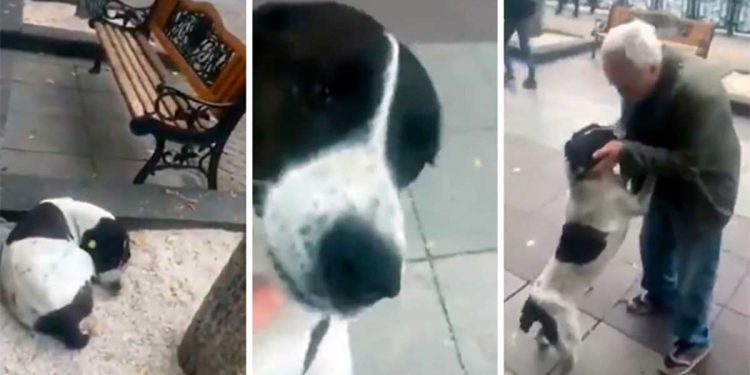 Moment of emotion when this grandfather finds his dog that he lost three years ago. It is very moving.

This grandfather had a tearful reunion with his lost dog after finding him on a street in Tbilisi, Georgia. The reunion between this duo of friends who have certainly not given up hope of seeing each other again one day is very moving.

The man sees a dog curled up on the sidewalk and, approaching, pronounces her name (Georgie). The dog looks up and after a few seconds pause recognizes his best friend he lost a long time ago.

Georgie cries and wags her tail excitedly as the two hug.

Someone shared part of the story of that moving reunion:

From what I understand of the story, the man lost his dog three years ago and received a phone call from a shop owner letting him know that a dog that looked a lot like his was was in front of his shop. How did he know that, I don’t know, probably from acquaintances.

Anyway, he’s made the trip, and as he walks up he’s in disbelief, commenting that he really does look like him…The way he calls him and the dog’s reaction speaks volumes of themselves.

It is a very moving moment. Watch the video of the moving reunion.

The man says in the video:

He looks a lot like him, see him? With a yellow ear tag. You can see it ? Right here. At the foot of the tree. Georgie? Georgie, it’s you! Aww nice boy, how are you boy?

The dog had a yellow ear tag, which means authorities thought he was a stray, so they vaccinated him, possibly neutered him, and then released him.

For many people, it would be hard to believe that after so long they would see their beloved pet again, but this couple never gave up hope of seeing each other again.