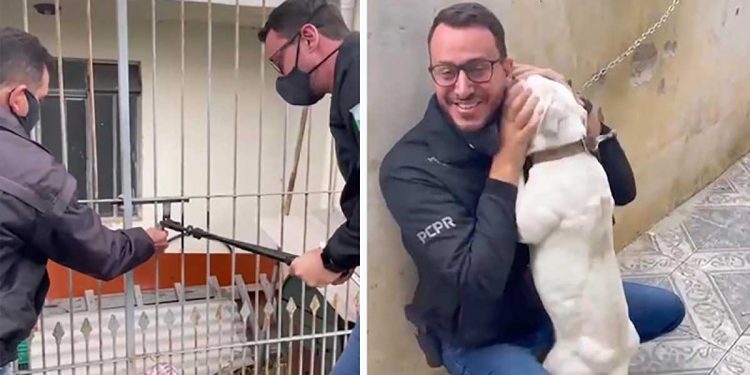 An adorable dog in chains in Brazil can’t stop jumping and happily hugging the man who finally freed her.

Matheus Laiola has dedicated himself to rescuing dogs living in difficult situations in Brazil; and fully enforce national animal protection laws. This man was not oblivious to the pain of pets who live most of their lives chained and exposed to the elements.

It is hard work, but it always brings with it a great reward. Matheus recently shared on his social media a case about some puppies who were living in chains, of course, before releasing them, the man made sure to have proof of the possible mistreatment the canines suffered.

Matheus recently rescued a dog who was living in a difficult situation, in the publication made on his Facebook account he writes:

She lived in chains, in the cold, the heat, the rain and the sun. We arrived at the scene and when no one was there, we broke the lock and saved the dog.

As soon as she felt safe, the adorable little dog was overwhelmed with happiness; she knew she was being given a second chance and she couldn’t help but kiss the man who had come to set her free.

According to Matheus, the person who was responsible for the dog has managed to be identified and will be investigated for animal abuse, in the meantime the adorable canine is safe and will finally have another chance at life.

After her release, the dog was entrusted to the organization and rescue center Casa Do Produtor, where, fortunately, she did not stay long.

Representatives of the organization told The Dodo:

She has already been adopted. She is fine.

If you want to know a bit more about the work Matheus does with dog rescues, you can visit his Facebook page where he constantly posts updates on his work.