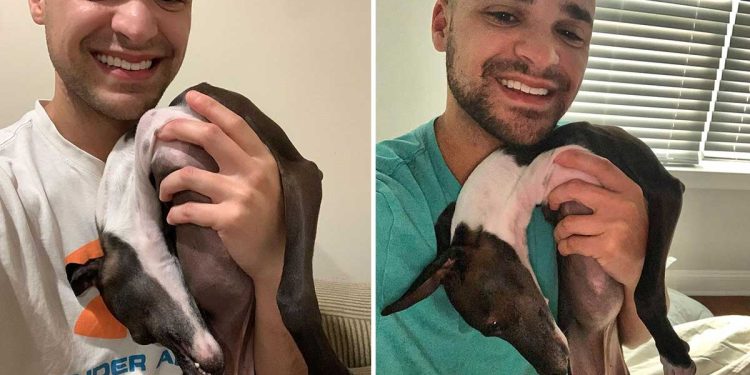 An Italian Greyhound melts like jelly every time his human dad tries to take a picture next to him.

Although it seems a little strange not everyone likes to take pictures, so some make a series of faces, cover the lens, move or pout to avoid being photographed, but some like Sparky go more far.

Sparky is an Italian Greyhound who doesn’t seem too happy when the camera spotlight shines on his face, and he lets it be known. Although his way of expressing it is a little curious, making the scene of a melted jelly is the best option to express his displeasure.

Every time Kennedy Simmons tries to pose with her dog for a photo, it seems her dog is using her strategy to avoid her.

An Italian Greyhound melts at the moment of the photo

Although transforming into a boneless dog to avoid photos and complete long photoshoots was a bit odd, it proved to be very effective.

When I take pictures with him, he has a certain tolerance, and when it’s over, he falls over, it’s almost like he’s having a fit. He gets limp, and every now and then he looks at me side and does it in a cruel way, as if to say: is it over?

But, although it seems that all the photos are spoiled by her attitude, it is quite the opposite, because they have become the delight of many followers on the Internet.

His funny attitude makes us forget all the physical difficulties he may have suffered and he continues his life as a normal dog.

Kennedy has worked as a veterinary assistant for many years, where he is renowned for welcoming dogs with special needs who come to the clinic.

This is how he adopted Sparky, after his previous family decided to entrust the little greyhound to the veterinary practice so that he could be better cared for.

They were a great family, but Sparky had to have surgery and they were really worried that they couldn’t take care of him after he broke his leg.

The only thing her family really wanted was a good home where they would give her all the attention and care she needed. Also, Sparky failed to recover properly from the surgery, so her leg had to be amputated, but that didn’t change her joy.

He’s been a rebel since day one. If you don’t have your eyes on Sparky, he’ll get in a lot of trouble.

More importantly, the dog was able to find him a suitable home, and although he weighs only 11 pounds, he is living his life to the fullest.

When it comes to other dogs, he is very friendly and quickly befriends them, but when he becomes confident he really enjoys teasing them.

He’s so mean to other dogs that he bites their tails and their ears. But all the dogs end up loving him and are very tolerant of him.

Despite her energy, Sparky only likes to pose for pictures, but leaves her owner’s phone full of hilarious images.

Sparky is a character who makes people happy, but above all he loves his father and he lets him know every time he comes home.

Kennedy doesn’t care if she can’t get a perfect shot, after all, your unconditional love is the spark she needs in her life.