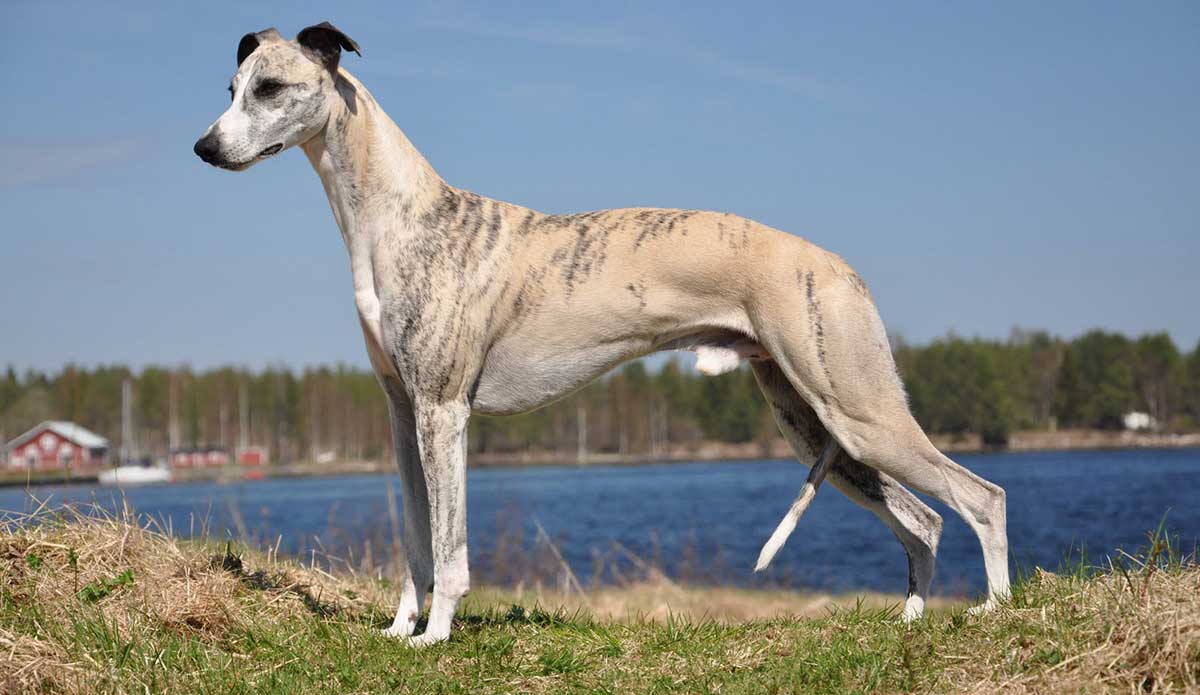 The greyhound is the fastest dog in the world, capable of speeds of up to 65 kilometers per hour. This makes it one of the fastest animals in the world, only being outnumbered by very few animals. For this reason, they are the greyhounds of preference for the so controversial dog races that are carried out today. This very fast dog is a magnificent example of artificial selection and of the extremes that man can reach in his search for perfection in the animals he breeds.

Among the wide variety of hunting dogs, it is worth highlighting the Greyhound breed. This is an ideal hunter and runner, capable of detecting and catching even a hare at a short distance. Not every dog can do such a task.

In addition to hunting talent, this dog possess the manners of a true aristocrat, fidelity and refinement. Such a pet is able to become a devoted companion and pet.

Physical characteristics of the Greyhound

In 1986, the Greyhound dog breed standard was recognized. Representatives of this type are divided into three classes regarding their use:

When breeding, it is forbidden to cross representatives of different classes.

The physique of the Greyhound is slim, but the musculature is extremely developed in all parts. The weight of adults is 26-40 kg., Height is about 68-76 cm. Males are more powerful than females.

On a long, muscular neck a head with a flat skull is held long. The ears are small, thin, slightly raised. The eyes are dark, the eyes are smart, inquisitive. The nose is big. Jaws are powerful, fangs are large, scissor bite.

The back is in the shape of a rectangle, it is quite wide. Ribs well defined. The abdomen is taut, like all greyhound dogs. The chest is deep. The tail is very long, low set. The legs are straight, long, flexible, with well-developed muscles, which allows us to judge the qualities of a born runner. Paws are not too big, pads are thick, strong, fingers are arched.

The coat is short. Despite the thin hair, the coat is quite thick, soft to the touch.

The color is very diverse: black, blue, white, mug, red, fawn, brindle, sand, brownish. A combination of white color with marks of any of the mentioned shades is allowed.

Character and temperament of the Greyhound

The main character traits of the greyhound are poise, high adaptability, contact and, surprisingly, laziness. This conclusion is explained by most owners of the Greyhound.

Representatives of the breed are famous for aristocratic manners, watching them you might think that they are too sluggish. Instead of walking, such a dog prefers to rest, sitting on its rug. Greyhounds that are considered more active, belong to the class of runners.

Homeworkers will never suffer from mood swings. The dog behaves calmly when he remains in the house. Not in his habit of spoiling furniture and other property of the owners. The Greyhound is not worried about a change of scenery, moving, a new place of residence. If only the owner is next to him.

The Greyhound is loyal to the owner, with the right upbringing, he is obedient, unquestioningly carries out all the commands. He is friendly with the rest of the family, shows special tenderness to children. At the same time, males are more restrained, but females are extremely affectionate with children.

Greyhound dogs can be called a sociable and contact dog. He likes to be in the company of people, not showing special aggression to strangers. It barks extremely rarely. It gets along hard with pets, since it’s a dog with a hunting instinct. Therefore, it is not recommended to keep cats, dogs of small breeds or other small representatives of the fauna in the same house as the English greyhound, because the greyhound can take them for prey and arrange a hunt with a sad outcome.

Greyhounds hunt by relying primarily on sight, as their sense of smell is less acute.

With proper care and care from the owner, the greyhound can live 12-15 years. Long-lived Greyhounds are those who celebrated their seventeenth birthday. The greyhound is a healthy dog by nature, but, like all other dog breeds, problems arise from time to time. In order to eliminate them in time, the owner of the greyhound should know what diseases the pet is predisposed to:

The healthy state of the dog largely depends on timely vaccination, treatment from external and internal parasites. It is also important to bring the pet to the veterinary clinic twice a year for x-ray and testing. A routine check will help you find health problems in time.

Greyhounds are sensitive to cold and damp. Thin, not reinforced with undercoat wool does not warm them in cold weather, and also poorly protects the skin from injury.

Despite the hunter’s instinct and excellent runner data, the greyhound feels comfortable in an apartment or in a private house. Surprisingly, the greyhound is quite difficult to climb, it can be difficult to bring it to the street. This does not mean that he does not need walks and physical activity.

Once a day, an greyhound should be able to run without a leash in open space. Such a promenade should last about an hour. To do this, the owner will have to find a place away from the tracks, not crowded. If you let go of the greyhound, for example, in a crowded park or near a city street, it may get caught in a car or harm other small animals, taking them for game.

In addition to a long walk, two more short ones (12-20 minutes) will be required. They are needed so that the dog fulfills its natural needs. During short-term walks, the dog can be kept on the leash.

In wet autumn or frosty winter weather, the greyhound freezes. Walks are shortened at this time. It is also necessary to buy dog ​​clothes. Warm cape, blanket greyhound is necessary when the thermometer shows a temperature below zero.

Caring for an greyhound is a snap. It should only be noted that the representatives of the breed, due to their aristocratic nature, allow only the owner to take care of them. If another person is involved in such procedures, the greyhound is offended, showing his displeasure with his whole appearance. Therefore, it is recommended that the owner personally carry out the following procedures:

The greyhound is very picky about food. He loves milk and soup, prefers canned, dry food. Such a pet eats natural food reluctantly, although the indicated feeding method for greyhound is preferable.

Disobedience, aggressiveness, stubbornness – this is not about Greyhound. That is why even an inexperienced owner can engage in training such a pet. Due to the high intelligence, the Greyhound is distinguished by his diligence, quickly remembers commands and understands in a word what is required of him.

If you decide to entrust training to a dog handler, be sure to attend and participate in this process. In no case should you lose touch with the dog, it must endlessly trust the owner and obey him. Raising an English greyhound, do not skimp on praise, exclude rudeness, physical punishment.

The course of the training is chosen based on the purpose of the Greyhound. For example, a companion dog or show dog will have to go through a general training course. If the Greyhound hunts for game, the owner should look this training specific course.

Not everyone can afford to buy a purebred English greyhound. It is not only a high cost, but also a person’s ability to maintain such a pet in appropriate conditions. To finally decide, check out the main pros and cons of the Greyhound breed.

In ancient times, the Greyhounds were called “crickhound”, which is translated from Old English as “grasshopper hound.” It is not surprising, because this dog has much in common with all known insects.

Regarding the origin of Greyhound, there are several versions:

In the tenth century, the popularity of the Greyhound dogs and their numbers were at the highest level. It is not surprising, because such dogs were kept in many peasant dwellings, helping commoners to get food in the form of forest game. The greyhound was also valued by the English nobility. Having a pack of purebred greyhounds was considered a sign of wealth.

In 1014, the Forest Law was issued, after which the Greyhound became too expensive for farmers to maintain. After all, the hunting dog no longer returned to the family of the poor. Moreover, these dogs were forbidden to keep the peasants. Therefore, the eleventh century brought the breed some decline in numbers. Gray greyhounds became the privilege of only representatives of high society.

During breeding, the formation of the breed special breeding work was not carried out. But some “injections” into the blood of the English greyhounds were made. For example, in the eighteenth century, a greyhound was crossed with an Old English bulldog. The goal was to improve, strengthen the skeleton.