The Groom Chooses His Dog As A Best Man 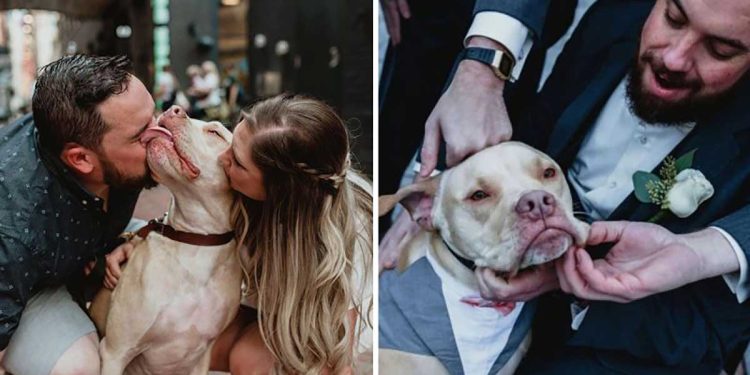 Groom picks his dog as groomsman, proving best friends are always in the moments that matter

The phrase ‘man’s best friend’ should be taken very seriously when talking about dogs, and at this wedding it was obvious that they were some of our most special moments.

Shane Hudson and his best friend Weller, a Staffordshire mastiff/bull terrier mix, proved to be best friends as they shared an unforgettable moment. Although it may seem unbelievable, the three-year-old dog became the best friend’s wedding witness, something that everyone in attendance fell in love with.

Shane and Amanda, who is now his wife, knew from the start that Weller needed to be involved in their marriage, but they didn’t know what his role would be.

Man chooses his dog as groomsman

At first, the couple thought about making him the ring bearer, but they came to the conclusion that he should be the better man.

Shane said, according to METRO:

Weller is our world. We adopted him as a puppy and he goes just about anywhere we can take him.

The couple have always been characterized as animal lovers, so their beloved dog is expected to have an important role in the marriage. So they started planning the wedding, and Weller’s training was very important because they had to find a way to keep him calm.

Although, truth be told, Weller never caused any major problems, since his behavior is exemplary and marriage would not be the exception.

We have worked very hard to coach Weller over the past year, and we always get praise for his good behavior.

Finally, the wedding day arrived, and Weller accompanied his parents dressed in a small tuxedo and looking like a star. He was with Shane and Amanda as they took their vows and celebrated their nuptials, not to mention he posed for all the pictures.

The wedding turned out to be such a success that Shane described it as “absolutely perfect” and Weller had a lot to do with it.

We have non-traditional tastes and are really focused on celebrating our love for each other.

The day ended as everyone expected, but no one could deny that the stylish Weller captured everyone’s attention and hearts.

Weller has always had her own small fan base, as her owners post videos and photos of her on different social media. Most important of all, however, was that he was able to be the perfect best man for his parents’ wedding.