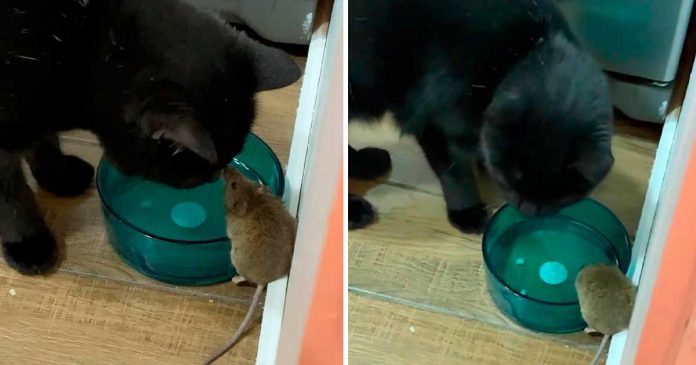 Benjamín Sagredo, Simón’s father, a charming kitten, repeatedly began to hear strange noises coming from his kitchen in the city of Punta Arenas, Chile. The sounds were faint, and only occasional, so Benjamin was not overly concerned with the situation.

But apparently, Simon was aware of everything and knew about the intruder that he had been making these strange sounds, and he decided that it was best to make him feel welcome at home.

We didn’t know what it was. We had seen Simon play with something under an armchair once, but we didn’t give it much thought.

Guy finds his cat making friends with the mouse

One morning when Benjamin was on his way to the kitchen, he came across a truly amazing scene. The man found a tiny mouse quietly drinking near his cat’s water bowl, and as if that weren’t enough, Simon didn’t seem surprised or uncomfortable by the rodent’s company, he seemed to be making friends with him.

Apparently, the cat with the great and noble heart had befriended the animal that was apparently born to hunt and have a fierce enmity.

They seemed very familiar. Simon was being affectionate. I decided to record it. I thought no one would believe me.

Simon’s father was completely taken aback, but seeing his cat’s friendly reaction to the mouse, Benjamin couldn’t help but adopt the same reaction from his feline. Without a doubt, Simon’s great gesture and compassion was contagious.

I felt it for the little mouse. He couldn’t dream of hurting her. I called him Chefcito.

Of course, after the emotional moment, the man picked up Chefcito and took him out of the house with care. But apparently, Chefcito did feel welcome in his home thanks to the feline and had no intention of leaving completely.

He has returned several times. We love that Simon accepts it. He is a very affectionate and sociable cat. If Chefcito keeps coming, we will have to adopt him.