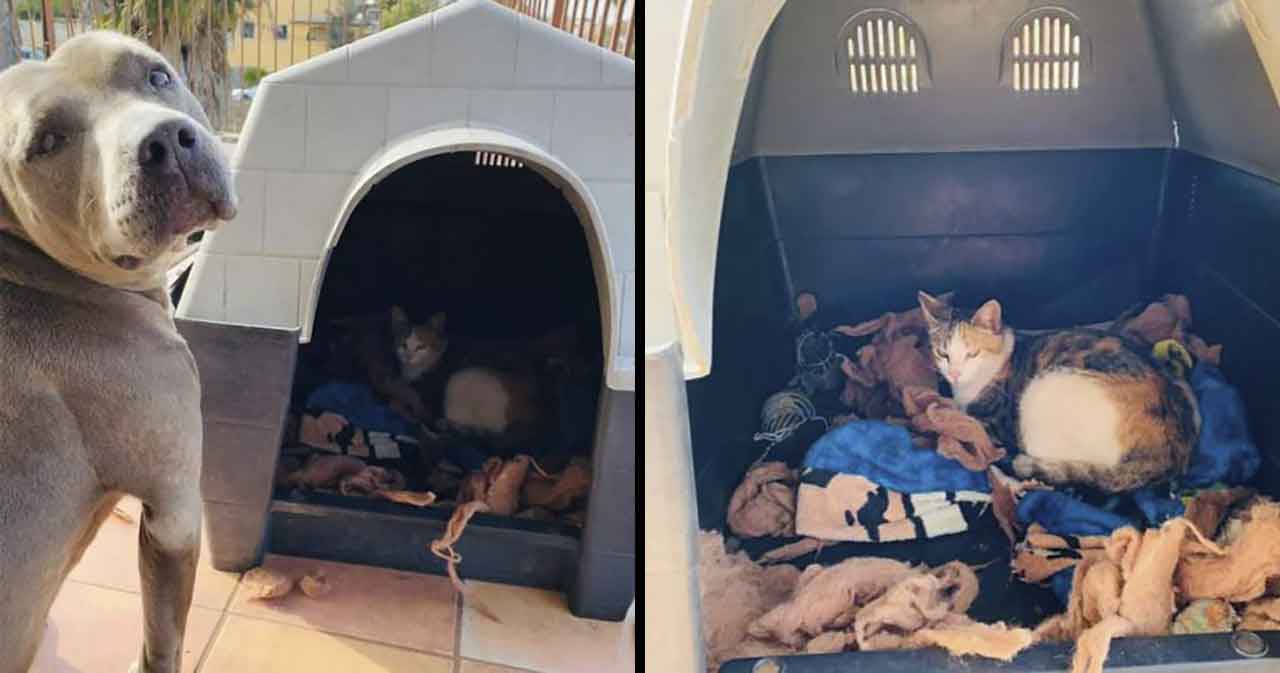 Hades is a friendly Pit bull dog who wanted to help and invited a pregnant homeless cat to her home to give birth to her babies.

Pit bull dogs are generally considered a dangerous breed, but this is due to their bad reputation. The same goes for the sweet dog named “Hades”, because people assume the worst about him, just by looking at his appearance.

Despite this, Hades recently showed that what really matters are the feelings he carries in his noble heart.

Hades is a huge and noble Pit Bull who lives in the city of Tijuana, Mexico, with Juan José P. Flores.

Noble pitbull welcomes a pregnant cat into his home

Since Juan José remembers, a homeless cat frequently visits his neighborhood, he has never been able to get close to her, on the contrary, he leaves her food.

It seems that this act of kindness did not go unnoticed by Hades, who quickly followed the example of Juan José, with his own gesture of love.

One day, Juan José was at home, when he suddenly heard knocks on the back door, where Hades often likes to hang out.

Juan José thought he was a neighbor, but in reality it was his friendly dog ​​who had something very important to share with his father.

The man said to the Dodo:

He was desperate and he made a lot of noise.

Going out to check, Juan José met Hades, who happily showed that he had invited a friend to stay in his niche.

It was the shy stray cat, which turned out to be pregnant and needed a safe place to deliver, and Hades knew it was the right place.

I was very surprised.

But the kindness of Hades did not stop there, when the cat went into labor, he stayed by his side to take care of her.

He dragged a blanket to the entrance of his niche and settled in front of the door. The cat felt protected by him.

Under the gentle supervision of the noble dog, the stray cat was able to give birth to two beautiful babies, who were born healthy and safe. She was very comfortable in the house offered to her and very happy with her babies.

Of course, Hades was happy to welcome them.

I think he felt he was a father.

The man decided to move the new mother and her babies to the main house, where he and Hades can closely monitor them.

Now, a beautiful friendship has started to flourish between Hades and the cat, who has been baptized “Nicol” and will be part of the family. Juan José says that they spend a large part of their time together, until Nicol is busy taking care of his beautiful kittens.

For the moment, Hades seems to be calm and easily rests knowing that his friend Nicol and the babies are close and safe.

When the time is right, Juan José will look for new families for the kittens, Nicol will always have a home with him and Hades.

Juan José hopes that the touching action of Hades will change the way people think about Pit bulls and look at his noble heart.

Pit bulls are good dogs. Hades put everything aside to help someone else. We must do the same without expecting anything in return.