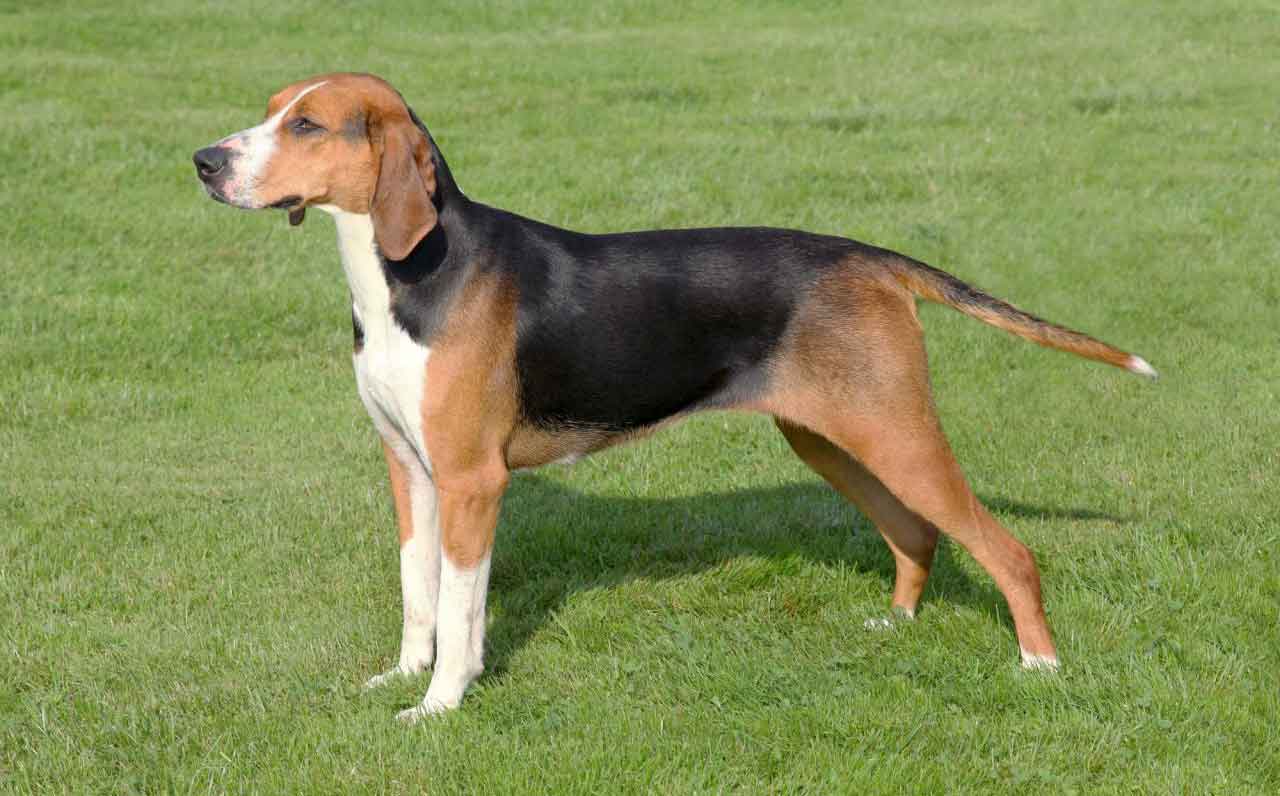 The Hamilton Hound (Hamiltonstovare) is a fairly large hunting dog breed that was bred at the end of the 19th century in Sweden. Hardy, hardworking with excellent eyesight and flair, specializes in fox and hare hunting. Today, the loyal and obedient Hamilton Hound is often brought in as a companion.

Everyone dreams of a dog as a loyal friend and companion who will never betray and will always be there. When choosing a dog, the choice is very difficult, and you don’t know who to choose. There are many dog breeds that suit people in all planes, one of the rarest and most sought-after dog breeds is the Hamilton Hound. What is this dog breed, and why is it so rare?

The history of the Hamiltonstovare dates back to the 16th century. With the advent of weapons and a new type of hunting fun, hunting dogs began to be imported into the country from England, France, Germany and other European countries. Until the end of the 18th century, hunting with hounds was the prerogative of the upper strata of the population. Many noble persons kept kennels and bred their own type of dogs. With the abolition of restrictions, they quickly spread throughout the country in the form of many hounds of excellent appearance and working qualities.

In the middle of the 19th century, Earl Adolph Patrick Hamilton, known for his love of dogs and hunting, began purposeful breeding work. His “ideal” hound had to meet a number of requirements: to be smart, independent in work, but at the same time obedient, unpretentious, hardy and friendly. Hamilton’s hound is believed to be a cross between various Swedish, South German, Foxhounds and Harriers. The breed was first exhibited in Sweden in 1886 under the name Swedish Hound. In 1921 it was renamed in honor of the author.

The Hamiltonstovare is a balanced, harmoniously built, stately dog ​​that gives the impression of strength and endurance, without being heavy. The coat is of medium length, tricolor. Moderately stretched body. Sexual dimorphism is pronounced.

The head is elongated. The skull is slightly convex. The stop is well marked. The muzzle is strong, almost rectangular, long. The bridge of the nose is straight. The lobe is black, well developed. The upper lip is thin, dry, rounded, slightly hanging over the lower lip. Jaws well developed, scissor bite. Eyes with a calm expression, dark brown in color. The ears are set high, drooping, reaching half the muzzle, soft, flat. The neck is strong and long.

The body is strong with a pronounced withers, an even, straight back and a well-developed deep chest. The loin is slightly arched. The croup is long, slightly sloping. The tail is straight or saber-shaped, reaching the hocks. Forelegs with strong bones and joints, harmonious, straight and parallel. The hindquarters are well-set, well-muscled and angulated. Feet are oval, tightly knit.

Character and temperament of the Hamiltonstovare – Hamilton Hound

The Hamiltonstovare has good character and is an affectionate companion as long as his hunting instinct is satisfied. It is a dog in love with the terrain, able to follow a path for several kilometers, so it is essential that we are sure that it will come back when we call it.

It is also very important to build a waterproof fence in the garden. It likes people and is calm, although it may be too busy for a home with very young children.

The Hamiltonstovare is a dog used mainly for hunting and, above all, specialized in hunting foxes and hares. Its activity consists in tracking down and hunting its prey and in alerting the hunter. Therefore, this requires a lot of exercise. It is a dog suitable for rural areas, and on the contrary, it does not adapt well to urban life.

Its hyperactivity and the need for support do not make it suitable for owners who live alone, preferring active families. This dog is determined to hunt, with a solid constitution, very resistant to the Scandinavian cold, unbearable and who love work

As a family, the Hamiltonstovare is gentle, stable, calm, reliable with children, obedient, easy to train and calm with other dogs. On the other hand, it can bark and destroy due to sadness, boredom or separation anxiety if it is left alone for a long time.

The average life expectancy of a Hamiltonstovare is between 10 and 13 years when properly cared for and fed with an appropriate diet of good quality suitable for its age.

Hamiltonstovare dogs are known to be healthy and they do not seem to be affected by the hereditary and congenital disorders which afflict many other pure breeds. However, the conditions known to affect the breed are as follows:

Note! Epilepsy is one of the most common diseases in the Hamiltonstovare. Of congenital diseases, congenital heart disease is most common. Therefore, if the dog’s condition begins to deteriorate, and the owner sees that something is wrong with him, then an urgent need to take to the veterinarian for a complete examination of the pet. But in general, if you properly look after and lead a healthy lifestyle, then Hamilton’s hound will not have problems.

The best option for a Hamiltonstovare would be keeping in the yard of a private house or in a spacious enclosure. The Hamilton Hound is not the best choice for an apartment. He values ​​freedom and needs good physical activity. The yard in which the dog lives must be well fenced.

The Hamilton Hound is very well developed physically and needs regular long walks, including outside the city, to keep fit. On walks, Hamilton’s hound is very energetic and hardy, in its behavior there is a clear desire to track down and chase prey. For a hunting dog, this is a wonderful quality, but in the city it is often inconvenient.

Hamilton’s hound does not require complicated care. Regular brushing is recommended to maintain a neat appearance and speed up shedding. Bathing is indicated as needed. Also, owners need to monitor the length of the claws, the cleanliness of the eyes and ears of the dog.

It’s not a dog that just goes around the block several times a day. As an active and energetic dog, the Hamiltonstovare- Hamilton Hound needs at least two hours of exercise a day, preferably without a leash, in a safe place to run and sniff.

It must be taken into account, that by its nature, planned, if it is bored or if it does little exercise, it will become destructive and will devote itself to dig, nibble and bark to divert you.

The Hamilton Hound is a very energetic and resilient dog that needs a lot of daily exercise. Your dog will need both physical and mental stimulation. Daily long and brisk leash walks are a must. This breed will be a great companion for running or cycling.

The Hamiltonstovare loves to hunt, run and play. But letting her off the leash is only possible in safe territory, because if your dog catches a trail, he may run away and not return. This breed is definitely only suitable for people or families with an active lifestyle. She needs a lot of space (and best of all, a field), so Hamilton’s hound is not for keeping in an apartment.

Two distinctive features of the feeding behavior of Hamiltonstovare dogs: high appetite and indiscriminate food, determine the tendency of this four-legged friend to be overweight and obese. If the feeding time has not come yet, and your pet is trying to beg for a tidbit with a pitiful glance, go for a walk or distract the dog with a game. Don’t let the hungry eyes of the Hamilton Hound push you to harm your pupil with extra calories.

The Hamiltonstovare eats whatever he finds, which can also become an unpleasant problem. In addition, he will definitely not complain about his appetite. You should not overfeed your pet, the food should be strictly dosed. Monitor your dog’s diet and consult your veterinarian when choosing a feed.

Note! Hamiltonstovare should not be overfed as he is prone to gaining weight and therefore must be monitored before giving her an extra bite. He often likes to beg for food, looking into the eyes of the owner with pitying eyes. But you cannot go to provocations, and therefore you need to refuse and teach not to do so. Hamiltonstovare should be in good shape all the time, so you need to take him out for a walk so that she keeps himself in shape, and his muscles and joints do not sag. Therefore, the more often walks are done, the better for the dog.

The Hamilton Hound – Hamiltonstovare is a smart, obedient and capable breed that loves and wants to learn, so it’s easy to train. However, it is an independent breed that can be stubborn and if you do not use appropriate training methods, you will not be successful.

For this breed, obedience training is very important, so he prefers to do what he likes, rather than what he is asked to do. If your dog trusts and respects you, he will quickly learn the basic commands. The Hamilton Hound is quite a sensitive breed, so in the process of training, use only positive methods: rewards, treats and praise.

With a competent trainer, the Hamiltonstovare will be able to learn how to perform almost any command and trick. Socialization, as with any other breed, must be started as early as possible.

The Hamilton Hound is the friendliest and most affectionate of all hounds, which explains the growing popularity of this breed outside of Sweden. The dog adapts well and will become a good family pet, but it needs a lot of physical activity, since the dog is very athletic. The Hamiltonstovare dog feels great outside the city, where you can run every day without a leash. The only problem is training. Having taken the trail, such hounds no longer stop, and it can be very difficult to restrain them. There is nothing wrong with this instinctive behavior, but you will have to focus on working out the commands “to me” and “to stand.” Hamilton Hounds are very sincere and cheerful dogs, which makes them irresistible. Grooming a smooth coat is easy.