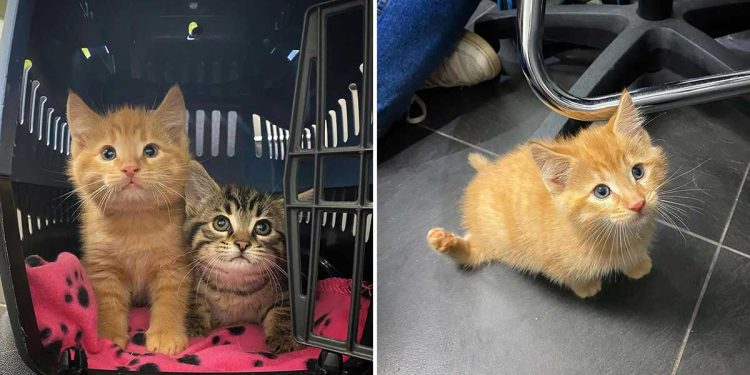 Rubbix is ​​a tiny orange feline who was born with crooked hind legs, he can’t help but show his excitement as the kitten is happy to be able to walk and run on all his legs for the first time in his life.

A few weeks ago, the sweet kitten and her sister Boo were taken to the facilities of Chatons Orphelins Montreal, an animal shelter located in Canada. The aim of the shelter volunteers was to be able to provide the kittens with the necessary care and to give them a second chance in life.

Unfortunately, Rubbix had a very noticeable physical problem with his hind legs, but he had the soul of a true warrior.

The kitten is happy to use its four paws

Rubbix’s hind legs were bent 180 degrees and going the other way. He moved using his front legs and back knees.

Despite suffering from this leg deformity, Rubbix didn’t notice any difference from other kittens and just wanted to play.

The feline always wanted to attract attention and was ready to play, and as soon as it saw something move, it tried to follow it with all its might.

Nothing could stop Rubbix from having fun, but to improve his quality of life, the rescue center took him to an orthopedist.

After several tests, the vet determined that the best option was to have the little boy operated on to correct his hind legs.

The earlier the operation was done, the more likely he would be to achieve good results.

As the days went by, his physical problem worsened due to the tension in his tendons, so it was necessary to act quickly.

We wanted to give him every chance to improve his quality of life so he can have the normal (pain-free) life she deserves.

Incredibly, 24 hours after the operation, little Rubbix was already on his feet, crossing the room unaided, taking his first steps.

He was so excited that he kept showing his joy at being able to walk like a normal feline. Quickly, Rubbix tried to explore every corner of his house, he wanted to move everywhere, and he was very happy with his new mobility.

Since his operation, his life has changed considerably.

Over the next few weeks, Rubbix used external fixators and her legs improved satisfactorily. It’s really surprising to see the progress of the feline, it’s a hell of a fighter.

Rubbix has become a very mischievous cat, he plays hundreds of pranks and keeps running around playing. He has made friends with all of the resident cats in his foster home and loves spending time playing and joking with them.

Rubbix is ​​soft, cuddly and very playful. He loves jumping and running, things that are new to him. The little boy was lucky enough to have surgery at such a young age and had another chance.

Now the adorable cat is 14 weeks old and on the verge of a full recovery from her physical issues.

Despite all his complications, Rubbix is ​​still happy and just wants to enjoy his life as he truly deserves.