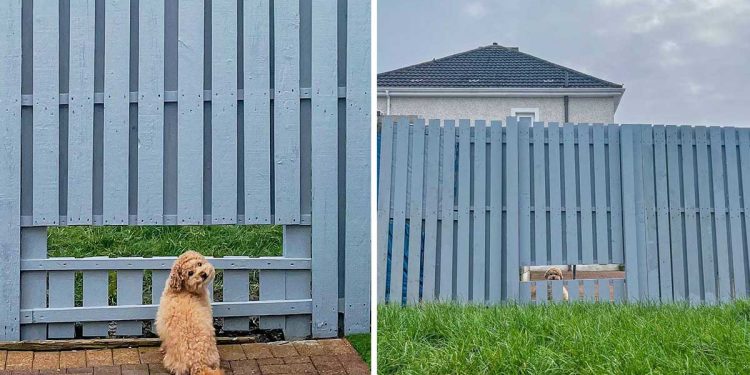 This sweet little dog is very happy that his family built a window in the yard fence just for him.

Harry is a lovely fluffy little dog who has always loved hanging out in his family’s garden, but being completely fenced in didn’t give him much visual access to see what was beyond. The fence posts were so close together that it was really impossible to see anything through them.

But then something happened that gave Harry a glimpse of what he had been missing all along. A storm toppled the patio fence and a new one with a slightly different design was installed.

When my dad rebuilt the fence, there were gaps [between the pickets]. That’s when I caught Harry looking through the gaps!

The sweet little dog was very excited, for the first time he could be aware of what was happening on the other side of the fence by looking through the cracks, but something even better was waiting for him, a window.

I jokingly suggested it to my dad afterwards. I woke up Sunday morning and my dad was making it for him!

Alex’s father took his daughter’s suggestion to heart and one Sunday morning he had already cut a window in the fence just so Harry could watch the world unhindered and the little dog was excited.

Harry knew it was for him!” He looked at my dad when he did it like he was waiting for me to finish.

Realising it’s from sticking his face through the fence when dogs pass by pic.twitter.com/g8sZHgewc9

Ever since his grandfather installed the window for him, Harry has spent much of his time glued to it, happily looking at everything and wagging his tail excitedly as people and other animals pass by the house.

He sits there for hours and only comes when called.

Harry wouldn’t have cared if the fence had remained as it was. But with this amazing modification, his grandfather was able to make the dog’s favorite pastime even more fun. And, really, Harry’s family also got a very adorable new view of the yard, that of a very happy pet in his own little window to the world.

It definitely makes us smile to see him watch the world go by.