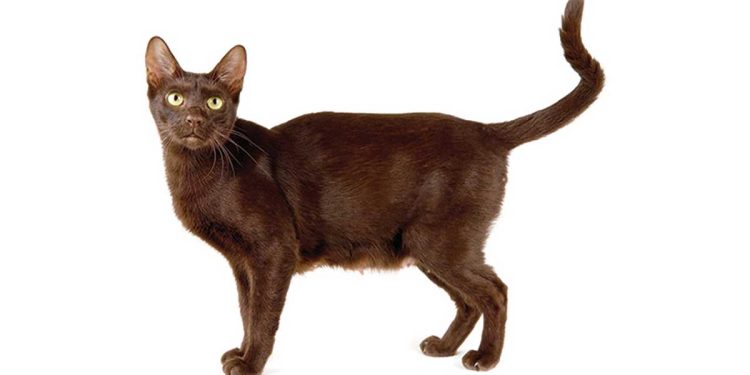 The phrase “Chocolate Treats” is often used by Havana Brown enthusiasts to describe this magical chocolate brown cat with bewitching green eyes. They are alert, intelligent, affectionate and sometimes show a mischievous character. A breed for a true cat lover, many say that when you were already the “owner” of Havana Brown, no other breed would be suitable.

Havana Brown is a very rare breed. If there was a list of endangered cat breeds, this breed would likely be ahead.

Note: At Havana Show exhibitions, the Havana Brown must have a brown mustache and otherwise he will be disqualified!

The Havana Brown cat is best described as a medium sized, built cat. He doesn’t need to be long or graceful like his Siamese ancestors or eastern cousins, and he doesn’t need to be short and twisted like the Persian or Burmese races. In all respects, this is an average cat.

Males tend to be proportionately larger and heavier in bone than females of the breed. A fully developed adult cat weighs 3 to 5 kg.

There is nothing in between in its deep, rich and shiny mahogany brown. Havana Brown’s soft, silky coat is short to medium in length. Lying close to the body, it should appear smooth and shiny. Feels like luxurious mink or sheer fine silk.

One of the most distinctive features of the Havana Brown is its beautiful head, which is slightly longer than its width.

The nose is broad with brown skin of a pink tint. The mustache should be brown to complete the coat. Havana is the only breed of cat that determines the required mustache color in its breed.

Alluring green oval eyes are one of the most interesting features of the Havana Brown cat. Eye color should be green. Any uniform green tint is acceptable, especially the deeper ones. Beautiful bright green eyes, combined with large ears angled forward, contribute to Havana Brown’s soft and characteristic face.

The tail is medium in length and tapers sharply to a slightly pointed tip.

They are purposeful, intelligent, affectionate and at times mischievous, and it’s no surprise that those who know this wonderful breed the best often call them “Brownies”. Havana Brown has something magical about it.

Living with Havana Brown is both a privilege and a pleasure. It is generally characterized as a somewhat shy and gentle breed that prefers to devote itself to one owner and enjoy a calm and comfortable home environment.

However, each cat has its own distinct personality. These wayward little brown characters insist on having the final say on absolutely everything.

Havana Brown lives comfortably with or with other cats and is generally sociable. A favorite pastime is hiding in corners or furniture, waiting for the opportunity to attack someone before running away. Havana Brown loves nothing better than having sex with someone. Sleeping partners can be other cats or their preferred owners.

They are moderately active compared to other short-haired breeds. They sprint around the house sometimes, but usually they limit themselves to less active activities like biting their toys, taking a nap.

Basically, you can say that Havana Brown is doing well. They tend to use the rags with little effort to train them.

Regardless of how the personality is expressed, most Havanas are people-oriented and make a wonderful and memorable addition to almost any family.

The Havana Brown is a short-haired breed that requires minimal regular grooming and grooming. The weekly grooming regimen includes cleaning the ears with a moistened cotton swab and trimming the nails. Quality stainless steel cat claw clippers are available at your pet store.

One of the positive aspects of this breed is the shedding or minimal shedding of the coat. To do this, a regular brushing routine must be established. Most Havana Brown cats love attention and readily indulge in a full body comb once or twice a week with a fine-toothed steel comb.

Havana Brown kittens should groom and bathe between 8 and 12 weeks to prepare them for future procedures.

One of the unique and surprising aspects of Havana Brown is her apparent lack of interest in “human food”. Most will be happy with their favorite canned or dry cat food and rarely show much interest in stealing food.

Although these conditions may be common, your Havana Brown may not necessarily have any of the following conditions. Choosing a reputable breeder from whom you can purchase your pet will help minimize the risks.

Hemophilia is a disorder that causes an inability to clot blood. The consequences can be serious, as even the smallest injury (lump or bruise) can lead to heavy bleeding. Hemophilia has been observed in the Havana Brown breed.

Urinary tract disorders are reported to be relatively common in these cats, so be sure to monitor your cats when they urinate to be aware of any changes in frequency, color, or volume.

Kidney failure refers to the inability of the kidneys to properly perform their functions of removing waste products from the blood and regulating hydration. Kidney disease is extremely common in older cats, but is usually due to toxins or genetic causes in younger cats.

Diabetes mellitus is a genetic disease that can occur in any breed of cat. If your cat’s weight and diet are managed well, your pet’s risk of diabetes will be much lower. Recently, an inactive lifestyle indoors has caused a colossal increase in the number of diabetic cats.

Allergy / Atopy: People are allergic to pollen, mold or dust, which makes them sneeze and itchy eyes. Cats have itchy skin. We call this form of allergy “atopy”. Symptoms usually start between one and three years old and can get worse each year. Licking (through grooming) of the affected area, rubbing of the face, and frequent ear infections are the most common signs.

Disadvantages of the Havana Brown breed:

Thus, the Havana Brown cat is a breed of cat that is all brown from nose to tail, with the exception of emerald green eyes. They are very people oriented and require a lot of attention. Havana Brown cats have a curious nature and use their paws to explore new things, as well as to demand the attention of their owner.

Havana is a hybrid creation, the result of breeding a black domestic shorthair cat with a chocolate Siamese cat at the end of the 19th century.

The breed was called both “auto-brown cat” and “Swiss mountain cat”.

Until the 1940s, however, the breed suffered from WWII and it took renewed efforts from a group of English cat lovers to restore the breed. The first recognized Havana Brown was launched in 1952.

Since then, the Havana Brown has become famous for its championship status as a competition for cat lovers, although the breed itself is still considered rare due to its particularly small breeding pool.