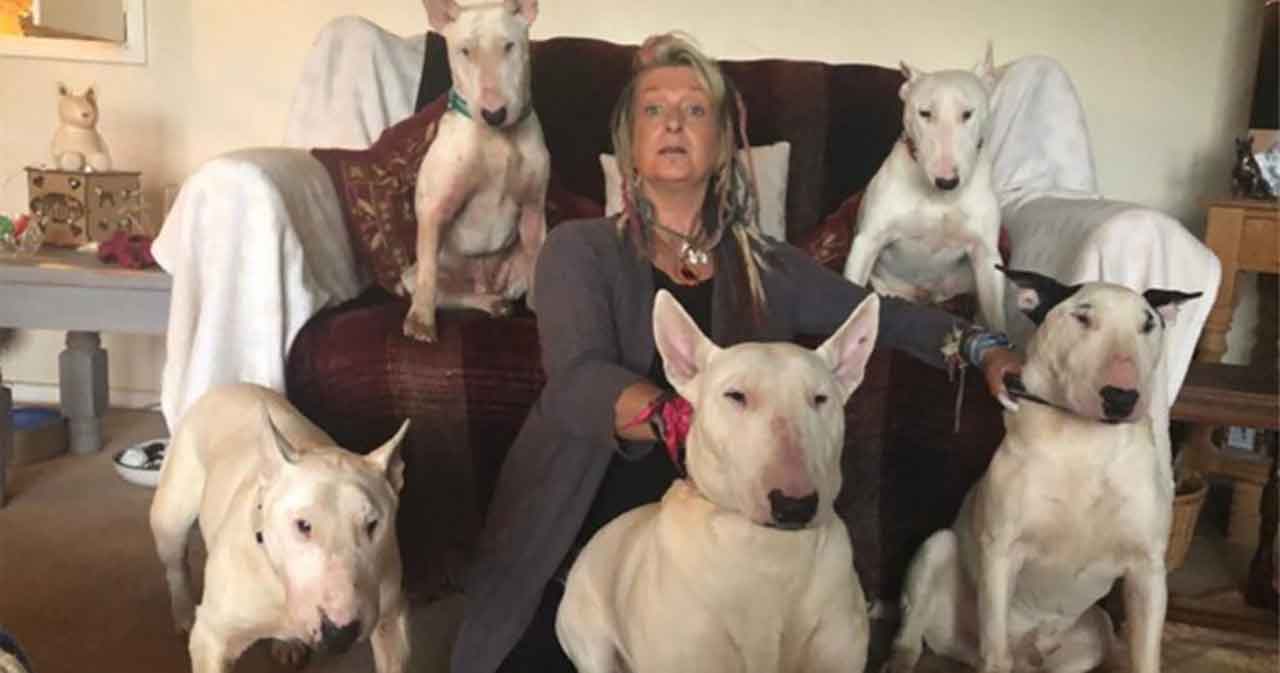 A man gave his wife an ultimatum to choose between him or her 30 dogs, the woman made the most logical decision.

When we have pets, they certainly become an important part of our lives and become another member of the family. The following story shows us a clear example of unconditional love for animals, in which a woman chooses her dogs first.

Liz Haslam met her husband Mike when she was just 16 years old. After finishing high school, the couple decided to get married.

The couple began their new life in the English countryside, in a two-bedroom house, next to a large rural garden, located in Barnham, Suffolk. Everything was fine, they had a son named Ollie and they shared more than 25 years of marriage, until her husband gave her an ultimatum.

Seeing that she had so much space in her garden, Liz decided to create the BedsforBullies foundation, in order to shelter the Bull Terriers in need.

It was something personal that she wanted to do, because from a young age, her parents nurtured her love for animals, developing a natural love instinct for dogs.

She grew up in an environment where her mother raised West Highland Terriers and her father owned a feed business.

The problem arose when Liz spent most of her time meeting the special needs of the rescued dogs. Mike felt that his wife’s life revolved around dogs, and as the shelter grew, he felt more and more neglected.

It was when Mike decided to confront Liz and made her choose between her 30 dogs or their marriage, without hesitation she chose the dogs.

My husband said; it’s me or the dogs. I have neither seen nor heard of it since. He told me he was going to leave and had arranged other accommodation, so he packed his bags and left.

She was very surprised by her husband’s reaction, especially because she thought that after so long, she would know her personality a little.

I thought that after 25 years, I should have known that giving up dogs was not part of my intentions at all. I knew from the moment we got married what it was. I don’t know what I expected.

It was clear that the couple’s goals were no longer the same and that they worked in different ways, so separation was the best decision.

Just as she was busy, Mike was also busy at work, not giving Liz the attention she needed, so she took refuge in the love of her dogs. As a result, her unconditional love for her 30 dogs was stronger than her 25-year marriage.

My passion for dogs was too great for Mike.

After their separation, Liz continued to care for her rescued dogs, many with special needs, some needing medicine and others just love.

It’s a very demanding job, Liz spends about 18 hours a day providing for the shelter, not to mention the large sums of money she invests.

At least half of the dogs have some sort of problem, five are deaf, two have an eye, three were fighting dogs, four have defects and one has brain damage.

Over time, the foundation has already treated more than 200 rescued dogs, treated them, recovered them, and then tried to find them homes.

BedsforBullies is a charity funded by donations and also by Liz’s business, a kind of kindergarten. The shelter offers a daycare for dogs, which provides the foundation with additional income.

Although his business was successful and the donations were sufficient, it was not enough to cover the maintenance costs of the whole place.

The treatments and drugs are very expensive, so she ended up with a veterinary bill of 4,500 $.

They also have arrears on the rental of their house, now their landlord insists that they move.

Despite all these problems, Liz is happy with the life she has chosen to follow and will not change her reason for being in the world.

I have moved so many dogs and I am now looking for a home. I chose to do this. I like.