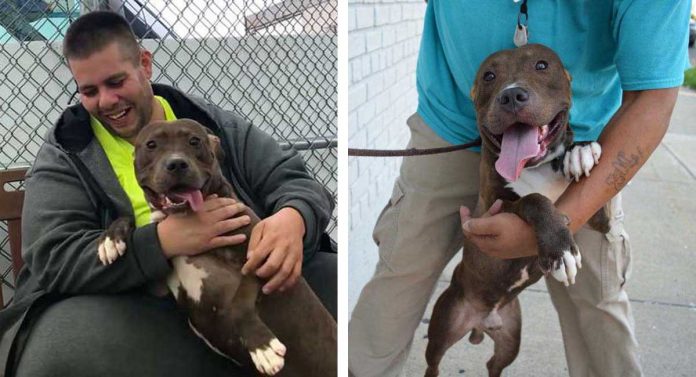 Mario Rodriguez is a truck driver who decided to travel 2800 to save the life of a pit bull who would be euthanized if he did not find a home soon. From the moment these two met an incredible connection emerged and now they are inseparable, the dog even accompanies him on his tours.

Mario Rodriguez works as a truck driver in Georgia and feels a great connection to pit bull dogs, that’s why ever since his wife told him that two-year-old Hickory was on the Animal Care Centers of NYC euthanasia list (ACC), did not hesitate for a second to give him a new lease of life.

“Everyone in our family grew up with race, and we raise our children with race as well. They are such great fans. Looking at Hickory’s photograph, I could tell that he just wanted to be loved. “

Mario was 2800 miles from the dog, but this was no impediment to him.

Mario decided to talk to his employer, and they helped him by scheduling a route to New York to meet Hickory. He called the shelter to let them know he would go and set out on his journey.

“I was going through traffic and calling the shelter every day, and by the third day, they knew my number. They said, ‘He’s still here, Mario, he’s still here!”

He drove 2800 miles to save a dog from being euthanized

“I parked my truck and ran in. As soon as Hickory saw me, he literally almost jumped out the door to the kennel. I said, ‘That’s it, buddy! We’re going home! ” He started wagging his tail going crazy. He immediately started jumping on me, licking my face.

Without a doubt the connection that emerged between the two was magical, they were destined to meet.

Mario added to The Dodo:

“It seemed like he was waiting for me. It was so strange. We had an instant connection. I have never had a dog so attached to me so quickly in all my life.”

Mario completed all the adoption paperwork and they quickly began their journey home; the dog was excited and jumped into the truck.

Hickory now has two pit bull brothers, Cooper and Angel, he seemed a bit shy at first, but after a few minutes they started running and playing.

“They immediately began to play like three small children. It was a sight to see.”

Hickory has a mild respiratory infection, but has already started treatment. He is very happy in his new home, and now he is even the co-pilot of his favorite person.

“You are seeing so many things that you have never experienced before. We have visited places all the time, like the park, or farms to the west, where he has met some horses. He barked at the cows on our way down the roads… He is really enjoying himself. “

“The first two nights he was with me in the truck, he slept with me and fell asleep while I stroked him. After that, he began to settle into his own bed. He sleeps in that thing like a king.”

Not only did Mario save Hickory’s life, but he’s saving a penny for every mile they travel to cover adoption fees for other dogs, and he’s planning to start his own rescue center for pit bulls once he’ll retire from his job as a truck driver in about five to six years.

Many people admire the relationship of this pair.

“God has blessed me so much in life, and that an animal is loved… there is no price for that. Hickory was worth every one of those miles.”

0 points
Upvote Downvote
Share
Facebook
Twitter
Pinterest
WhatsApp
Previous articleHelen, The Homeless Dog Who Surprised Her Rescuers After Being Petted For The First Time In Her Life
Next articleShelter Worker Rages At Man’s Reason For Returning His Older Dog