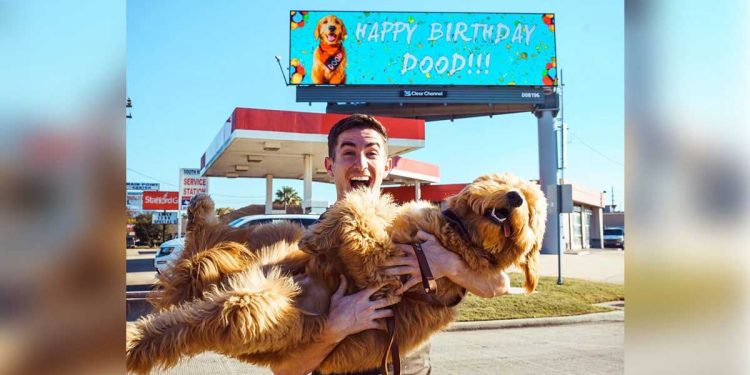 A man rents a billboard in Texas to let everyone know it’s his beloved dog’s birthday, a fantastic and unforgettable day.

Maxx Chewning felt the need to do something unforgettable for her dog Dood’s first birthday. But not only did he want it to be a special time for his pet, but also to let all of Texas know it was his dog’s birthday.

So he had the brilliant idea of ​​renting a billboard with Dood’s face as the protagonist.

The billboard company had never heard of anything like this and they were thrilled to have something creative and fun on their digital screen.

A man rents a billboard for his dog’s birthday

Although it was a fantastic idea for him, many of his friends criticized it, mainly because they thought it was an unnecessary expense, especially since their dog can’t read.

But Maxx pursued his idea and doesn’t regret what he did, for him it was a worthwhile investment.

I don’t even have a girlfriend so I don’t spend money on it, so why not spend it all on my dog? That seems like the best option, to be honest.

Since Maxx and Dood met, they have been inseparable, they do everything together and are undoubtedly the perfect complement, a true example of love and friendship.

He accompanies me everywhere I go and I take him to work every day. Every time I walk through the door, it springs from the ground and greets me with great energy and love. He is a wonderful dog and he has really brought happiness into my life. He is my best friend.

When the day of the birthday arrived, Maxx had prepared a list of activities that he would do with his faithful friend and they would be filmed.

They first went to a Starbucks for a Puppuccino, on the way they stopped in front of the sign, but Dood wasn’t interested, so they continued.

They then played and he even gave her a personalized dog cake, when night came Maxx brought Dood back to watch the light fence, saying everyone was so happy to see his face there.

The unforgettable day ended with a visit to the pet store, where he was free to choose what he wanted.

I let him choose what he wanted. He’s spoiled every day, so basically his birthday is all the time.

The dog was excited to experience all these adventures with his best friend, especially to receive all the treats and gifts.

And while Dood didn’t know why it was all happening, the important thing was that he was having one of the best days of his life with Maxx.

I think getting Dood was probably one of the best things I’ve ever done and it brings me so much happiness…I didn’t know I needed it.

Certainly, this day full of happiness will remain engraved forever in Dood’s memories.