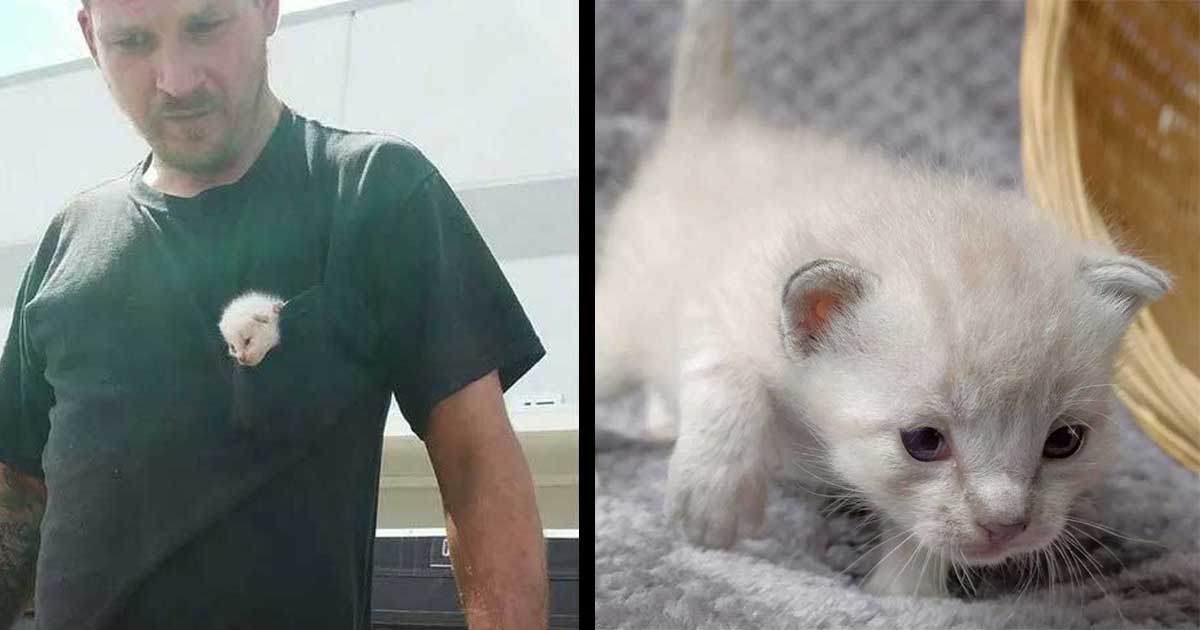 A month ago, Cliff heard meows coming from a pile of wood in a dumpster. He noticed a helpless little kitten hanging from sticks, letting out a few soft cries. Soon he discovered that there was more than one kitten.

“They were thrown in the dumpster and then wood was put on them,” Cliff told Love Meow.

Cliff spent hours digging piles of wood and steel to save the abandoned kittens. They were so young that their eyes had barely opened.

He first located the whereabouts of the kittens, then carefully searched the piles to retrieve them. After hours and hours of digging, he had all the kittens, but one of them did not survive.

“Mom chose a huge box to give birth and kittens were thrown in a dumpster. “

This is where Cliff found the kittens.

Cliff pulled a tiny gray kitten out from under a pile of wood waste. He placed the furry baby on his lap and gave the little one the necessary care.

He put the tiny kitten in his pocket to keep warm and continued to look for the other little ones.

After hours of searching, he pulled all the kittens out of the dumpster.

The kittens were so young that they would need 24-hour care.

Cliff and his family began to seek help, and after much searching, a rescue group responded by offering to help with open arms.

The good folks at “Watching Over Whiskers” (Springfield, Missouri) took the kittens into their care. The babies had a bath, a full tummy and a warm bed to sleep on.

“They both got milk … they were so hungry,” the rescue group said.

One of the kittens did not survive. The others fought.

Two of the kittens are smaller, while Roxy, a beautiful rescue mom, gives them milk and lots of care.

Despite a rough start, these kittens are now thriving in their foster homes. The kindness of their rescuer and the unconditional love of their caregivers and breastfeeding mother transformed their lives.

Now they are learning to explore and are excited about their new adventures.

Share this story with your friends. If you want to support their rescue efforts