Heartbreaking Photos Show Ukrainians Clinging To Their Pets As They Flee 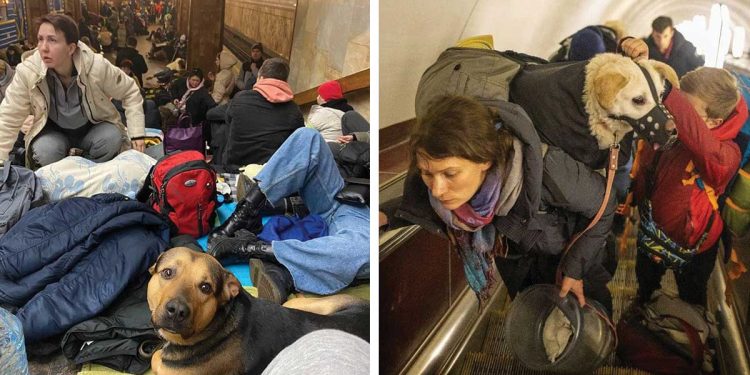 These heartbreaking photos show thousands of Ukrainians clinging to their beloved pets as they flee their country.

While large numbers of Ukrainians flee their country, many refuse to leave their pets behind. Hundreds of photos have appeared on the internet of people and their animals trying to cross the border to escape danger, or even images of them huddled in bomb shelters and subway stations.

According to the Daily Mail, Poland, Romania and Slovakia are allowing Ukrainians to cross borders with their beloved pets without veterinary papers. But there are still many animals that need food and medicine. Heroic volunteers stayed despite the attacks to care for these homeless animals.

In Romania, the main veterinary authority in Bucharest has implemented an emergency waiver, suspending vaccination, microchipping and documentation requirements. The only thing people are asked to do is fill out a one-time form for their four-legged friends.

Many residents of Kiev, the capital of Ukraine, leave the city by car, but due to the number of citizens trying to reach the borders, the roads are totally congested.

Another significant number of citizens are marching to speed up the evacuation process a bit; some are in metro stations and local bus lines; patiently waiting with their loved ones as the shelling continues.

Romanian charity, Casa Lui Patroclus, has been a strong animal advocate since 2016 and is now at the border to ensure that no family crossing into Ukraine has to leave their pets behind. The volunteers of this organization work to help find housing, shelter and veterinary assistance for animals of all species.

The organization receives donations to continue helping as many families as possible, donations can be made on its website.

Other non-profit organizations also help all the animals that still remain inside Ukraine with a shortage of food and medicine. One of them is Sirius, who for more than 20 years has been taking care of stray animals in Kiev and its suburbs.

As one of the largest animal shelters in Ukraine, Sirius needs all the support it can get. The shelter recently wrote in a post on their Instagram account:

We are in place. We are not going to run! We must believe in our country and our defenders!

Although currently the main roads of the country are blocked by the massive traffic of vehicles fleeing the bombings, people continue to seek a way out of the chaos and terror.

Many animal welfare organizations are working within Ukraine and its borders to ensure that Ukrainian families leave no members behind, including their furry companions.