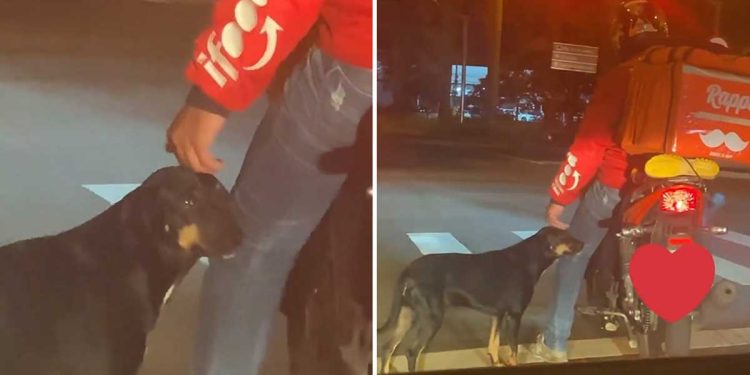 Adorable seemingly homeless dog who was at a traffic light approaches a motorcyclist and asks for love.

An apparently homeless dog has become a star on various social networks, thanks to a video that has gone viral where he is very nice to a biker who passed by the area where he guards.

Although dogs usually chase cyclists or motorcyclists, with the intention of making them feel uncomfortable, this little dog decided to do the opposite.

Danilo Ricci, a man who was wandering around in his car in the western part of Sao Paulo, had a big surprise. While at a traffic light, a seemingly homeless pup that approached a residential address immediately caught his attention.

The dog stopped in front of the change of light and, instead of barking, asked the man to pet him for several minutes.

Danilo was moved, so he decided to record the moment, while singing a fragment of the song “Ser um é amor”, by samba player Arlindo Cruz.

While waiting for the traffic lights to change, the little dog got lots of love from the courier.

Danilo said in the video:

His face! The baby is gaining a lot of affection as the signal changes.

When the light finally changed, the man thought the dog would follow him, but he decided to return to the sidewalk, patiently and gently.

Check out the adorable video below:

The man decided to share his video on social networks and quickly received more than 15,000 visits and hundreds of comments from Internet users. The scene moved many people, who also decided to post the video and one of these posts reached 294,000 views and over 500 comments.

The dog is a grace, even more beautiful the attitude of the biker. Nowadays, the normal thing would be to send the dog away, not to shower him with affection. Nice gesture !

On the other hand, Danilo decided to return the next day in order to find the puppy who was the protagonist of the scene and he achieved his goal. Interestingly, the nice dog named Negão approached Danilo and did not hesitate to ask him for many hugs and pats on the head.

After investigation, Danilo realized that Negão had a family; her mother’s name is Andressa and she has four siblings: Nega, Pandora, Pingo and Betoven. The sweet family lives in the square which is close to the place, and they have few economic resources, so they live on people’s donations.

Usually, the woman is always at the red light asking for help from passers-by, and Negão always accompanies her to help her. Even the cute puppy jumps on the doors of the cars asking for collaboration and in this way they guarantee their daily food.

Danilo was moved by her story, so he wanted to help Andressa by asking for help, through a video on Instagram.

The man believed that thanks to the notoriety that Negão had gained on social networks, it would be the best way to help his family.

Negão and his family hope that people who see the video will come to help them as best they can.

Without a doubt, Negão has managed to provide his family with the care they need, and his situation will probably change a little.