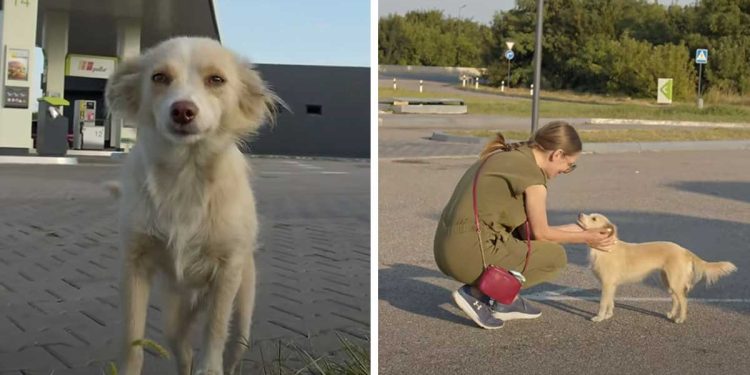 A homeless dog wandering through a gas station in Ukraine stumbles upon a woman who changes his life forever.

The life of a puppy forced to live outside is extremely hard and dangerous. Without a home to live on, these helpless creatures desperately try to find shelter to protect themselves, however, their lives can often change thanks to kind-hearted people.

This dog lived near a gas station in Ukraine; He constantly begged for hugs and approached to greet people who visited the place. She was always very kind and loving, but what she wanted most was that someone could one day give her a forever home.

Luckily, her story has a happy ending, because through a series of videos and pictures of the dog waving to everyone at the gas station, she caught people’s attention.

A homeless dog runs to his rescuer

In the videos, the dog is always smiling and wagging its tail, so some people were touched by its adorable attitude. Among them, there are very nice people who dedicate their lives to helping helpless animals, like the founder of Love Furry Friends.

After watching the videos, the woman prepared to go rescue the dog. She has always been characterized as an angel for homeless animals, so she is ready to do anything in her power to help them.

So, without weighing him twice, he jumped in his car and drove to the gas station so he could find and help the little dog.

When she arrived, the workers informed her that the dog spends most of her time at the station and that she is homeless. Therefore, the woman knew that the dog was in urgent need of help, and when she approached her, the animal ran up and greeted her happily.

It seemed the dog understood that she was there to help, and she quickly showed how grateful she was. Once safe, they took her to a vet to have her health checked.

After several tests, the veterinarians determined that she did not suffer from anything serious, and after a visit to the hairdresser, the image of the dog changed.

The dog, whom they named Linda, was ready and entered a house, perhaps for the first time in her life, where she received the best food.

Linda is believed to be around two years old, and despite her sad past, she has quickly settled into her comfortable new home.

Linda is very happy and will stay with her rescuer until they can find her a loving forever home.