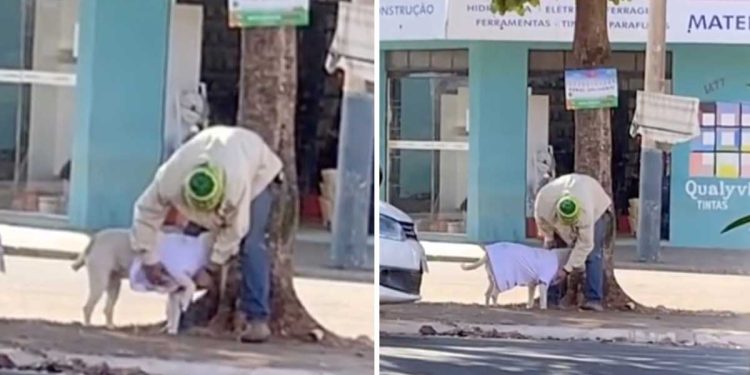 What this man did was recorded thanks to a young woman who witnessed the act which is now much talked about on the networks.

Often times, the people with whom life haven’t been entirely generous are sometimes the ones who value really important things like loyalty, love, and friendship the most.

This is why it is not surprising that those who live in poverty more than once give lessons to all mankind.

This is precisely what was experienced by a young woman in Brazil who portrayed an incredible and unique moment that went viral on social networks.

The gesture of a homeless man with his dog

The young Flaviane García was walking in a well-known avenue in the municipality of Serrana, in Sao Paulo-Brazil, when she was moved by the kind gesture of a homeless man.

The man was walking with a dog we assume to be his pet and he leaned down to shelter and protect her from the cold. Although it seems like a simple gesture, not all humans look at their four-legged companions with such love.

She also deserved to be warm

With a lot of love and care, the man dresses his dog in a white shirt, to try to warm her up a bit.

These days have been a harsh winter in the Brazilian capital and covering up in warm clothes is a necessity for its inhabitants.

So, this dog couldn’t stay naked

When Flaviane, who found herself on the other side of the sidewalk, realized what the man was doing, she didn’t want to miss the opportunity to pull out her cell phone to record everything.

“I was so happy and with a warm heart that I decided to film it and publish it, to show that all is not lost and that there are still good-hearted people,” Flaviane wrote on his Instagram.

The girl shared the recording on her Instagram account and the praise from the Good Samaritan immediately began to rain.

While there are so many well-placed people in the world who just mistreat their pets, this man who lives in poverty is putting aside what little he has to care for the dog.

In many cases, those who have the least are the ones who give the most. It’s inspiring to see how this man who survives on the streets fights for the welfare of the animal who, like him, is helpless.

It is undoubtedly a fine example of humanity for all

Flaviane said in the video that the scene occurred in a solidarity line which is outside the beauty salon she usually frequents.

Solidarity lines are spaces where people can leave clothing, personal hygiene products and non-perishable foods for others to take with them if they need them.

Obviously, this man needed to protect himself but he was not thinking only of himself, but of his dog and this gesture of love is what moved us all.

After the video was published, a company in charge of making animal clothes decided to donate for this man and dog, but a problem arose: Flaviane does not know the Samaritan and asked for help with locate it and support it.

The power of the networks must be felt, help us locate this man. We hope he can be identified for assistance.