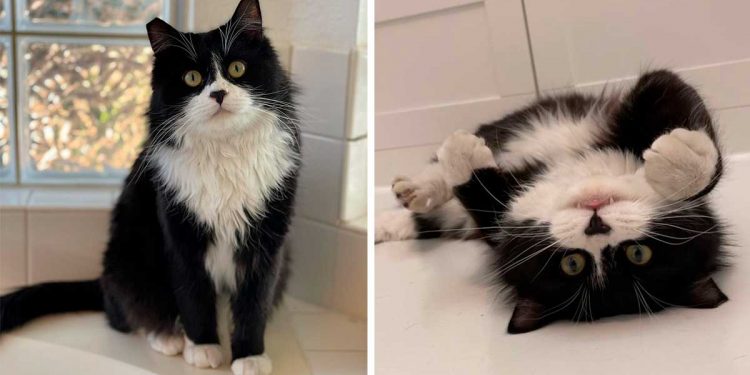 An adorable homeless kitty found on the streets of a Las Vegas neighborhood chooses to visit the right home to ask for help.

An adorable homeless kitten wandering a neighborhood in Las Vegas, Nevada chooses to visit the right home to get the help he so desperately needs, and luckily his life changes forever.

The young tuxedo cat appeared on the streets of a part of town in search of food and was around 8 months old. The kitten walked to a family’s garden and watched them from afar, at the time he did not know that he had chosen the right place to rest.

Home owner Danielle, who is also the founder of With Grace, a local kitten rescue centre, spotted him.

A homeless kitten chooses to visit the right home

She decided to ask several neighbors to see if anyone recognized him, but no one gave any clue that they knew him or who he belonged to.

We have a colony of Tuxedo cats (all neutered) in our neighborhood, so we weren’t sure if he was part of the colony or not.

Danielle was able to safely catch the cat and decided to take him to the vet to be examined and checked for a microchip. The cat he named Buddy had no microchip, was examined and neutered, then brought back to the cat colony.

Unfortunately, at the time, Danielle’s house was filled with many rescue cats, so she couldn’t take Buddy in, but she hoped that he would keep coming home and gain her trust to take him in as soon as possible. a place would become available.

She kept food available in her garden every day to feed him.

I promised him that if he came back, as soon as we had a place for him, we would take him inside and find him a forever home.

Buddy would visit his trusty caterer every day and then have a good time in his backyard; it was very comfortable.

Over time, Buddy got to know the family and even tried to interact with the cats through the door. Danielle began working to earn his trust even more so she could attract him, but despite her efforts, he was still elusive and shy.

He would sit on our sliding glass door and watch our cats, he wanted to play with them, but he didn’t have the courage to come in.

Because of this, Danielle made the decision to set a trap in her backyard to try and catch Buddy, and within minutes it worked.

At first, indoor life was not easy for Buddy, perhaps because he had lived on the streets all his life.

Danielle and her husband worked very hard to adapt the cat to his new home and together they spent a lot of time with Buddy, trying to convince him. When Buddy realized that life inside wasn’t so bad and he was safe, he started showing his true self.

Little by little he came out of his shell and turned out to be a very sweet cat, he even constantly asked for affection, and he loved caresses.

He’s silly, playful and adorable. When my husband walked beside her, he would stand on his hind legs and attack her legs.

Buddy is very mischievous and has grown into an energetic cat full of joy; there is no doubt that his life on the inside has changed him. Buddy’s life had changed dramatically and he was finally ready to be adopted by a family that would treat him like royalty.

Ryanne and Jake, a couple, saw a post about Buddy on social media by chance and fell in love with the cat. The couple had recently lost their kitten Shadow, and out of it, something about Buddy touched their hearts.

After a few days, the couple adopted Buddy and named him “Ziggy”; he had officially become a member of his family.

He’s so sweet and loving, he stole my heart. He is already healing the wound left by Shadow’s unexpected passing and filling her with his love.

There is no doubt that the kitten that night chose to visit the right home and, thanks to this, found a forever family.