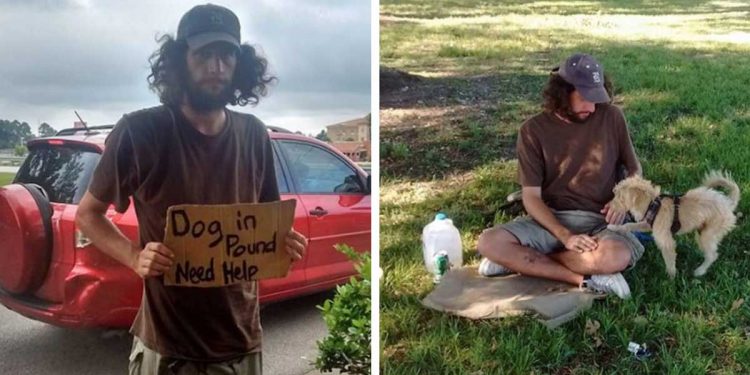 Nothing compares to the joy of seeing your pet happy, because it’s like a little child that’s hard to part with. But if you imagine yourself in a difficult economic situation, in which you need to find shelter and food every day, maybe you will think twice about taking on the responsibility of caring for an animal. of company.

However, Patrick, a homeless man in Houston, USA, proved that priorities don’t change when you love dogs. So, he made a sign asking for help paying for his dog Franklin, who had been in the kennel for a few days. Wilma Price, a woman walking in the Walmart parking lot, looked at her sign and decided to help this man find his beloved Franklin.

After his day trying to help this man and his dog, he shared his experience on Facebook, along with photos he took of Patrick and his dog Franklin.

I was walking through the Walmart parking lot and saw a homeless man sitting on the sidewalk with a sign that said ‘my dog ​​is in the kennel, please help me’. I had never read this sign before. I read: ‘I need a beer’, ‘I lost my job’, but never one like this.

The owners of the kennel explained to Wilma that the price of the dog’s stay had been very high due to the food costs charged and the treatment injections applied during the stay, because Franklin had arrived malnourished. In the end, the pup was back in good health and showed no signs of rabies or any other illness.

I asked him how much money he needed to get his dog out of the kennel and he said $120. I only had $8, but I told him I’d see what he could do. At first, I called the kennel to verify that the man’s story was true and it was; The bond was $120.

She enlisted the help of friends to get Franklin out.

I spoke to a friend who could help us, but first she asked me to tell her everything I knew about him, so I did some research. His name is Patrick and he is 30 years old and claims to have spent two days in jail after breaking into someone else’s property; that was why the kennel took his dog. I told Patrick that thanks to my friend I already had all the paperwork ready to get Franklin out, so we went together.

Wilma was happy to reunite Patrick and Franklin

When he came out, Franklin was shaking. I was so happy to see this man reunited with his dog that I thought sometimes you had to dig deeper into his heart and realize what is right. This man loves his dog: in his backpack he carries a bowl and the dog’s toys. Patrick helps Franklin to survive in the world. This man was really grateful, and I could see his tears when he saw his dog come out.

Grateful, Patrick offered his money to Wilma, but she did not accept it.

We’ve all had a hard time in our lives, that’s why you always have to pay up front, because you don’t know who the next person will be who can help you. What I do know is that this man loves Franklin. And even if he wanted to give me the money he collected, I couldn’t accept it. Maybe with that he would have a nice dinner today. In the end, he told me his dog always ate before him. God bless Patrick and Franklin tonight.

Would you help Patrick and Franklin if you met them on the street?