A young homeless man who left his dog in a shelter finds her and they find a home together. 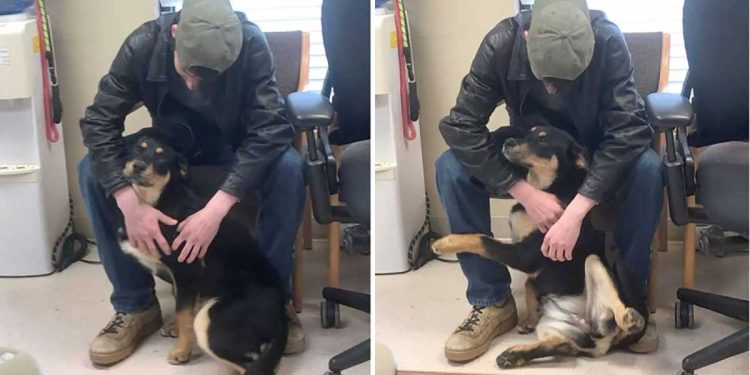 Kris Robinson, acting director of the Senatobia-Tate County Animal Shelter, was sitting in the main office when he noticed a person crossing the yard. It was about a young man who was closely accompanied by a dog which seemed to be his pet.

” He told the dog to stay outside and she just sat down. He came in and said, ‘I wonder if you can babysit my little dog. “

The director explained that the shelter was unfortunately full, but that he could see that he needed help and a little luck in his life. The young man lowered his head and confessed that he had nowhere to live, that he was taking refuge under a bridge and that he simply could not take care of her.

A young homeless man finds his dog in a shelter

“Besides, he said, ‘When I go to get a job, I hope she stays and so far, she’s been there when I come back, but I’m only worried about her.'”

The man observed how attached the dog named Jada was to his father, so he decided to help him and asked him to fill out a resignation form.

As the young man walked around the place, the dog clung to him and squeezed his leg, she was a little confused.

“She would come very close to him and sit down; she was very scared.”

Eventually the teenager left, leaving a bag of dog food at the shelter, but as he walked away Kris could tell he was crying.

To calm her down a bit, Kris took Jada to the main office, but the dog was still very confused because her father wasn’t there.

“He got up in one of the chairs and looked out the window. I went out the back to do some cleaning and when I got back, she was lying with her food.”

The next day, Jada felt a little more comfortable, but Kris knew that no one could ever take Jada’s father’s place. So, the man decided to post the harrowing story of the dog on Facebook, for help, but he never imagined the great impact of his message.

The director of the shelter just wanted to emphasize the action of the young man and his character, since he didn’t ask for anything, he just wanted Jada to be well.

Before long, messages started coming in from all over the country to take care of the dog, but the man wanted better help for them. Therefore, Kris contacted a local family, who offered to take in both the young man and his dog, and wanted to help them.

At first, the young man did not seem very convinced to accept the offer, but the director managed to convince him and he returned to the shelter for a meeting.

“I contacted him and said: Listen, these people want to help you. He said: What do you mean? Do you want to adopt her? Can I go see her first And I said to him: No, my friend, they want to help you.

When the teenager arrived at the shelter accompanied by the family who would help him, the reunion with Jada could not have been happier.

“She ran up to him and jumped on him. He just loved her and had a big smile on his face.”

Now Jada and her father have a place to call home, and that’s where they’ve been getting the help they’ve needed so badly from the start.

Jada receives medical treatment, and the young man can concentrate on his education, so he puts all his affairs in order.

On the other hand, Kris couldn’t be more proud because, thanks to him and the kind family, there is one less dog at the shelter and one less young man on the streets.