Man Doesn’t Interrupt His Dog’s Comfort, So He Sweeps Around 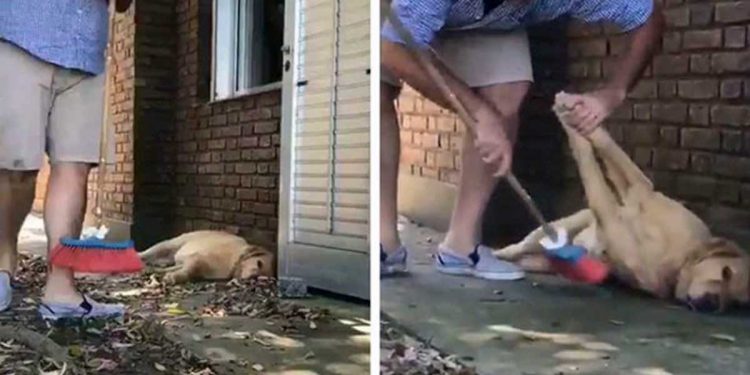 Lazy is a golden retriever who shows us what makes her happy, taking naps while getting in the way of her owner’s chores.

Lazy is a 10-year-old golden retriever who has no interest in housework at all. She shares her home in Argentina with her owner Lucho Bugallo, one could consider that what she likes the most is doing nothing and spending her days at home lying down taking long naps.

It’s not uncommon that we can have times of the day when we’re lazy and want to stay in bed, but this funny golden retriever has managed to show us that his passion is to lay down and do nothing at all. everything and how little she cares about doing tough housework.

At home we call her a carpet, she is happy to spend her days lying down.

The Golden Retriever does not move when cleaning

This sweet and funny video has made the rounds on social networks and has already been reproduced more than 570,000 times on Facebook, generating hundreds of reactions from Internet users.

Seeing how carefree Lazy is on the sidewalk and hindering Lucho’s chores without remorse, it caused quite a stir.

Lucho spoke with Time and told them:

Lucho doesn’t seem to mind his dog’s laziness, even if it means he has to do housework with a bit more effort, for Lucho happiness and Lazy’s happy face are his greatest reward.

Lazy shows us what the company of a pet means in our home and how wonderful and unique it becomes with its particular and charming personalities.