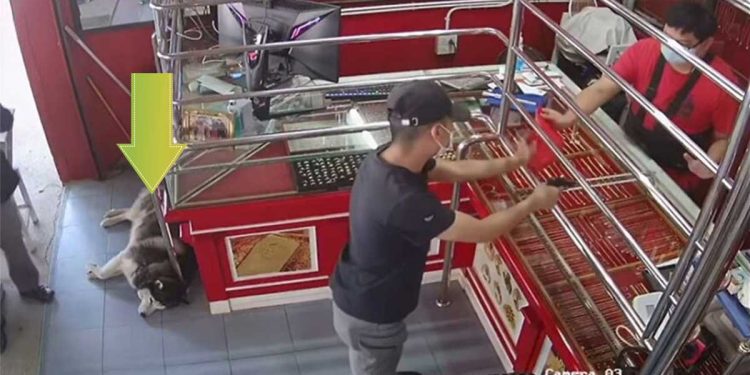 A sweet husky who was adopted by a Thai family, sleeps during a robbery in his father’s jewelry store.

Dogs act instinctively in a dangerous situation, which is why some people want to have a guard dog in their home. Some breeds of dogs are better than others at this task, especially those that are brave and know when to fight off a dangerous intruder.

But for the owner of a jewelry store in Thailand, Mr Worawut Lomwanawong, things changed when his shop was “robbed”. His Husky dog ​​named Lucky, turned out to be the worst guard dog known on social media, for the situation in which it all ended.

The curious incident began when Lucky’s father decided to perform a safety test at his jewelry store located in Chang Ma City.

An adorable husky sleeps during a “flight”

To do this, the man performed in an armed robbery simulation where the suspected thief carried a fake weapon and threatened the owner. All for the purpose of getting Mr. Worawut’s money, and Lucky didn’t budge an inch; in the end, the thief took the loot.

In the jewelry store’s security camera, Lucky’s amused reaction was recorded, which definitely did nothing to prevent the assault.

In the video, Lucky can be seen sleeping before the thief entered, so the attacker entered undetected by her. The thief then began to bully the store owner, but the dog continued his peaceful nap, completely unaware of the situation.

Worawut looked at Lucky, hoping he would try to react and at least bark at the thief, but he didn’t.

The situation turned out to be a lot of fun, because finally Lucky showed his priorities while sleeping, in addition, the security drill turned out to be a complete failure. The man decided to post the video on the internet and within a short time people showed interest in the funny situation by going viral.

In the middle of an interview, the jewelry store owner attempted to explain what happened and the real reason why things happened.

It was Thai police training on what it would be like if a thief came into my store and stole all the jewelry. The armed robbery in this video is from a cop that Lucky already knew; it may -be that’s why he didn’t do anything.

The man also said the funny thing was that his dog kept sleeping and he never thought the video would go viral.

In a short time, the video reached over a million views, over 20,000 reactions and thousands of funny comments about the incident. The jewelry store was the first to carry out the security tests, perhaps for this reason the protocols failed at the time of the exercise.

However, the man believes that if it was a real theft, Lucky would have reacted correctly by warning him of the theft.

Ever since Lucky was adopted, she has been shown to be very smart, she used to get hungry when wandering the streets, but she got food from people. After seeing Lucky several times, the man decided to give him a forever home, and he’s been part of the family ever since.

I don’t know how old Lucky is because before I adopted her she was a homeless dog, but so far she has lived with me for 7 years.

His name was chosen metaphorically, as they knew he had had a very difficult life and that his new life would be full of luck.

Usually, Lucky stays in the store with his human dad, but what he really enjoys is taking a nap there.