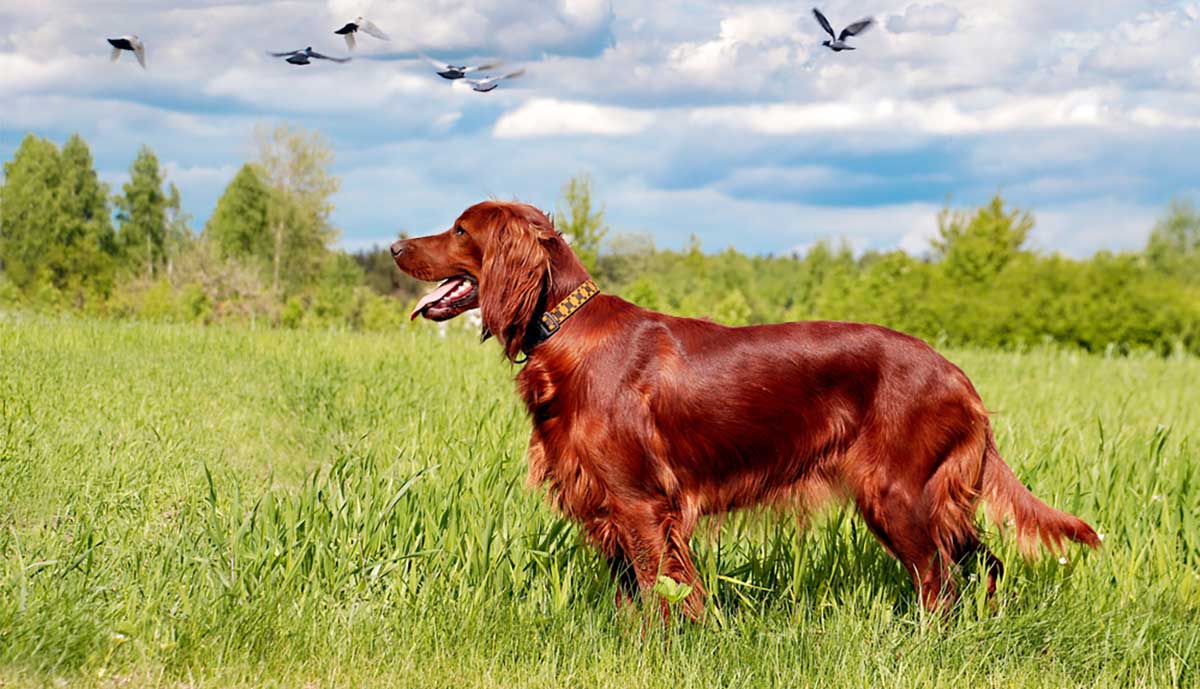 The Irish setter is considered one of the most beautiful and glamorous dogs on the planet, because of its slender figure and its beautiful reddish fur. Even if he was originally a hunting dog, his undeniable beauty made him a dog that frequents dog shows more than hunting grounds.

He is much appreciated for his noble cachet, his contagious enthusiasm and the beauty of his mahogany coat, a physical characteristic which also makes him known under the name of Red Setter.

It would seem that the hunting dog should be strict, obedient and rather malicious. After all, his mission is to track down and get game for his master. In fact, hunting dogs are friendly, playful and affectionate. The proof is the Irish Setter.

In this breed sheet of Pets Feed, you will know all the information you need if you plan to adopt an Irish setter dog, such as, for example, that he is an independent, sociable, curious and very active dog. , or that it is perfect for living with children, because the Irish setter is very friendly and familiar.

Among all breeds in Ireland, two are in a special position: the Irish Setter and the Irish Wolfhound. These two species are the pride and national treasure of the country. The wolfhound is mainly popular in his homeland, while the Irish setter is widespread and popular all over the world, constantly participating in exhibitions in different countries.

By the 18th century there was already a well-defined type of red and white Irish setter that was widely used for hunting birds, but it was not until the end of this century and the beginning of the 19th century that they have started to breed entirely red dogs.

At that time, these dogs were used exclusively for hunting, and there was a habit of killing puppies born with undesirable characteristics for such activity. Around 1862, a puppy that did not have the desired characteristics was born on a farm. He had a longer head and a more delicate constitution than the others in the litter, so the breeder decided to drown him like that. was the custom. Fortunately for the puppy, another breeder who loved these dogs was delighted with the puppy and decided to keep it, saving his life. This puppy was named Champion Palmerston and has become a sensation in dog shows.

This completely changed the history of the breed, as the champion dog Palmerston left many descendants and became the type desired by breeders, although they are no longer hunters but dogs linked to dog shows. This is why all of the Irish Setter dogs today have their ancestor as the little puppy that was saved from drowning. This is also why today’s Irish Setter is more common as show dogs and pets than hunters, even though they still have the strong instinct of hunting dogs.

Subsequently, already in the 20th century, some enthusiasts of the breed made efforts to recover the original Irish Setter and obtained a slightly smaller, compact and shorter-haired variety than the current Irish Setter, but never gained popularity among hunters. Today, this dog is practically absent from the hunting grounds and looks much more like an excellent pet. Despite its beauty and good character, the breed is not one of the most popular in the world, perhaps due to its great need for exercise.

Physical characteristics of the Irish setter

The Irish Setter is a large dog. But it is worth noting that in comparison with other large species, the setter does not have too developed muscles.

In appearance, the physique of the Irish Setters is divided into two types:

The Irish Setter breed standard is uniform. According to him, the growth of adults is 55-67 cm, weight is about 27-32 kg.

The neck is of medium length, strong, with a nice curve. A narrow, rather long head rests on it. The occipital protuberance is pronounced. The forehead is voluminous, oval in shape. The length is equal to the length of the muzzle. The ears are drooping, set low with adornment of hair.

Medium-sized almond-shaped eyes. The eyelids are not droopy. The color ranges from hazel to deep brown. The look almost always expresses friendliness, joy and curiosity.

The jaws are strong. The nose is not too large with large nostrils. Lips of medium thickness, not drooping. The teeth are medium in size. Scissor bite.

The physique is elongated. The belly is tucked up. The bottom line is a nice curve. The back is straight. The chest is of medium width, dropping down to the elbows.

A ponytail with beautiful adornment hair. Wide at the base, gradually tapering towards the end. The Irish Setter holds it at the level of the back or slightly higher, not upright.

Legs moderately muscular, even, strong, rather long. Paws are not large, round in shape.

The coat is of medium length, smooth, straight, slight waviness is allowed. There is a slight undercoat. On different parts of the body, the coat is not the same:

The color ranges from deep mahogany to chestnut, light red. White markings on chest, toes and muzzle are acceptable.

Character and temperament of the red Irish setter

Generally speaking, Irish setter dogs are cheerful, independent, very sociable and curious. They are also intelligent and friendly, but with a strong hunting instinct.

These dogs are easy to socialize, both with adults, with children, with other dogs and even with other pets, as their innate aggressiveness is low. Therefore, they are excellent pets for families with children or who already have other pets. However, it is important to take the dog’s socialization process seriously from an early age to avoid fearful behavior or aggression due to fear in adulthood.

When properly educated, the Irish setter does not present serious behavioral problems. However, you have to take into account that it is a very active dog that needs a lot of daily exercise. If he does not exercise daily, he becomes frustrated and easily develops destructive dog habits.

Due to his friendly and sociable nature, this dog is an excellent pet for those who have enough time and space to give him love and exercise daily. The Irish setter is generally gentle and good with children, so it is generally a good pet for families with children. Of course, due to its high activity level, it is not the right dog for sedentary people and is better for dynamic families who enjoy outdoor activities.

The average life span of an Irish setter is 12-15 years. It depends on the owner whether his dog will be a long-liver. It is the owner who must monitor the health of his pet.

It is necessary to carry out preventive examinations once a year in a veterinary clinic. Deworming, treatment with skin parasite preparations and routine vaccination are also important.

Irish setter dogs have a predisposition to the following diseases:

You can keep the Irish setter both in the apartment and in the house. A private house with a fenced land is recommended. Aviary is not recommended, except that the aviary will be spacious and equipped with an insulated booth or a dog house with heating. Categorically you cannot keep the setter on the chain.

The above statements are explained by the following features of the breed:

You cannot leave such a dog for a long time. From loneliness and boredom, a dog can get sick, become depressed or become aggressive, destructive. If there is not enough time, it is recommended that you keep two setters together. Together they will find something to do and will be easier to bear separation from the owner.

The Irish Setter is a very active dog. Physical activity and daily training are vital for him. Therefore, every day walk your pet at least twice. Each walk lasts about an hour.

In public places it is not recommended to lower the Irish setter off the leash. He has a highly developed hunting instinct, because of which he can arrange a pursuit of a cat or even a bird. Also, this inborn bloodhound, smelling an interesting smell for him, is capable, having forgotten about the owner, to rush in the wake.

At least once a week, take the Irish setter out of town, into the forest, field or to water. There he will be able to run around freely. It is worth noting that Irish setter dogs swim very well. Therefore, in the summer, the dog will gladly splash around in the river or in the lake.

In the house from the first day, determine the place of the dog. Arrange a bed there, put bowls for food and water. Also make sure the dog has a lot of toys.

To maintain health and a beautiful appearance, we conduct the following procedures to the Irish Setter:

The power of the Irish setter must be balanced. You can use a natural way of feeding or artificial. In the first case, buy quality products and do not forget about vitamin and mineral supplements. If you get dry food, it must be premium.

It is necessary to always feed your dog at the same time. Fresh water should always be available to the dog. Keep food and water containers clean.

It is worth noting that in the body of the Irish setter, too much metabolism occurs. Therefore, representatives of the breed need more food than other types of dogs with the same height and weight.

It is allowed to feed the dog with natural and dry food. For example, hunters prefer to feed farm animals to work animals. A natural diet consists of:

It would seem that such intelligent, intellectually developed dogs are easily trained. But besides mental abilities, they are characterized by mischief, injustice and independence. Therefore, the process of education and training requires patience, consistency from the Irish setter.

With the right approac, you can achieve high results in agility, search and obedience. The most difficult thing is to get an unquestioning obedience from the restless pet and fulfill the command “to me”, “next to me”.

Special preparation is not required for the exhibition representatives of the breed. If the Irish setter is working, he needs to undergo special training. The training of the hunting dog begins at the age of eight months. Admission to a real hunt dog is possible only at the age of one.

The dog breed “Irish Setter” is suitable even for inexperienced owners. The main thing is to find an approach to the pet and conduct the correct training with the help of a dog handler. The Irish Setter is definitely not suitable for couch potatoes, people with a sedentary lifestyle. Before buying a puppy, you should familiarize yourself with the pros and cons of the Irish setter.