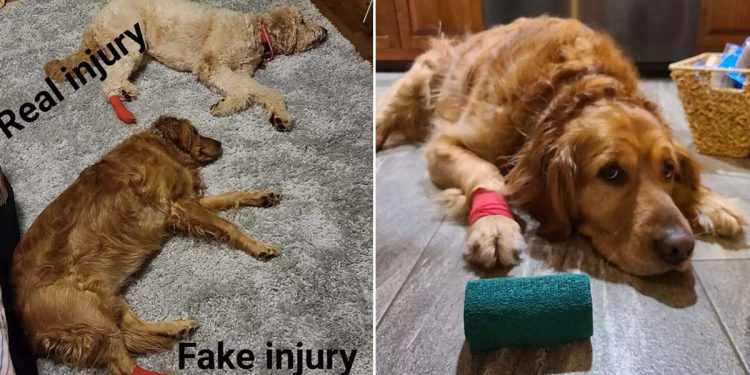 Adorable little dog who was jealous of sharing her mother’s love with her brother, hopes they’ll take care of her too.

Mabel had a happy life as the only dog ​​in the house, but when she turned 3, her family decided to ruin it by giving her a little brother. Unexpectedly, Mabel had to share her parents’ attention and love with an adorable little goldendoodle puppy named Milo.

Mabel and Milo’s mother Carrie Bartsh always tries to give them the same amount of love and attention so neither of them gets jealous, but sometimes it’s not that easy.

They both get super jealous if the other gets too much attention. I try to keep everything equal and fair with them…

Jealous dog is also waiting for his bandage

Mabel even gets jealous of the cat. The feline needed ear drops and the dog sat waiting for his turn.

However, like most siblings, Mabel and Milo get along, play, fight hard, run, and give each other lots of love.

Mabel and Milo fight like puppies, growl and bite each other. Milo runs 100 mph and hits Mabel, so he does the same to her.

Although Milo is taller and faster, Mabel is the one giving the orders and keeping him at bay, but Milo keeps her young.

Last week, something curious happened, it turns out that while the two brothers were walking outside, Milo had a little accident.

We were coming home, and the dogs were doing their typical fight as they ran, when they stopped I saw blood on the snow. I realized it was Milo…it was from one of his legs.

The woman checked the dog and found a small cut on it, so she rushed to get medical supplies from a veterinary clinic.

Mabel didn’t seem to care much about her little brother’s injury, until she realized that her mother was paying more attention to her.

When I called Milo to change his dressing, Mabel saw all the supplies, immediately came over and dropped right in front of me, lying on her side ready to be treated.

The woman got Mabel moving and once she took care of Milo and left, Mabel went back to bed and waited her turn.

At that moment, Carrie knew there was only one thing Mabel wanted and she had no choice but to start treating her as planned. Then the woman ripped an empty wrapper to trick him into thinking she was going to put a gauze pad on it and pretended to put one on his leg.

Then I wrapped her leg in a little vet bandage and gave her kisses on the head and told her she was done. She looked quite satisfied, got up and continued on her way.

Even if the situation was very curious, Carrie had to laugh a little because in the end, who puts fake bandages on a jealous dog?

Fortunately, Milo is much better and his leg is better, although his mother makes sure to change his bandage every night.

Not to mention that if Milo receives a new bandage, his jealous sister will also need a new “care” from mom.