A Police Dog Discovers And Saves 3 Abandoned Puppies. He Takes Care Of Them As If They Were His Own 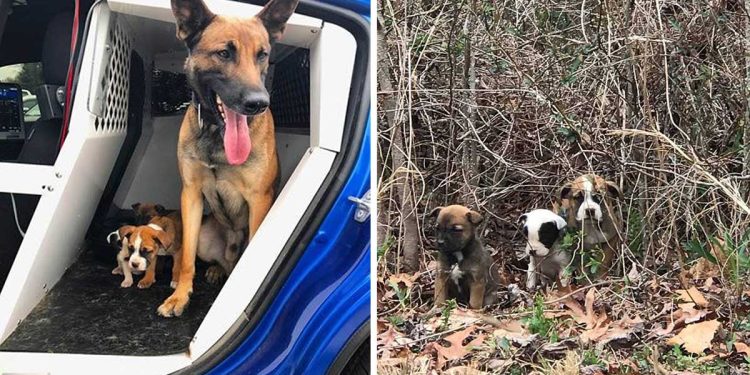 It’s no secret that puppies are a special edition of little angels who, with their pranks and tenderness, conquer even the hardest hearts. Unfortunately, some people don’t have the ability or responsibility to care for spoiled furry pets, leaving them in remote places out in the open and without any type of protection.

Three beautiful puppies were found in a dump, totally disoriented, hungry and very scared. Jordan Ennis and his canine companion Tek found them in time and gave them basic care. Jordan couldn’t believe what he was seeing, but he was ready to help the puppies and get them out of this dangerous place.

Tek, for his part, took care of bringing them confidence and security, fortunately the little ones are safe and sound and have been adopted.

A routine tour with a special rescue

Jordan is a police officer and when the puppies were found he was walking with his partner, a k9 named Tek. In fact, the canine policeman was the first to discover that something was wrong during the tour. The puppies were huddled between branches and sticks, an inconspicuous place, luckily Tek was able to sniff out the puppies and made the rescue possible. The officer comments that when they found the puppies, they all expressed great sadness.

Puppies were scared but receptive to help

Tek’s presence was essential so that the little puppies could feel confident and receive help from the officer, little by little the puppies gave in, Officer Ennis took them in his arms one by one so that they feel comfortable and safe and took them on patrol. This pair was undoubtedly willing to perform the best save and they achieved it by performing great teamwork.

The K9 and duty officer formed the best rescue unit

To date, it has not been possible to obtain any type of clue or information about the person who committed this cruel act. Georgia Department of Public Safety commented:

I knew no one was going to pick them up, so Ennis and his K9, Tek, took the puppies to headquarters where they were quickly adopted. A soldier never knows what he might find during a shift, but a day with puppies is a good day.

Fortunately, the puppies were found in time and will have a better life full of happiness and endless love. However, it is not right for small animals to suffer such things because of human bad decisions. It depends on us that the abandonment and mistreatment of furry people cease completely.