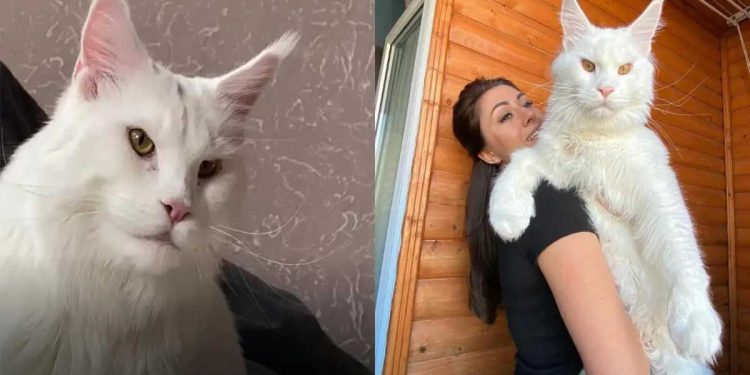 kefir, which has become an attraction on the Internet, scares with its size and weighs no less than 12 kg.

There are cats of all shapes and sizes, but kefir is special. It’s the largest cat in the world, and judging by its photos, it doesn’t seem like any other domestic feline can match it in size. This is a Maine Coon cat, one of the largest cat breeds, but the kefir is even too big for breed standards.

This huge pet, whose name is due to the fermented milk drink, lives in the Russian city of Stary Oskol. His owner is Yulia, who adopted Kefir two years ago when he was still a child and was not mistaken for a dog, as he is now.

This Maine Coon cat became famous for its enormous size

The giant cat has not yet reached its maximum size, said its owner, Russian Yulia. “It’s normal for Maine Coons to keep growing until they’re three years old. It’s funny how other people react when they see him because he’s huge,” he said in a statement. interview with Bored Panda. The owner says she found it in a cattery, a shelter for cats. During her first visit, she fell in love with the feline’s silky white hair.

The kefir diet is based only on vegetables with pieces of meat, excluding dry foods. According to Yulia, he is treated like royalty and part of the family, despite having difficulty dealing with his coat. The giant cat loses a lot of hair around the house, which the tutor pointed out as its biggest drawback due to the need for constant cleaning.

It’s funny how other people react when they see the cat because it’s huge. A lot of people think it’s a dog at first.

Although the size can be scary, Kefir is a docile cat.

In general, he is a super intelligent cat. Strangely, he senses when the climate in the house is bad and welcomes us. Kefir does not meow, scream, or spoil furniture. A truly perfect cat.