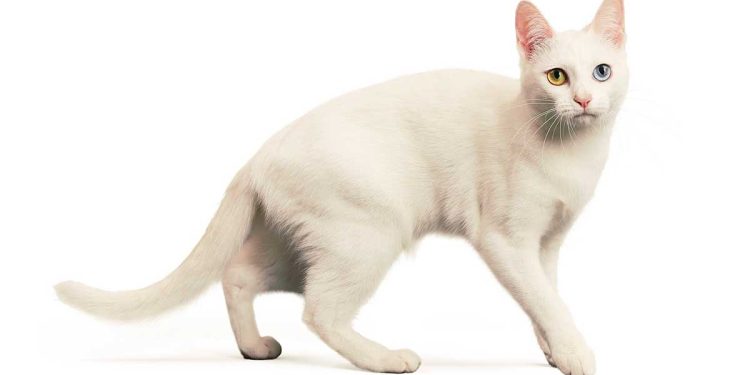 Khao Manee comes from Thailand and means “white gem” – referring to the size and color of this cat breed.

These medium-sized cats have pure white fur and bright eyes – hence their other name, diamond-eyed cat. Literally the “White Gems” of Thailand, Khao Manee is both rare and mysterious. They are an ancient breed mentioned in literature dating back to the 14th century.

Khao Manee is a natural breed of cats, meaning that they evolved without the need for human intervention. These cats are known for being energetic, intelligent and outgoing.

The breed is perfect for families with children or other pets, as it is a kitten who always wants to find new friends and start another play session. Loneliness can be a problem for these cats, so they thrive better in active families.

The Khao Manee cat has a slim and slender silhouette typical of oriental cats. They are elegant and graceful. Their bony structure is rather thin, and the front legs are slightly shorter than the hind legs. Their heads are also thin and triangular in shape, with rather rounded lines and expressive cheekbones. Their ears are medium in size and very open, especially in females.

Their muzzle, like their pads, is pink. Khao Manee kittens are born completely pink and turn white later. Generally speaking, it is a very graceful cat that resembles royalty standards.

But what makes Khao Manee’s cat so special and what breed norms are guided by are their eyes. Gem-shaped, their eyes look like jewels set in marble. Their color ranges from very light blue to sapphire blue, emerald green, green or sapphire yellow.

The white coat is short and smooth. The legs are strong in appearance and well proportioned, while the tail is of medium length, broad at the base and tapering towards a rounded tip. Khao Manee’s kittens are sometimes born with a dark spot on their head, but it almost always disappears before the cat is one year old.

Temperament and character of Khao Manee

When it comes to Khao Manee’s personality, you will instantly know that this is a super playful and curious cat! This breed will love to play the game and explore every corner of the environment – so make sure you have at least one cat tree installed for your kitten and preferably lots of safe furniture that can be changed.

The breed gets along well with children and other small pets, and will quickly become your kids’ best new friend. Adding on the playful side of Khao Manee, this is a companionable cat who always wants to be at the center of whatever action happens. If you are not at home most of the day, the cat may suffer from loneliness.

In fact, Khao Manee also became known for being very talkative kittens – so be prepared for a lot of conversations with your new feline friend!

Khao Manee is great for young children because the breed is so playful. Just be sure early socialization occurs and boundaries are properly set on both sides – and control the interaction of babies and cats.

As for other pets, Khao Manee goes well with many pets, including dogs. Don’t forget to reward your Khao Manee for good behavior when you bring him home to your family!

Khao Manee is a white cat. When it comes to grooming, most Khao Manee cats require very light maintenance – after all, this is a shorthaired cat, you can only brush it once a week. This will help reduce the chance of hairballs and tangles forming. Khao Manee are unlikely to shed, making them a good choice for allergy sufferers.

In terms of climate, Khao Manee tends to require warm temperatures rather than cold ones. However, you should always make sure that there is enough shade and fresh water in the hot months.

As with all cats, it is important to maintain regular veterinary check-ups on your Khao Manee to check for any health problems. Your veterinarian can help you develop a grooming regimen that will keep your cat healthy.

In addition to scheduling annual wellness visits with your veterinarian, make sure you pick the right rag for your Khao Manee environment – this can help keep your cat’s claws in good condition.

Khao Manee’s ears should also be examined regularly for signs of dirt build-up or possible infection. It’s also important to have your cat’s skin checked regularly, especially around the ears, as white cats are often more prone to developing skin cancer.

However, they require a lot of attention, be prepared to play with your pet. You will need to do a few ten-minute sessions daily, playing or setting tasks for your Khao Manee. They also enjoy a lot of cuddling and watch their owners around the house. Finally, for an active cat like Khao Manee, it is certainly necessary to provide enough space to run and satisfy its exercise needs.

Good quality cat food will suffice, although Khao Manee also enjoys some dishes like boiled chicken, fish. Drinking cow’s milk is not recommended as it can lead to an upset stomach. Khao Manee is a big fan of the daily routine, so the most important aspect of feeding – for this breed – is keeping to the schedule in which they can expect their food. They are also known to be a bit picky about their food, so work with them to find a brand and flavor that they like.

Remember that this is an active breed, so many beneficial nutrients will be needed to keep them at their peak physical and mental well-being. A lot of protein will help them keep up with energy levels, while essential fatty acids can keep their brains active.

If the cat is to be a pet and not used for breeding, they should be neutered at about six months, when the breed reaches puberty at a relatively young age. Like most cats, the breed needs regular vaccinations against common feline problems such as influenza and enteritis.

One of the problems associated with the Khao Manee breed is potential deafness. This is actually something that any cat can suffer from when combined with white fur and blue eyes.

Since they come from hot countries, they are not particularly adapted to cold weather.

They have a very low tendency to lose weight. However, these diamond-eyed cats are not immune to obesity if their diet and daily exercise are not properly planned.

In this breed, as in all breeds, periodontal disease and other diseases of “alleys cats” are quite possible. White cats with one or two blue eyes often have a higher tendency to deafness than other cats, considered a common problem. However, Khao Manee can be deaf and is less common than all other blue-eyed white cats. This indicates the close work of the breeders of these cats.

Breeding Khao Manee is not easy. Even though crossbreeding is prohibited, some people have always tried to sell regular white cats instead of Cao Mani cats. Prospective buyers need to be vigilant.

Now you know for sure that Khao Manee’s cat or kitten is extremely gentle and kind. Sometimes shy, but they are extremely loyal to their master, whom they love infinitely. Even if they perfectly adapt to the presence of other animals in the house, they are lonely enough, having only the attention of their owner. They enjoy living in apartments and being the subject of all conversation. Khao Manee is very lively and dexterous, loves to play and hunt. But the main characteristic of this cat is her meow. Note that it takes time for them to adapt to the new environment.

The Khao Manee cat breed is truly legendary. In ancient times, in the kingdom of Siam, this breed was considered privileged, and only representatives of the royal family could have these cats. On the territory of modern Thailand in ancient times there were different cats, some were considered sacred, some were considered to bring good luck. At different times, certain breeds were especially distinguished by any of the kings, however, the Khao Manee cat had a privileged status at all times.

Only in the modern world has it become possible to freely buy and sell these animals, although, even 100 years ago, it was simply impossible. And 300 years ago, for this they could be executed on the square. In ancient times, there were breeders of their own, and they were engaged in targeted breeding and improvement of the breed, preserving all its distinctive features and characteristics.

We can say that modern breeders only follow the inherited principles that were developed many centuries ago. Surprisingly, until 1999, the breed was distributed only in Thailand. In 1999, Colleen Freimut’s cattery began breeding these cats in the United States, however, despite all the efforts of this and other breeders, the breed has not yet been recognized by any felinological organization. That, however, does not prevent her from being one of the most ancient and desirable among cat lovers.