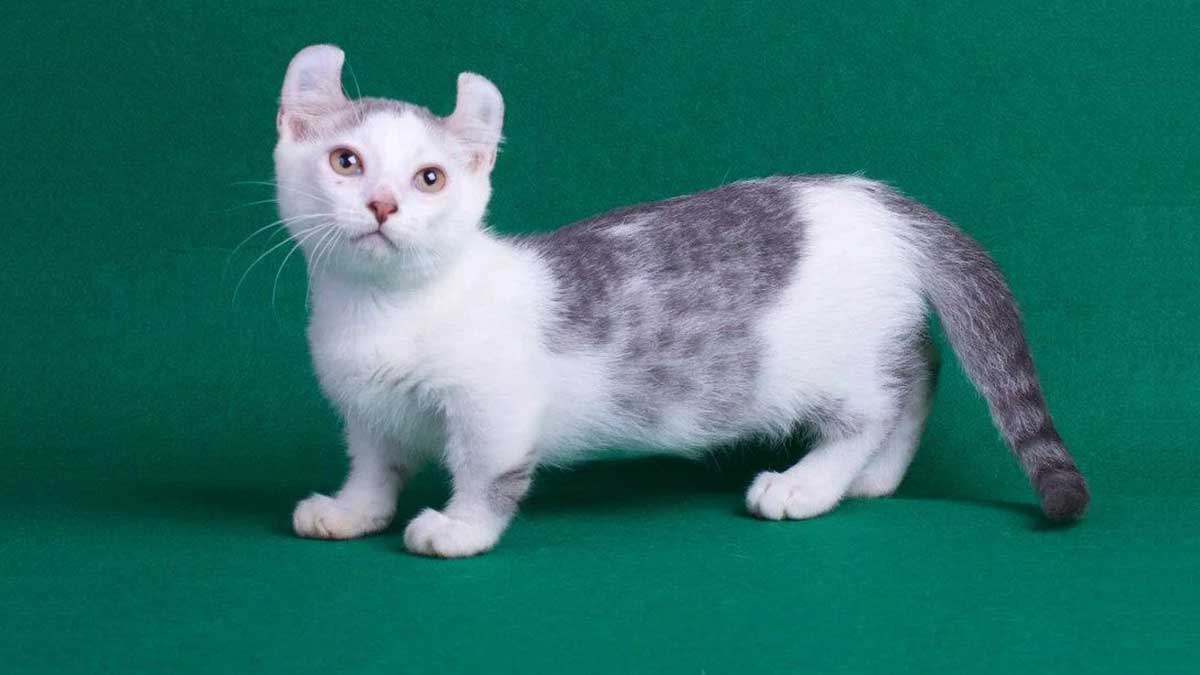 Again, the world was surprised by the new inhabitants. The ears are curved upright, the legs are short, the face is cute. This is a Kinkalow cat, a wonderful friend and companion in games, a beautiful apartment decoration and just a dear creature. The Kinkalow cat is still a rarity, the breed has not even come to exhibitions yet, but they are already talking about it. Let’s talk about such charms too!

The original look of the Kinkalow cat cannot be confused with any other breed. Short legs are always combined with bent protruding ears.

The head is round, like the body itself. The body is flexible, the muscles are developed, but it can hardly be called outstanding. The appearance of the kinkalow is far from bulky or clumsy.

Legs seem thick, spaced evenly. The front legs are shorter than the hind legs, and the tail is usually longer than the body.

Kinkalow kittens have straight ears at birth, but already in the first week of life they begin to bend. The ears get their final appearance by the age of five months. Partially, the auricle has a bend at an angle of 90-180 degrees.

Seals are pleasant to iron, because their fur is easy to recognize as soft, thick. The undercoat is well developed. The fur of this breed is long or short.

The colors are different: it can be a colorpoint and even an albino cat. Most often, chocolate kittens, bicolor, seal, tabby are born.

Size and weight of cats

Since the kinkalow breed was recognized by the Association of Miniature Cats, it means that the size of the cats is small. Yes, diminutiveness is the determining factor of these pets: body weight is 1.5-3.5 kg, and height is not more than 16 cm at the withers.

Table of approximate weight of the kinkalow cat by month

They paid attention to the appearance and recognized that it was quite original. Now let’s figure out what kind of character is inherent in kinkalow.

Although this cat breed has appeared quite recently, it is already possible to distinguish the characteristic features of its behavior. Kinkalow kittens are friendly from the moment they begin to comprehend more or less something in this world. The playfulness and kind disposition persist until the old age of the cat.

Cats are good at contact, they do not like to be without a man. However, they are in no hurry to impose themselves, especially if the owner is busy with something. But they can very much support the company, therefore the cat welcomes the attention of household members.

The low growth of the breed is not an obstacle for active pastime. The cat climbs higher and follows the life of those below with interest. Curiosity will make the fluffy climb even on the closet, if there is something interesting there.

The cat gets along well with other animals in the house due to its natural benevolence and curiosity. Seals communicate just as well with children of any age, aggression is alien to them. If they don’t like the situation, they get up and leave, switching to another object.

The kinkalow cat is not particularly “talkative”. A quiet meow is heard when the animal talks about its hunger or other need.

It was noticed that a cat of the Kinkalow breed is intelligent and inquisitive, which means that it can be easily trained to the tray and the rules of conduct in the house.

To keep the animal strong and happy, you can conduct lessons on the street. So the muscles will be in good shape, and the contact between the cat and the owner will always be established.

The pet walks calmly on a leash or harness, which is preferable to a free walk. Remember that the fluffy paw does not show aggression, but other animals on the street may very well behave unfriendly.

Energy and playfulness are adopted. You can watch with interest how the cat gets acquainted with the world of the street, studies crawling insects, watches the birds.

The Kinkalow breed turned out to be not particularly demanding on the environment, small growth does not prejudice its existence in any way.

The maintenance should include not only care and feeding: a playful purr needs a corner where he can frolic, and then have a sweet rest in some house or on a lounger.

The care consists in standard procedures. The coat of the breed is thick, and the coat is shiny and soft. To keep the coat in this condition, it sometimes needs to be brushed. Bathing is carried out 2-4 times a year. You can teach the animal to swim from an early age.

Periodically clean the ears and eyes, for this they use clean damp wipes or discs.

The claws are sheared once a month. There should be a scratching post in the house, which will also help keep the legs in order.

Kinkalow’s teeth are strong, and the mouth is usually healthy. Veterinarians still advise paying attention to her and brushing cat’s teeth with a special paste once a week for prevention.

The cat is not prescribed a strict diet. The animal is not inclined to overeat, therefore, a normal balanced diet is allowed. You can choose to feed your pet with a natural menu or ready-made food. Choose dry or wet food or natural products, you should think in advance.

In any case, the menu should be according to age, veterinarians and professional breeders have long ago prescribed a cat’s diet for months, starting from the birth of a kitten.

The molting period negatively affects the fur coat, so at this time the cat is given vitamins. If the food is natural, then vitamin and mineral complexes are prescribed by a veterinarian in courses.

The breeder, who decided that the new breed should see the light of day, approached the matter responsibly: this is one of the healthiest cats. She is characterized by endurance, unpretentiousness. With proper care, there are practically no problems. The complex of care includes a visit to a doctor, vaccination, antiparasitic treatment.

A cat can get feline diseases, but he has no genetic diseases. Even predispositions to them have not been identified. While this suggests that it is too early to draw conclusions, the breed is on its way to becoming. Therefore, owners must be careful and protect the cat from common problems such as infections.

Congenital disorders are long legs in kittens and straight ears. They are also acquired, but such individuals are not allowed for breeding.

The normal life span of a kinkalow is 10-15 years. There are also long-livers among the charms.

Few nurseries are engaged in the cultivation of this rare breed. Almost all of them are in the United States. You can knit a pet with a kinkalow, an American curl and a munchkin. The first mating is allowed at the age of 1.5-2 years.

Pregnancy proceeds as usual, and after two months, offspring are born. Kittens are examined and babies with long legs are identified. They do not meet the standards and are sold cheaper due to the fact that they are not suitable for breeding.

The birthplace of the original Kinkalow cat with protruding ears was the United States. Breeder Terry Harris in 1997 decided that it was possible to breed short-legged cats, taking the munchkin and American curl as a basis. Crossbreeding gave offspring with two gene mutations: one mutation was responsible for short legs, the second for curved ears.

The breed was registered by the TICA association. The name was given from the English words kink – “curl”, and low – “low”. The Dwarf Breed Association TDCA recognized the handsome men in 2008. While the kinkalow population has reached a modest ten, exclusives live mainly in the states.

The standard has not yet been finalized, there is only a description of the cats for today. It is because of this that kinkalows do not take part in exhibitions.