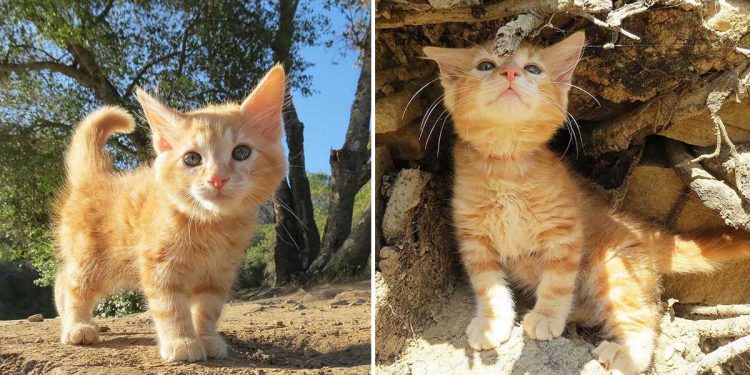 A little kitten found in a parking lot settled in so well with his foster family that they decided to adopt him.

A cute little kitten found in a parking lot was rescued by a kind-hearted person just in time and then insisted on staying with the family who helped and took him in, forever.

A foster care volunteer named Sam Christie, who has his animal foster home in Sacramento, California, came across an eye-catching post on Facebook.

The message mentioned a small kitten who had been found in a parking lot and was in desperate need of help.

A young woman working at a nearby business saw an orange streak under a parked car and decided to investigate.

At this moment, the vehicle where the feline was hidden started to move, but fortunately the woman was able to get the little one out just in time. The kitten seemed to be in poor health, he was just skin and bones, he was also very dirty and totally full of fleas.

Sam replied to the woman’s message and offered to take care of the kitten and help her until he could find her a forever home. It was no easy task, but the man was determined to do all he could to help the little orange feline thrive in his life.

It has been particularly difficult this year with the closure of shelters. Fortunately, I have the support of my community on Instagram, so I can often do these kinds of rescues on my own.

They put the cat in the car and searched the entire parking lot to see if they could find its mother or any other kittens, but there was nothing. The little cat was a little nervous and grumpy at first, but when he realized he was safe, he quickly calmed down.

In his new room he settled in easily and as soon as he smelled the food he jumped on the plate and ate all the food within minutes.

The man then gave her a much needed shower and the kitten, named Wilder, was finally clean and free of all fleas.

Then they wrapped him in a towel to protect him from the cold, and it was obvious he was only too happy to receive so much attention.

The other resident dogs and cats of Sam’s home were very curious about the newcomer and patiently waited to meet him in person.

But whenever they could, they sniffed through the door, which made Wilder very excited, he wanted to meet everyone. He was eager to interact with his new friends and foster siblings, so he found a way to sneak around so he could play with them.

Sam’s original plan was to foster Wilder until he was ready to be adopted by a good family, but the kitten had other intentions. Wilder began following all the older cats in the house, teasing them and playing with their tails whenever he got the chance.

The resident cats accepted him into their pack and took him under their wing, while teaching him various feline activities, such as climbing and wrestling. It took him a few days to fully adjust to his new family, but when he did, he also became very attached to his friend Oakley.

His family loves Wilder because he brings back memories of a deceased cat named Atlas, as they have the same energy and bravery. Generally speaking, Wilder had settled in perfectly with his new family, so Sam knew she couldn’t part with him and adopted him.

The whole point of parenting is to save lives and give them up for adoption, but sometimes that’s how it is and they stay forever. Turns out Wilder was the piece of the puzzle we didn’t know was there. ‘Our family missed her.

The adorable redhead loves spending time with his humans, siblings and friend Oakley, and is always nearby to follow suit.

Wilder now loves his new family and lives every day to the full, with all the love his loved ones give him.