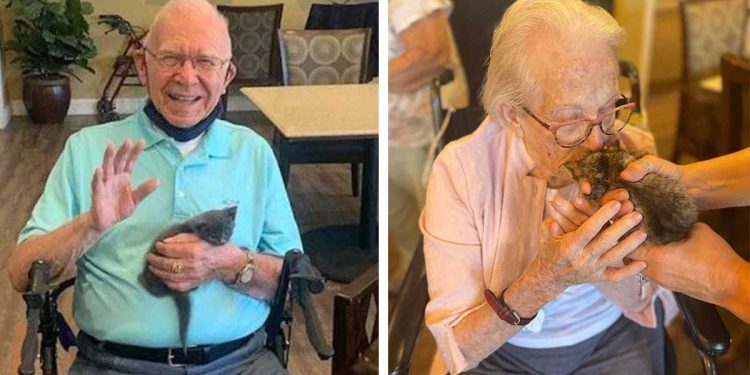 A fine example of pet therapy applied to the elderly comes from a retirement home in Orange County, California. This is told by a woman, Cathy, whose mother is a resident of the facility. According to his testimony made public to the Washington Post, it is clear that the arrival of a few kittens in the EHPAD has totally changed the lives of the elderly present there. Including that of her mother, who went from depressed to happy and full of life.

From darkness to light

“My mother was really sad and didn’t want to interact with people – she told the Washington Post – it was difficult for her to get out of her house after so many years.” And indeed, when the lady arrived at the facility for the elderly the Meridian at Anaheim Hills, as often happens with newcomers, she passed away completely. Until something very special happened.

Lori Irby, the manager of the retirement home, in fact, has become the foster family of abandoned kittens in the ASPCA shelter near her home. As some felines are very small, she decided to set up a playpen in her office to take care of them more easily. When the guests of the nursing home learned of the kittens, they asked to see them. So, in a short time, all the elderly residents fell in love with these kittens. Including Cathy’s mother: “We immediately saw a change in her. She had someone to kiss and love ”.

What was born by chance became first an experiment and then a real therapeutic project. In view of the results of the contact between the elderly and the kittens, the director decided to launch the “Kitten Therapy Day”. Every Wednesday is exclusively devoted to cuddling between the kittens and the elderly: each guest, for 45 minutes, in turn, takes and plays with the cats. For many, it’s the best time of the week.

The opinion of the guests

As mentioned, the elderly residents are excited about this novelty. “If you’re feeling down, you’ll come out happy, like you’re a new person,” said Shockley, 79, who has been at the facility for two years. “I feel like kitten therapy helps me both emotionally and physically and brings back many kitten memories from my past,” says Donald, a 93-year-old former manager.