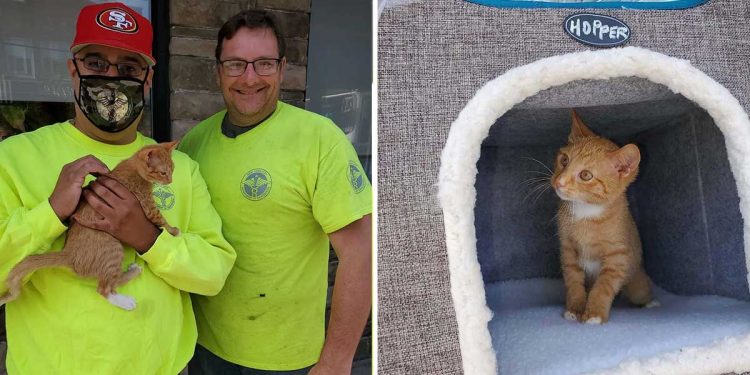 In Queens, New York, a kitten rescued just in time from a trash bag clings to the workers who rescued her

A little kitten clings to a couple of garbage collectors who saved him from a garbage bag, thanks to his multiple meows, he now lives very comfortably in his new home.

Last Monday seemed like a normal day for William Montero and John Kase, employees of the New York Department of Sanitation. As they went about their daily business in Queens, picking up trash bags and tossing them into the back of the truck, they heard a series of meows.

My first thought was: I hope this is a toy I hear. Unfortunately, it wasn’t.

This kitten clings to its rescuers

The two workers kept hearing the insistent meow coming from a garbage bag, so they thought it was an abandoned animal. When they opened the bag to investigate, they found a little kitten who was very scared, his heart was beating very fast and he needed help.

Somehow, a heartless person had put him in the garbage bag and left him on the sidewalk, but thanks to the workers, he was rescued just in time. They were surprised and decided to look for other cats in all the trash cans to make sure there were no more abandoned ones.

After searching the truck’s compactor for a while, they didn’t come across another stray, which made their day a little easier.

The little cat was a little nervous about the ordeal, but was happy to be safe with the workers. The two companions tried to put the little cat in a cardboard box to transport him, but he always climbed or crawled.

He’s a climber. We couldn’t leave it there.

Although the kitten was still too frightened, John decided to hug him to his chest to calm him down a bit and the therapy proved to be very effective. As he hugged one of his rescuers, the little boy slowly showed his true self.

John and William are animal lovers, so they decided to name the little kitten Hopper, after the back of the truck.

They then contacted Noah’s Ark Animal Rescue to inform them of the kitten’s situation, and the shelter immediately decided to help and took the cat in.

The shelter estimated little Hopper was around 10 weeks old and had an upper respiratory infection. Hopper received the medical care he needed to overcome his health issues, then moved into a wonderful foster home.

The kitten began his recovery with a loving family and is slowly progressing in the comfort of his new home. With the help of sanitation workers and rescue center volunteers, Hopper is on the road to a full recovery.

We just did what I expect of any normal human being.

The workers decided to visit Hopper and bring him a bed and supplies, to keep him comfortable until they could find him a forever home.

Fortunately, Hopper now has a bright future ahead of him and he will surely find a forever family soon.