The Cat Flushes The Toilet 24/7 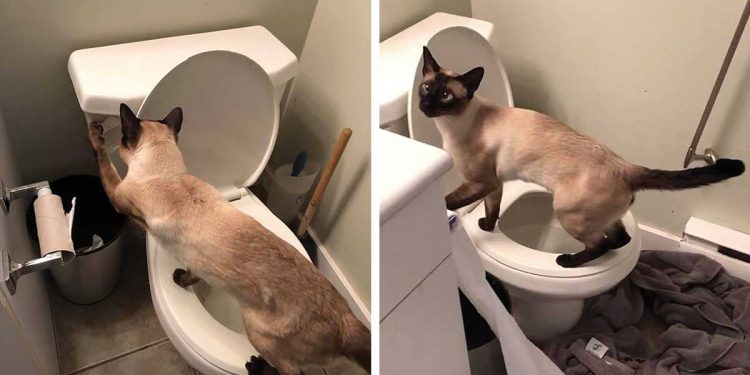 Sabrina Louise noticed an unusual situation in her bathroom when it started to flood, and the woman couldn’t explain why. A few times I heard the chain being flushed in the bathroom, but I guess it was a plumbing problem. However, when Sabrina decided to check, she found nothing wrong.

Apparently, Kai, her Siamese cat, has some sort of obsession with how the toilet works, and on one of his many bathroom visits, Sabrina caught him striding away.

He’s been fascinated by toilet flushes since he was a kitten. He likes to watch the water. When he was a year old, I caught him using the toilet.

A cat pulls the toilet chain 24 hours a day

At first, the woman assumed that Kai only liked spending time alone in the bathroom, but she soon discovered something else, her feline had learned to flush on its own.

He started blushing in front of me, and that’s when he got quite obsessed. I tried to lower the lid, but he’s still pulling on it. I tried to close the door, but he’s screaming.

It seems there’s no way to keep Kai out of the bathroom, it’s his favorite playground and he doesn’t care if he has to keep his mother up at night if it means he can. play with the toilet as much as he wants.

Right before bed, he tends to flush the toilet continuously. I yell at him, ‘Kai, don’t do this anymore. Get out of the bathroom. Don’t make me go in there. Then he runs off meowing and purring. Then a few minutes later he’s back there.

The situation with Kai and his bathroom mania has come to the point that Sabrina now has to turn off the water tap in her house before going to sleep. Kai is so obsessed that he even tries to open the water passage again, but the mechanism is difficult to move with his legs.

His mother claims Kai looks like a naughty boy all the time.

He does somersaults in his cat tree. He clings to it upside down. He is constantly in trouble. He loves opening cupboards and drawers and stealing things like chips, toilet paper, crackers and dog treats.

Sure, Kai is quite disobedient and mischievous, but Sabrina can’t help but accept that he’s quite cunning on top of that. He is a very opportunistic cat who knows how to take advantage of his mother’s carelessness.

Basically he flushes the toilet every time he’s awake, but now he tends to do it in the morning and evening because he knows that’s when the water flows.

But ultimately, Sabrina loves Kai just the way he is, and taking a cold shower once in a while costs her very little in exchange for a happy kitty.

He runs away when someone uses him and tries to flush some of his toys down the toilet. He especially likes to flush the toilet when I’m in the shower.